RUSH: I see where Senator Cruz is echoing things I said here in the first hour, folks. Do not get caught up in all this ’cause it isn’t gonna change anything. It’s fun to go through it, dissect it, and pick it apart. But don’t think any of this is gonna change anything. Comey’s out there giving red meat to all sides. In the process, though, this guy’s doing some amazing things. He’s admitting that he’s a coward. He admitted that he let Loretta Lynch shape the language used in describing the Hillary investigation. 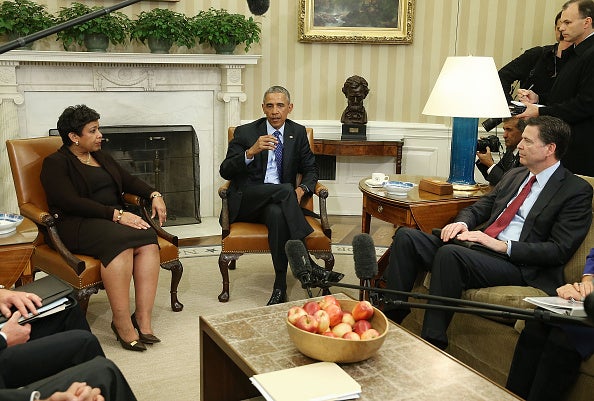 He has admitted that she pressured him to do that and that he fell for her pressure. He has admitted to orchestrating a memo leak! You know, the famous memos that Comey was said to have? When we first heard about Comey’s memos, we were told that Comey had, as a general practice throughout all of his years as a lawyer — after big meetings — that he would memorialize what had happened, who had said what, as an exercise in remembering what was said or in preserving the record should there be disputes.

We were told that he’d been doing this for quite a while, which led me to ask publicly here, “Man, I’d like to see some of the memos he wrote after conversations with Obama.” Well, then we learned that he never had but two conversations with Obama and really only one. The second one was when Obama called to say good-bye after he was leaving office, and the other time was talking about — I forget — whatever it was. But I’m sitting here thinking, is this…?

We’re supposed to believe with Obama over there in the White House and Eric Holder here as attorney general, then Loretta Lynch, that Comey (chuckling) never, never was aware what Obama wanted? It’s kind of like Lois Lerner. Everybody was saying they hoped they’d find the smoking gun memo that directed her to discriminate against Tea Party groups at the IRS. You’re never gonna find that because one’s not needed. Obama hires like-minded people who know what to do without having to be told.

I think Comey is shaping up to be one of these people. Anyway, we later learned that Comey only started writing memos after he met Trump, because he thought Trump was a liar, and he thought Trump was a mean person, because Trump was lying about him and lying about the FBI. So what did our brave, young FBI director do? Well, he called a buddy of his at the Columbia School of Journalism, Columbia University, and asked him to “share” his memos. This is not “sharing” anything; this is leaking!

Comey leaked his own memos through a third party, and they ended up as news stories! (chuckling) He’s a leaker! He’s an admitted leaker. He admitted that he leaked documents that were his and in his possession, and he wanted them out there, and do you know why he leaked them? He admitted that. Because he wanted a special counsel named! He wanted an independent prosecutor. He wanted somebody to take over once he had been fired. He wanted somebody to look into this. Now, when I say, “Don’t get all hot to trot about it,” I know you’re gonna pay attention to it.

But my only point is, don’t get caught up in it to the point that you expect it’s gonna change things, because it isn’t. None of this is going to change, because none of this is even possible to change the media’s mind. There is nothing… In fact, if Comey would have come out and said today, “CNN, you are totally off base on this and you’re misreporting what’s happened here and the president was never a target,” they would not have stopped.