This was her brand; this was her image. It was bought, it was paid for, it was fed, it was built up; and now what’s happening to her? She is delirious. She cannot live in reality. She cannot accept what’s happening. She has been rejected. This is the most-cheated-on woman in America, including by her own party. If there’s anybody the Democrats — and I’m serious about this. If there is anybody the Democrats owe, it is that woman.

She ate the excrement sandwich that being married to that guy was, from the time he was governor of Arkansas, all the affairs, all the women, all the allegations, and she was the loyal trooper, blaming the right-wing conspiracy, destroying the women accusers, maintaining his administration and the Democrat Party. And if anybody has ever been owed, it’s Hillary Clinton. And 2008 was supposed to be the big payoff, and they threw her under the bus for a young untested, unproven African-American guy with an exotic name. And she gave them another chance to love her. She gave them another chance to accept here. She went even so far as to work it with Debbie “Blabbermouth” Schultz to rig the primaries against Crazy Bernie so the Democrats could not throw her under the bus.

And she still got beat by some guy they think has no business being in politics, doesn’t know what he’s doing, in their minds hates women, is abusive to women, doesn’t like anybody. A guy who shouldn’t have got 20% of the vote and beat her in an electoral near landslide, she’s going crazy.

In her mind, her party abandoned her, the Democrat National Committee abandoned her, even though they worked with her to rig the primary. Her money people abandoned her. Nobody helped her. Everybody left her and hung her out to dry. She couldn’t trust anybody. She’s dumping on everybody that worked in her campaign except for Huma. And it’s all happening in public.

She is blaming 19 different things and people for her loss, including — are you ready? A thousand Russian agents in Macedonia. Did you hear that one? Agents in Macedonia working to undermine her campaign. She blamed the Democrat National Committee. She blamed expectations. She blamed her polling units. She blamed the media. And in some of these cases, she is right. She’s out there saying, “I had too many expectations that were built up around my victory.” She’s complaining about all of the people who just assumed that she was gonna win in a landslide, but she was one of them.

You know, she wants to distance herself from these people, but she was involved in every one. Look, she’s the one that practically fell on her face leaving Ground Zero on July 4th or whenever it was. She’s the one who couldn’t stop coughing doing public speeches and blaming it on whatever else. She is the one wearing glasses here that are supposedly to prevent seizures. She’s the one that couldn’t name one reason why she wanted to be elected, what she was gonna do. For a woman who is the smartest woman in the world, she couldn’t even articulate liberalism! And that’s one of the easiest things in the world to do, and she couldn’t even figure out a way to do that and sell it.

When you stop and think, if you put yourself in her shoes — no, let’s not. When you imagine yourself in her position, psychologically, folks, she was supposed to be president twice and actually maybe three times. She was supposed to be co-president with her husband. And, as such, they gave her health care in 1993. Smartest woman in the world was gonna make sure we got national health care, and she was gonna get the credit for it, not her lug head, cheating husband. And she blew that.

In her mind, you don’t know how much she actually accepts and how much she lies to herself, but regardless what she’s telling herself, the end result is loss, loss, loss, humiliating defeat, unbelievable. And it’s got to be hard psychologically, when you measure that against what she expected, what everybody promised her, what she assumed. You know in her private moments in two different campaigns, she’s actually imagining being in the Oval Office with herself behind that desk. 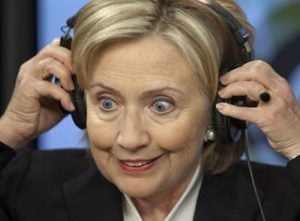 And let me tell you something else about Hillary Clinton. And you can see it, and you can listen to her speak. She is a true feminist from the modern era. She has a grudge about being a woman. She’s got a chip on her shoulder about it, as the ardent feminazis of the modern era, which I trace the beginnings, 1969, 1970. She is a product of all of these women’s studies courses where she was raised and she was educated and she was sensitized to the idea that life as a woman was the pinnacle of unfairness, the pinnacle of discrimination, the pinnacle of being insulted as a human being, and she still carries all that around.

And she still feels the need to prove herself as smarter and better than any other guy. And the evidence is she’s not even smarter or better than Donald Trump, who they all collectively despise. I defy any of you to actually put yourself in her situation and not be psychologically ripped to shreds.

Now, you think, “But Rush, you gotta know, you can’t win everything. It’s tough and tumble. People say things. She’s run the war room.” Yeah. Yeah. But I’m telling you, she’s had a lifetime of hype as the best, as the smartest, as the most entitled. She’s living in this fantasy world now. She goes out and does these personal appearances and she’s got, it’s not fans, she’s got a cult. There’s a cult of like-minded women that will show up wherever she goes, 15 or 20 of them, maybe 50, depending on the venue. And they treat her like she has been victimized, the biggest injustice in the history of humanity. Her defeat in 2016.

So she is coming apart right in front of our eyes. We’re witnessing it. We saw it during the campaign. It’s just that many didn’t have the confidence to say that’s what it was because even we couldn’t imagine her losing. How many times have I told you over the course of the years of this program how frustrated I have been to encounter people on our side who are scared to death of this woman?

Do you remember me telling you that, how frustrated I’d get? They would greet me and say, “There’s a 75% chance Hillary Clinton’s gonna be president.” So what? “It’s over.” Hillary Clinton… There were people on our side that were mortally afraid of this woman for whatever number of reasons. They could not imagine that the Clinton machine would lose; neither could she.