RUSH: Okay, Comey. Congressional hearings. If I’m not mistaken — and this is just a sense — for the past couple of days — well, actually it’s been longer than that — the media has been unable to contain itself with its anticipation and excitement. It’s almost like kids on Christmas Eve and through the whole month of December. So excited. So hyped up, so amped up, so eager to see what new cool presents are gonna be under the tree. They’ve done this with Sally Yates, previous Comey testimony, John Brennan.

There has been an endless parade of Obama-era embeds that have been called to testify before the Senate and House intelligence committees, and every one of these witnesses has been expected to blow up the Trump presidency. Every one of them has been expected and it has been widely hoped that they contain the bombshell news that will blow up the Trump administration and forever prove that Trump worked with the Russians to sabotage the Hillary campaign and win the presidency.

And since nobody has offered anything like that — now, see, I’m reminded of something I want to say here, and it’s a little bit off point. I referenced something yesterday. When this NSA leaked document from Serenity Fields — what is her name again? Yeah. Why do I have a name block? Yeah, but I’m a broadcast professional. I ought not have a block on remembering this name. Reality Fields? Reality Winner. Why do I think it’s Serenity somewhere? I’m not thinking of serenity anything. I can’t remember this babe’s name. I need to just scribble it in front of me.

At any rate, when we discussed this yesterday, I referenced something, because something really struck me. Didn’t Obama assure us a couple of times in 2016, both before the election and after it, that nothing of the sort could happen. It was Obama who told us that there was no way the Russians or anybody outside could tamper with the actual process of casting and counting votes. Obama also told us that he called Vladimir Putin and told him to cut it out back in March and that Putin was scared. And when Obama told him to cut out, that Putin did cut it out.

Then this document comes along and indicates the Russians were in fact attempting to hack into voter databases. I think it’s targeting voter registration. Anyway, all of this Obama assured the country it couldn’t happen. And now today people are writing about that and remembering it as I did. The reason to me that it’s important, Obama said it twice at least in 2016. He said it once before the election.

Now, in that instance it would make sense that Obama would pooh-pooh any idea of the Russians affecting it because they all thought Hillary was gonna win in a landslide. And so there would be nothing in it for them to start kowtowing and bellyaching, complaining about Russian involvement. They wouldn’t want anybody thinking Hillary’s win was tainted. So whenever the subject came up, Obama just blew it away. “No, no, no, it’s not possible. I’ve talked to Vladimir about it. I told him to cut it out.”

Then he talked about it, he said the same thing after the election, in December, during the Trump transition period when everybody was all hepped up about Flynn and all this other stuff, Obama assured everybody this wasn’t possible. Now, at that point it would have been advantageous to allude to possible Russian involvement because they were trying to make that case in the American people’s public mind.

But now this document comes along and contradicts what Obama told us. So the question arises, did Obama lie? Was Obama lying to us? If so, why? Did Obama not know? Anyway, the anticipation for Comey is building, because whatever has happened, there isn’t enough to go anywhere near proof. There just isn’t any evidence. Even this leaked NSA document that was reported on yesterday is not evidence.

There isn’t any evidence that Trump or his people worked with the Russians to screw Hillary out of the presidency. There just isn’t. And yet every new witness that troops up there, the media cannot contain themselves. And they are convinced that every new witness is gonna come up with the bombshell. And Comey is due tomorrow. And the networks all over the world are brooming regularly scheduled programming in order to cover the Comey testimony live. They’re brooming everything. I think in even some countries they’re brooming coverage of soccer. You do not know how big that is.

You think preempting The Guiding Light is bad. When they preempt soccer over there, that means they really think that it is big and they are preparing to do this all over the world. Since expectations have been built, Democrats are trying to walk back Trump being impeached because their left-wing lunatic bases have been led to expect it. 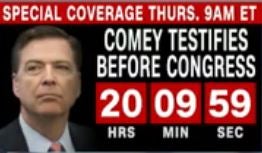 xIs Comey worried about anything? I mean, the media’s practically promised to make him the hero of the century if he’ll just nail Trump. The media has let it be known, they’ll look past whatever Comey does. If it crosses the line, they’ll ignore it. They’ll celebrate Comey as the hero of our generation if he’ll just nail Trump. And yet Comey’s still backing away from it, via his surrogates.

RUSH: You may not know this. Just three days ago James Comey refused to answer any of the questions submitted to him by both Democrats and Republican senators in written form before his hearing scheduled for tomorrow. And there wasn’t any outrage from the senators or the media when Comey refused. He was asked seven very straightforward questions about who he had discussed things with and his memos. He refused to answer a single one of them. We still have no real evidence that there are any Comey memos, for example.

And so ABC News has been reporting that Comey is not going to say that Trump impeded the investigation. Now, I don’t doubt that Comey is going to say things that will imply that Trump made him nervous, that he didn’t feel comfortable being alone in the same room with Trump. I can see how that would go. You know, you’ve seen the story already that Comey has reportedly said to somebody, “Don’t leave me in the room alone with him.”

Well, who knows what that’s about, but I can tell you how it’s gonna be conveyed. Comey was so afraid that Trump was gonna pressure him. Comey was so afraid he was gonna be challenged. Comey did not want to enter that room, he did not want to undergo the intense pressure of the president to compromise, even though nobody knows that was what was gonna happen. It was all made up. These people have built up expectations for Trump being impeached. They have built up expectations that there is voluminous evidence that Trump conspired with the Russians. And there isn’t any.

It’s fascinating, actually. There’s not a morsel, there’s not a shred of evidence anywhere that any of these things that have been alleged happened. It doesn’t matter. They’re not gonna let this go. They’re not gonna let this go to the midterms of 2018. This is their campaign issue, that they were robbed in 2016. It was Jeff Sessions, supposedly, that Comey said, “Don’t leave me alone with him in that room!” The source for this is anonymous too. We don’t know who it is that reported this to the Drive-Bys. That Comey supposedly said to Jeff Sessions, “Don’t leave me alone with him, no, no, no.”

Get this, folks. Washington, D.C., bars, places that dispense adult beverages, are opening early tomorrow for the Comey televised testimony. I’m not kidding you here. Some Washington, D.C., bars are going to open at 9 a.m. tomorrow in order to host viewing parties. They’re gonna have food. They’re gonna have adult beverages. They’re probably gonna have pinatas, pin the tail on the donkey, dartboards, whatever else. They are recruiting and inviting customers to come in and consume adult beverages at 9 a.m. as the Comey testimony. This Super Bowl of politics is how this is being hyped, set up.