RUSH: Well, now I gotta click on the link. Hang on just a second here. What am I supposed to see here? There’s a controversy brewing, I don’t even want to tell you. The one in red is the Photoshop? (interruption) Yeah, I see what you mean. And are they still using that one? All right. All right.

Let’s move into Tiger Woods. I had a bunch of questions about that. I was just informed that ESPN Photoshopped the mug shot to try to make tiger look less whatever he looks. And I had not seen ESPN, I haven’t gone to their website, so the staff clued me in. And I’m looking at it now and they have changed it, there’s no question they Photoshopped it. They’ve added a little hair and combed it or made it look like it’s combed and the eyes look a little brighter and more focused than in the real mug shot.

Now, this should not surprise anybody. This fits perfectly with today’s ESPN. What are they doing here? What are they doing by Photoshopping Tiger Woods to make him look not as whatever he looks in the real mug shot? What are they doing? So I’ve had a couple questions, because the stories that have accompanied the news that broke yesterday morning was that Tiger is earning $45 million a year as a corporate sponsor even though he hasn’t won a golf tournament this century. Well, that’s not true, but he hasn’t won a golf tournament in a long time. He hasn’t played competitive golf in a long time.

Well, yeah, it’s a payback. Why did Les Moonves, when he hired Steven Colbert say, “I don’t care about ratings. I want the buzz”? Okay, it’s hip, it’s this. Now, in the case of Nike, Nike was Tiger’s first sponsor way, way back when he went pro in 1997. Phil Knight loved Tiger Woods. I was at that Masters for a couple of days, and my friend Howard Slusher worked at the time for Phil Knight in his office, the founder of Nike.

It was a Friday night and we’re all sitting somewhere. You rent a house when you go there. And Phil got a phone call. Tiger was over playing video games, and he had summoned Phil, and Phil bolted out of that chair and left the house and went over to see Tiger. Tiger was it, I mean, owned everything. The Nike endorsement, I don’t think they’ll ever abandon Tiger Woods. It’s a personal thing, and now it has become a protective thing. I don’t think Nike will ever — you know, Nike had to get rid of the club division, the golf club division because Tiger started playing so poorly nobody was buying Nike clubs. 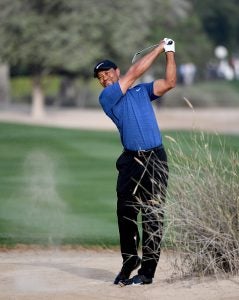 It’s not based on an up-and-down business relationship at all. I don’t think anything will ever, unless there was someday a total turnover of people at Nike, but even in that case… I can’t think of the other outfit. Just a mental block. I know who it is. I can’t tell you right now. They make up the other $20 million.

The point is that much of this Tiger is being paid for all the great stuff in the past. He has in the past sold gobs and gobs of stuff. He’s also being paid so nobody else can get him, ’cause everybody in the golf world is hoping and praying that Tiger will come back and be reborn and be the Tiger Woods of 1997 to 2005. They’re hoping. And they want to be there if he is. And they want, in his mind, to be the ones that stuck with him. So there’s much more to these endorsements than just the dollars and cents of what he’s selling now.