RUSH: Now, here’s Angela Merkel. This is yesterday in Berlin speaking about the recent NATO summit.

MERKEL: We are convinced transatlanticists and precisely because we are we know that transatlantic relations are of immense importance for us all. They rest on mutual values and interests, particularly when we are in times as we are in now of intense challenges. The last few days showed me that the days where we could completely rely on others are over.

RUSH: The last few days showed me that the days where we could completely rely on others are over. Boohoo. Completely rely? This cultural rot or shift, whatever, is not just contained within our borders. This is happening all over the world. I’m talking about values that were timeless, time-honored, self-reliance, hard work, all that sort of stuff. Now it’s crying time if you have to go it alone, crying time if you have to depend on yourself, very, very bad, it’s dangerous.

RUSH: Back now to Angela Merkel and the beer hall in Munich. We have here a socialist-leaning leader who wants to open her borders to virtually any and all because she doesn’t have a birthrate replacement level sufficient to keep factories open in Germany. Germans are not having children at a replacement population level. That’s why Merkel needs all these refugees for her workforce, so she says.

Germany has the fourth strongest GDP in the world, economy. And for her to stand up in a beer hall in Munich and say that Germany and Europe must now stand up and take care of themselves, that is a victory, that is a massive Trump victory! But the left and the media: “He insulted Angela Merkel! Can you believe what he did? He insulted, this pig, this boorish brute, he insulted Angela Merkel. This is not fair. Oh, this is why we’re going to hell in a handbasket in America. This is just so bad, it’s so rude.”

But it’s the exact opposite. At long last, Germany may work toward not having America pull their bacon out of the fire every decade or so. It would almost be, not quite, it would almost be the equivalent to the Democrat Party saying, “You know what? We’ve just noticed that it’s better for Americans to rely on themselves, to become self-sufficient and productive and happy, rather than depending on massive government.”

You can’t see that happening, right? That will never happen. There will be the random Democrat here or there that says it before he gets slapped and spanked and thrown off the reservation, but as an official pronouncer for the Democrat Party, you’ll never hear that. But that’s what we effectively just heard from Angela Merkel in the beer hall in Munich. It is a big deal. 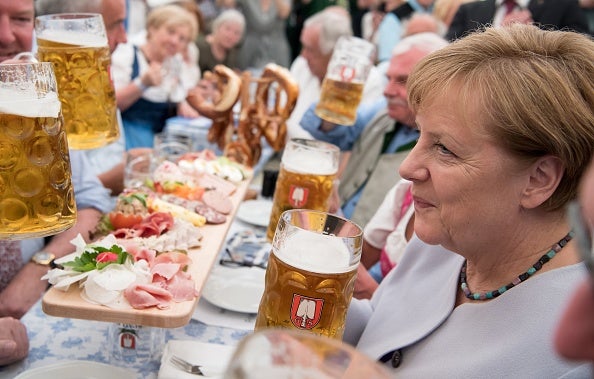 Here’s CNN. At the Sunday campaign event — this is in the beer hall in Munich. A beer hall is the equivalent of a bar, right? Can you imagine one of our candidates campaigning in a bar? Actually, I think Hillary did. You know, Hillary loves to bend the elbow. In fact, the Hillary Elbow Benders Club, did you know that she’s president? And the hot sauce too. Oh, the hot sauce. It’s what she does with it that people don’t know.

“At the Sunday campaign event, Merkel said that Europeans would continue to work in friendship with the US, the UK and others wherever possible, including Russia, but stressed her view that Europeans must be self-reliant. ‘We need to know that we have to fight for our own future and destiny as Europeans,’ Merkel said.”

This is after Trump gave her what-for. Isn’t this as it should be? I mean, we’re not saying we’re gonna abandon them. This was all them paying their fair share at NATO, which they’re not. They’re a little bit below the minimum requirement. But I have to say the contrarian in me, when Merkel says here in the beer hall in Munich, that we Europeans have to fight for our own future and destiny as Europeans. It’s gonna be hard to do that when your borders are open to all kinds of refugees from you know where.