RUSH: You know, I meant to mention this yesterday. Let me mention it now and get it out of the way, because this video has gone viral. It reminds me, I got another email today when the president and his entourage arrived via helicopter at the tarmac in Tel Aviv to split for Rome, the helicopter doors open and the president was the first out. The email said, “This guy… You know, after yesterday, I would think this guy would know better! He doesn’t let his wife get off first!

“He storms out, says, ‘Look at me, look at me,’ and his wife comes out meekly a little bit later. It’s unreal the way Trump treats his wife.” I said, “I’d better address this.” Ladies and gentlemen, there is a protocol rule that the president of the United States is always the first through any doorway, including wives, spouses, mistresses, daughters, any other women. The president goes through every doorway first. You know who told me this? Trump! You know how I know this? It’s because he was apologizing for going before my wife through a doorway one day.

He said, “It’s a rule. Presidents have to go through the door first.” I looked into it, and I found out it’s true. It is official presidential protocol. There are reasons for it. (sigh) I don’t have enough time to get into them now, but there’s a reason why presidents are first through any door, particularly in public. The president’s the first off Air Force One, the first off the helicopter. Now, the reference to, “After what Trump did yesterday with Melania, I don’t think he should ever be the first off! He should always show deference to her!”

They’re walking on a red carpet. They just arrived somewhere. I don’t know where this was. They’d arrived… Maybe it… (interruption) Was it Israel? It wasn’t Saudi Arabia. Okay, so they’d arrived in Israel, and Melania is trailing Trump on his left side and catches up and he reaches back, and she touches his hand and draws even with him, and then they continue on to wherever they were going. When this video happened, I first saw it on one of my tech blogs filled with obscenities about what a reprobate Trump is.

“Now his marriage is falling apart! Now his wife doesn’t respect him. Look what she did! She slapped his hand away. I mean, right there in Israel when the world’s cameras are on him, she just slapped his hand away!” That’s not what happened. (interruption) Is that what you think happened? She did not! It did not… That is not what happened. He was reaching back to make sure… (interruption) She’s in heels! Everybody’s moving past. He reached back to make sure she was there, and she gave what was the equivalent of a fist bump. He reaches back, “Are you there?”

She touches his hand to let him know she’s there; everything’s fine. She did not slap his hand away. It was a modified fist bump. My wife hates fist bumps. When I give her a fist bump, you know, she kind of slaps my hand away. She’s not slapping my hand away; she’s doing a fist bump without making a fist. That’s what that was! Do not doubt me. There is no way that that’s what happened. But the anti-Trump corps wants to make it look like, “Everybody hates Trump, including his wife, who knows what a pig he is and who knows what a reprobate he is. 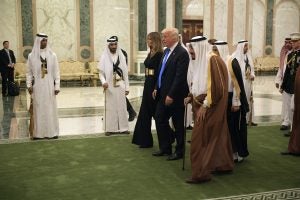 “Here he was reaching back, trying to drag her along because she wasn’t keeping up — because she doesn’t want to be there because she’s smart enough to know she should never be anywhere with Trump because Trump’s a pig — and she was lagging behind! He reached back to yank her forward like a caveman, and she slapped his hand away.” That’s not what happened. If you look at it and if you know these two (as I happen to) he’s reaching back. Presidents also walk ahead of everybody else, including going through doors first.

And if you paid attention to other video on this trip, you would have seen evidence of that. She’s either a full yard and a half behind or a step or two. It’s the protocol. But that was not her slapping his hand away. But it has gone viral, and that’s what everybody thinks it was, because — and look at what they’re imagining. “Yeah, he’s just a PIG! She regrets marrying the guy, and she wanted to publicly humiliate him for all of us! She knows he’s hated, and she knows it’s justified. She was doing it for us.” I mean, some of the stuff that’s out there? I’m tired of the insanity. I’m tired of it.

RUSH: Here’s Felicia in Tulsa. Felicia, I’m glad you called. Great to have you here. Hello.

CALLER: Thank you, Mr. Limbaugh. May I call you Rush?

CALLER: Oh, absolutely, sir. This is an honor. I know you know that I know this is an honor to talk to you. (chuckles) So what I was calling in about was everybody’s making a big deal about how Trump is treating Melania. But nobody said anything about Obama completely ignoring and not acknowledging Michelle when he won the Illinois state Senate seat.

RUSH: Oh, no, you know what it was? Felicia, you’re exactly right. I’ll tell you what this was. Oh, my gosh, this is exactly… I remember commenting on this the next day. This was, I think, the 2004 Democrat convention, and Obama was the keynote speaker. He was the guy the Democrats wanted to showcase for the future, and they had Michelle (My Belle) introduce him., and she just did a bang-up job.

I mean, she made it sound like this is the only man on earth anybody ought to like, look at, pay attention to. She made herself sound like the luckiest woman on earth to have had his babies (and what had to happen for that to happen). She made it sound like this guy was the closest thing to divinity on earth. She just went on and on and on. She kept referring to, “My man! My hero! My one and only! Barack Obama,” and he walked out and ignored her. I will never forget it.

This was one of the best introductions of anybody I have ever seen, and he flat-out walked out there, and it was as though the Chamber of Commerce had introduced him and the person was off the stage. She was still on the stage, and when he spoke, he barely even referenced her. (impression) “Thank you, Michelle. I appreciate that.” And I said, “My God, this guy expected it. He probably wrote it!” I thought it was one of the greatest disconnects I had ever seen. I’m not kidding you, folks.