RUSH: Monica Lewinsky wrote an op-ed yesterday calling Fox News’ coverage of her relationship with Bill Clinton a nightmare. She said: “My character, my looks and my life were picked apart mercilessly.” The New York Times op-ed headline: “Monica Lewinsky: Roger Ailes’s Dream Was My Nightmare.” 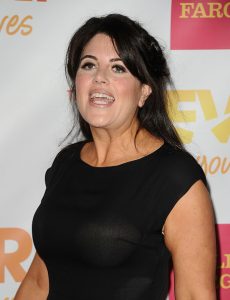 That’s right. Monica Lewinsky, who knowingly had, willingly, eagerly had affairs with Slick Willie in the White House, brought him pizza, brought him cigars, experimentation with cigars, you know every detail. Semen-stained blue dress. Somehow it’s Roger Ailes’ fault, because Roger Ailes started Fox News. And then it’s Matt Drudge’s fault because Matt Drudge ran the story after Newsweek spiked it. She never once blames Clinton. Never once. And she never once blames herself. Well, when I say she doesn’t blame herself, I’m including her mouth. You can’t separate the two when you’re talking Lewinsky. Whether you’re talking Monica Lewinsky or the Lewinsky, you can’t separate the mouth from — (interruption) No, she didn’t blame me. But I kind of feel left out as a result.

Anyway, she wrote: “Truth and fiction mixed at random in the service of higher ratings. … On Fox, it seemed, no rumor was too unsubstantiated, no innuendo too vile and no accusation too abhorrent,” said the former White House intern. “The comments on television and online were excruciating. I ceased being a three-dimensional person. Instead I became a whore, a bimbo, a slut and worse.” Wasn’t it the Clinton team that called her these names? Sidney Blumenthal came up with these descriptions of her. It was the Clinton team that called her all these names.

What Fox News reported about Monica turned out to be unfounded? I can’t think of anything they said that was unfounded. Linda Tripp, Linda Tripp is the person who was destroyed by the media, Saturday Night Live, for example, not Monica Lewinsky. Monica Lewinsky is still famous and she’s still a curiosity figure. 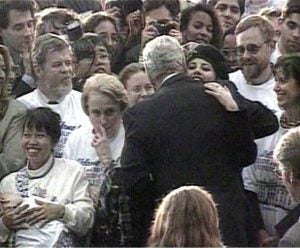 Do you realize how many women to this day are still jealous of her like Nina Burleigh of TIME Magazine? She wanted to give Clinton a Lewinsky for saving abortion. Well, Lewinsky did. She was jealous of Lewinsky. But to blame Roger Ailes? You talk about a pile-on? It’s just pathetic. I was thinking about Ailes’ stories the other day, and in my little (sigh) remembrance, I forgot to tell maybe one of the most poignant, and it won’t take long. Roger had become a very good friend, and I told him not long after I got to know him…

You know, we’d share each other’s family history and growing up — what life was like and so forth — and I had shared with him that my father felt like a failure because I had not gone to college. My father could not convince me to go to college and, as such, thought that he was a failure at preparing me for life and to be successful. And he had tried as hard as he could to impress upon me the importance. But, you know, I loved radio, and there was nothing that was going to get in the way of it. And I telling Roger this. I told him why: The Great Depression was my dad’s formative experience.

Well, one year Roger and I, over the Thanksgiving holiday, were gonna join a friend on a boat — a yacht — cruising the Bahamas. It was Bob Mosbacher, who was the commerce secretary for George H. W. Bush. Before that, we were gonna stop in New Orleans for the wedding of Carville and Matalin. So we went to my house, stayed at my brother David’s house for Wednesday night and Thanksgiving, and then on Friday we flew down to New Orleans and went to the wedding.

That’s where Stephanopoulos got nervous about posing for a picture with me, ’cause he was afraid I’d say mean things, he said. Anyway, then we went to the Bahamas, had the weekend, and came back. Well on Thursday, Thanksgiving morning, I got up later than everybody else. I’m walking down the stairs, and I hear Ailes holding court somewhere (it was in the living room or kitchen) and I stopped. I was almost all the way down the stairs. He was telling… My father had passed away by then. He was telling everybody my uncles and aunts and cousins. Everybody was there, and he was… It’s kind of embarrassing to say.

He was spending a lot of time telling them how important I was, how great I was, that they should have no concerns whatsoever, and that he… We were just getting ready to do the TV show or were in the middle of it. He had totally invested himself in my career. He said that I was that successful and important, and it was one of the greatest endorsements. I feel fortunate to have been able to hear some of it. It was just… Folks, it was beautiful, and he did this simply to calm the worries of my family.

Remember, I was successful, but I still hadn’t gone to college, and it was radio, and they didn’t understand radio. They thought could end any moment, and it wasn’t the law, and it didn’t have a college degree. So he was taking what I had told him about my father and family’s fears and trying to quell their fears and calm them. It was so complimentary; it was embarrassing. I went back upstairs and delayed coming down by a half hour just to not let anybody know I had heard it. Anyway, that’s just one of the many details of Roger Ailes that I could share about who he really was.