The caucus chairman is Darren Parker, he says, “This is a very unusual situation, and we are collectively trying to figure out a path forward to address what happened and make sure these things do not happen in the future,”

Maxine Waters was going on and on and on about Trump and impeachment and all this other inane stuff that she has become a star — one of the greatest indictments of the Millennial generation, quite frankly, is that they think this woman is an oracle of brilliance and unheard-of common sense.

We have audio sound bites of the California Democrat convention trying to shut her down. This was Saturday night in my adopted hometown of Sacramento. She was addressing the African-American caucus of the California state Democrat Party. And during her remarks she’s interrupted by a committee staff member who was then escorted away from her. Here is how some of it sounded.

WATERS: He had that meeting that I just alluded to with the Russian ambassador and the foreign minister, bragging again and talking about —

RUSH: Somebody made a move on her. Somebody went out there on the stage, tried to take her microphone away from her. It didn’t work. She got the microphone back, got the crowd riled up for impeachment, and she let loose. Well, just listen to it. This is what followed. 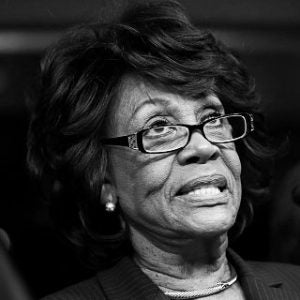 RUSH: It went on and on. You know what this reminds me of? In the first term of Obama we had all these sound bites of school kids being forced to sing, pledge allegiance to Obama type songs, “Barack Hussein Obama, yeah, yeah, yeah, Barack Hussein Obama!” “Impeach 45!” So they tried to take her microphone away and somebody in the audience said, “Hey, hey, hey, hey.” They didn’t turn it off, they actually tried to take the microphone out of her hand.

Anyway, because they’re trying to walk everybody back from impeachment. That’s why they did it. They’re trying to walk — these lunatics. These are exactly the people I’m talking about. They buy every allegation they’ve been told. Can you blame ’em? They believe their own media. They believe their own polling. I mean, isn’t that what their media is about, being believed, being influential? They don’t know that the majority of the Democrat base is clinical, certifiable.

They don’t have anywhere near the degree of sophistication to understand the nuance the media is using here, so now all these people are walking back impeachment. Well, look at the Colbert audience. Colbert goes out there and announced that Comey’s been fired, and they cheer! And that’s not what they were supposed to do. They were supposed to be sophisticated enough to know that since Trump fired Comey, they now love Comey, but nobody sent ’em the memo.

So they’re cheering Trump firing Comey. Colbert is embarrassed, my God, my audience, idiots, oh, my God, oh, my God. So bring Stewart out there, they have to reprogram these people into hating Trump and not Comey, which they succeeded in doing.