The Democrats’ Hatred for Trump Is Personal

RUSH: Keith in Marietta, Georgia. I’m glad you waited, sir. It’s great to have you on the program.

CALLER: Thanks for taking my cull, Rush. It’s an honor to speak with you.

CALLER: The reason I wanted to call is that, you know, the term “Watergate” sure is getting thrown around a lot lately, and I want to postulate that there actually are some parallels here, but everyone has the players wrong. That is, whether it was the Russians or whoever that got into Podesta’s emails and the Democratic Party emails and so forth, they’re not The Plumbers that were hired to do the break-in. They are Woodward and Bernstein uncovering the corruption within the Democratic Party and the collusion with mainstream media. We should be giving them a Pulitzer Prize, not coming down on them and criticizing them.

RUSH: Let me see if I understand what you’re saying. You’re saying the people that hacked Podesta deserve a Pulitzer Prize?

CALLER: Absolutely, for uncovering the corruption.

RUSH: They revealed and uncovered the corruption and the lying and the stinking of the Hillary campaign as found in the Podesta emails?

RUSH: You know, that… Folks, let me tell you: That’s an interesting take. I know he’s being a little bit facetious here, but only partly, because it’s a fascinating thing. What the Podesta emails revealed was indeed a bunch of chicanery bordering on illegality — certainly corruption — throughout the Clinton campaign. And rather than anybody be upset at that, they’re upset that we know it! They’re upset that it was revealed. I’m sure they want people to think that’s part of the Russian collusion. But that’s not. That’s not Russian that happened there.

RUSH: Looks like Safety Harbor in Florida. Hey, Steve. You’re next. Welcome to the program.

CALLER: Hi, Rush. What I want to say is, let’s say Trump is impeached and run out on a rail because of Democrats for some Trump up charge or whatever. Then the Democrats get Mike Pence, and he is more conservative, more popular, more photogenic, more moral. I just don’t see where the Democrats’ endgame is with getting rid of Trump, because at least Trump might fluctuate a little bit. What do you think about that, Rush?

RUSH: I think this is purely personal and visceral with Trump.

What Trump did should never, ever be possible. This is personal. This is not issue-oriented. This is not… They know Trump’s not a conservative. I know this. I know they know Trump is not an ideological Republican. There’s so much personal. This is why they’ve become a hate group. Steve, they hate this guy. He beat Hillary! He’s out there laughing at and making fun of Obama, who is their savior. He put… The guy they hate, Steve Bannon, is sitting in his right hand; they hate Bannon. Bannon’s a pig. Bannon’s yuck. They hate all of this. This isn’t supposed to happen.

Nobody is supposed to get close to this. People who try when Trump tried are supposed to be so humiliated in defeat that they either commit suicide or go hide. The last thing they’re supposed to do is win. And if they win, they’re not supposed to start doing things that unravel what these people have been doing the last 55, hundred years. Trump’s got to go! It’s not tolerable. Now, they’ll take Pence in their any day. Pence, in their mind, is a conservative Republican. They think they’ll roll over him inside of two weeks.

Pence is much more acceptable to them than Trump. Pence, at least, is a governor. You can make a greater claim that he comes from their side of the tracks — and as a good conservative, he’s very happy to lose. In their minds. I’m not saying that describes Pence. That’s how they see him. They think they can roll pence and send him packing inside of a year. They think they can embarrass and humiliate him. Do you think they not gonna started on Pence? What’s Pence gonna be guilty of? He accepted Trump’s vice presidency!

The next thing they’re gonna go after: What did Pence know and when did he know it? You think they’re gonna just sit there and let Pence become president and do nothing about it? Unless they get polling data say that Pence will get them the House back and Pence will get them the White House in 2020, then they’ll leave him there. But believe me, this stuff with Trump is purely personal. The things are factors, like what he’s doing agenda-wise, but that’s the icing-on-the-cake stuff. Just the fact that Trump is alive and did what he did. 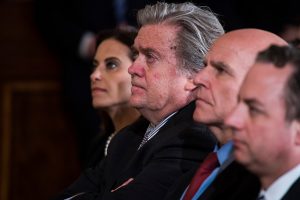 This is why I don’t understand how Trump doesn’t know this, but apparently he doesn’t. Apparently, Trump really thought firing Comey would quiet the Democrats down, and he really, if The Politico is right... And by the way, I think this is true to a certain degree. I don’t know how true. But I believe there’s an element of truth to it. When Politico reports that Trump is surprised that this Russia thing is still going on? If that’s true, then Trump doesn’t have anybody around him who can honestly tell him what he’s up against.

And it’s more than just, “Well, he’s not ideological so he don’t know how liberals operate.” It’s more than that. To be sitting there in the midst of this every day and think that, at some point, it’s gonna go away and that they’re gonna accept him? Never! That’s never gonna happen. Trump’s not supposed to get Supreme Court nominees, and he did! You want to know how that ticks them off, and the fact that Merrick Garland didn’t get it when Obama nominated him? They’re still fuming! These people are so consumed with hate.

That’s what you’re seeing on TV every day, folks. You are seeing raw, unchanneled, unboundaried hate on the part of the media and the Democrats. Mike Lee… You know who Mike Lee is? Senator from Utah. Big conservative. You know what he’s just suggested? That Trump nominate Merrick Garland for director of the FBI. (laughing) Snerdley’s going bananas in there. He did. You know why? He thinks it would que… (interruption) That’s right. He thinks it would quiet the Democrats. If they got their Supreme Court nominee at the FBI, then we could get Merrick Garland in there.

And Merrick Garland’s got a score to settle with Trump. So we put Merrick Garland in there. Merrick Garland can continue in the Comey tradition of trying to nail Trump, and so that would quiet the Democrats. That’s the thing. (interruption) I know. The stupidity… Well, “stupidity.” The lack… Even now, the lack of desire to beat these people is unreal to me. If this kind of stuff were being done to me, I would want to squash these people.

I would just want to smother ’em. I would want to wipe them out. (interruption) Politically speaking. I don’t have any nuking. I don’t have any bombs. I’m not Kim Jong-un. I can’t bomb anybody. I’m not… I mean, wipe ’em out. Of course, politically. And they’re ripe for it. They’re losing elections. Now you got me, now you’re just getting me remembering why I’m so damn frustrated with all this.