RUSH: I’ve been alluding in the past couple weeks about one of the funniest things that’s happening out there, and you do have to laugh at it. It’s sad at the same time, but it’s also funny. Maxine Waters, who is… The elevator doesn’t go to the top floor. She’s an order of fries short of a Happy Meal. She’s just out there. (chuckling) Folks, I’m just trying to be as polite as I can here. And yet she has become… With Millennials on the left, she is the biggest star in the Democrat Party today. It defies explanation! I read an interview with her. 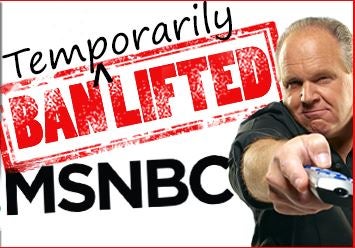 I think it was in Elle magazine, E-L-L-E. It was some women’s magazine. I wasn’t reading the magazine. The story was linked to a blog that I was reading that the blogger was also stunned and shocked. You should have seen the hero worship. The writer of the story was just the biggest glittering jewel of stupidity, and was singing the praises of “Auntie Maxine” as the greatest… She’s kind of like Chauncey Gardiner. You know Peter Sellers in that movie? No matter what he said, everybody thought it was genius! It’s kind of this way with Maxine.

She was trying to use him as a means of refuting my claim that she was anti-capitalist. “My husband works in a car dealership. What do you mean, I don’t like capitalism? I love capitalism!” Sidney was just standing there, knowing he’s not gonna get a word in. (interruption) Oh, she knew who I was. She approached me, came up to me. She was feisty. She wasn’t mean, but she was combative. She was gonna give what-for. She was gonna tell me what-for.

You know, she used to have a partner in crime, Diane Watson, out of Los Angeles. They were the Batman and Robin of the uber-civil rights left back in the seventies and eighties. They were in the… I think they were in California Assembly together. Maybe it was just Diane Watson. But she ended up joining Maxine in Congress for awhile, and Tom Hayden loved them. I met Tom Hayden once. He came by the station I worked for in Sacramento. He was just waxing on about Maxine and Diane.

She gives away what their long-term plans are. Like she once told a collection of CEOs during a congressional hearing, “If you think we’re coming after your business, you’re right. We are. We don’t know how to run ’em. We’re gonna take ’em over!” You know, gavel! (banging) The chairman of the committee started gaveling her shut. “No, no, no! You’re not supposed to say that. You’re not supposed to tell ’em we’re gonna take their businesses away from ’em.” “Well, we are! That’s what we’re here for!”

This kind of stuff. “They don’t know what they’re doing with their businesses. They don’t care about people. They’re killing people. They don’t care about it. We’re gonna take ’em over. That’s the whole point of us being here.” Gavel! He tries to bring the proceedings to a screeching halt yet again. Cookie, I know we have one of those instances in our archives, and I think that very one. Maybe she can find it. Anyway, this is the bite that sets this all up. We’re gonna go back here to January 13.

Now, this, folks, is a nine-second bite, but it sets up what’s coming. Maxine is in Washington at a press conference after a closed-door briefing for all House members on the supposed Russian hacking in the election. So on January 13, there was a closed door meeting. (chuckles) There wasn’t any evidence then; there isn’t any evidence now. McCabe, by the way, testified today that the Russia investigation is highly significant. It’s very, very significant. Yeah, well, they don’t…

Unless they’ve got some evidence that the Russians worked with Trump to steal the election, what the hell are they gonna come up with here? It’s not even a criminal investigation. Anyway, here’s the bite. This is Maxine at the press conference. She had this… It’s a reporter, not named, and he starts the bite with a question. He wants to know if there’s anything that comes out of the briefing that she can share with the media. It’s number 26, and then we’ll go to two and three. All right. It’s sound bite 26. In three, two, one.

REPORTER: Can you tell us anything about the discussion in the briefing?

WATERS: No, it’s classified, and we can’t tell you anything. All I can tell you is the FBI director has no credibility.

RUSH: Ooh no! Oh, whoa, whoa, whoa! January 13, Maxine Waters coming out of a briefing — a closed-door briefing for all House members — and the conclusion she had was that the FBI director has no credibility. That would be James Comey! That’s the only thing she… So what did they hear in there? What must the members of the House have been told? The Democrat caucus, what must they have been told about this investigation? Whatever it was, it made her mad as hell at Comey, okay?

January 13th (paraphrased), “Well, there’s nothing I can tell you. They’ll gavel me shut! But all I can tell you is the FBI director has no credibility.” We no go to late yesterday, PMSNBC Live, the host Peter Alexander speaking with Maxine Waters about Trump firing Comey. Question: “You obviously have been very critical of James Comey in the past. You said he had ‘no credibility.’ I assume you support the president’s decision to fire the FBI director?”

ALEXANDER: I understand in the past he was praising him. But if you said FBI director James Comey had no credibility —

ALEXANDER: — wouldn’t you support the fact that the president —

ALEXANDER: — made the decision to get rid of him?

WATERS: No. No, not necessarily, and let me tell you why.

WATERS: You have an investigation going on where the president is implicated, and this is a serious investigation. I’ve been trying to get people to focus on this connection with the Kremlin and with Putin. I believe that they should have to connect the dots and get the facts, because I think it will lead to the impeachment of this president.

RUSH: Which she’s been talking about since January. She’s been talking about impeaching Trump since January. So it’s “a serious investigation. The president is implicated,” she said. “The president’s implicated,” serious investigation. She’s been “trying to get people to focus connection with the Kremlin and with Putin.” So Alexander then says, “Okay, now, to be clear, you believe it would have been better to keep in place an FBI director who you said had ‘no credibility’ to oversee this investigation than to find somebody who you think would be a better choice?”

WATERS: No. But I believe the president thought that. Don’t forget, you’re talking about what some Democrat said, what I said. But don’t forget: He was the president. The president supported him. He had confidence in him. It was within his power and he said he wants to kick his —

ALEXANDER: But you said he had no credibility.

WATERS: I did! Absolutely!

ALEXANDER: It would seem to make sense that he should get rid of him.

WATERS: No! No, no, no! Under investigation. This president basically has interfered with an investigation where he may be implicated. That’s outrageous, and that’s why we’re having so much of a conversation about it today. Everybody is talking about it, because this is highly unusual. It does not meet the smell test.

RUSH: No, no. “It does not meet the smell test.” See, what he’s getting at is, you said the guy has no credibility back in January. No credibility! “It doesn’t matter, because the president is implicated. It’s a serious investigation, and Trump said he had confidence in him.” “Well, you didn’t. Don’t you think it’d be better to get rid of him?” “No. No, no. Let me tell you why. Under investigation, this president basically has interfered with an investigation where he may be…” Uh-oh! May be implicated? In the previous bite, he is implicated. Now it’s “may be implicated.” So the next bite, Alexander — frustrated here that he can’t get any common sense out of her — tries one more time. “So if Hillary Clinton had won the White House, would you have recommended she fire Comey?”

WATERS: Well, let me tell you something: If she had won the White House, I believe that — given what he did to her and what he tried to do — she should have fired him. Yes!

WATERS: No. (sputters) No, you’re not confused!

ALEXANDER: I am confused.

RUSH: Okay. So she eventually says that if Hillary had fired Comey, it would have been fine, because apparently Hillary would not have been implicated in an investigation. Except Hillary did rig an election, Maxine. Hillary and Debbie “Blabbermouth” Schultz rigged the election against Crazy Bernie — who I think Maxine supported, didn’t she? Not sure about that. Anyway, I wanted you to hear this because she’s the heroine. She’s the biggest star right now the Democrats have in terms of personality. (laughing) She’s at the MTV Awards!

RUSH: Here’s just one example of Maxine from our Grooveyard of Forgotten Sound Bites, from the archives. This goes back to August 31, 2011. It’s in Los Angeles. There’s a Congressional Black Caucasians town hall called the For the People Jobs Initiative. And there are a bunch of bankers that are in there, and Maxine is referring to ’em as “gangsta” bankers.

WATERS: It’s time for the bully pulpit of the White House to bring the gangstas in —

WATERS: — put them around the table and let them know that if they don’t come up with loan modifications and keep people in their homes that they’ve worked so hard for, we’re gonna tax them out of business.

RUSH: (laughing) There we go. (paraphrased) “We’re gonna tax gangsta banks out of business! If they don’t stop foreclosing on the peeps, we’re gonna tax ’em out of business!” And that’s just one example! There are countless examples of Maxine threatening CEOs of any number of industries and businesses with the very same destruction by the Democrat Party.

RUSH: Grab sound bite 31. We’ve got another Maxine Waters. (chuckles) This is 2002. This is in Washington, a House Financial Services Committee hearing. Remember WorldCom, the giant financial concern that was accused of cheating and doing…? (interruption) Terry McAuliffe had ties to WorldCom and so did this guy in Bel Air. Now, what’s his name? Oh, geez. I can’t think… (interruption) No, that was Global Crossing, Gary Winnick. This WorldCom, this was… I don’t know. Anyway, it was a great big company the Democrats went after, and Maxine here is on the Financial Services Committee, and she is… I don’t know if she’s talking to somebody or just making a speech here. But listen.

WATERS: The analyst, Mr. Jack Grubman from Salomon Barney Frank with close ties to WorldCom. And, by the way, he refers to close ties and conflict of interest at Synergy, is the one who recommended WorldCom.