Hillary News, Because We Must

RUSH: Other items here in the Stack… Unfortunately, at the top, Hillary Clinton news. Now, as we said earlier, Hillary Clinton has come up with another reason why she lost the presidency. She’s now blaming debate moderators — I’m not making this up — because they did not ask Trump any questions about job creation. Look, don’t ask me to explain this. The woman clearly is not there. The woman has been bamboozled by what happened to her. She’s a two-time, humiliated loser, and this time around, this was supposed to be the easiest presidential victory in the history of campaigns. 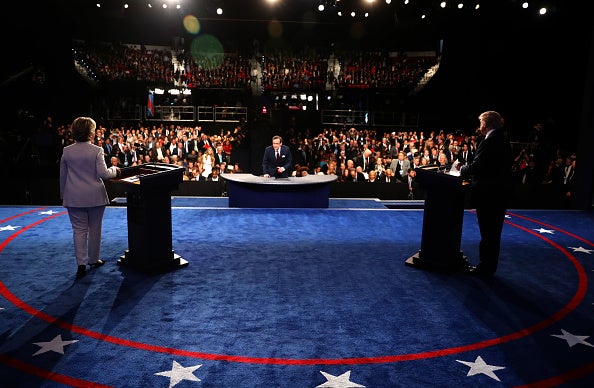 Because Trump was supposed to be so unelectable. Trump was the biggest buffoon that’s ever run. All Hillary had to do was show up and be on the ballot, and she would win by a landslide. And she ends up losing. A deep profound humiliation! And she lost with Obama campaigning for her multiple times a day, while asking people to vote for her to continue his legacy. His legacy was sent packing. He was sent packing. Hillary was sent packing.

The American people said at the ballot box, “We don’t want any more of this,” and they can’t even now come to grips with it. So the latest excuse is that Trump was not asked any questions in the debates about job creation. But he was. He was asked in two different debates about it. But so what? Even if he hadn’t been, was she asked about job creation and her answers were insufficient or what?

I mean, that’s how grasping for straws they are. “Hillary Clinton is starting a new political action committee and will resume giving paid speeches.” This is in Axios, a new website. It’s an offshoot of Politico. “Clinton’s PAC will work as a ‘quiet catalyst’ to help grassroots political organizations. She also plans to direct funds to congressional candidates in 2018. Allen’s sources say that the PAC is not a vehicle for a 2020 presidential bid.”

So essentially, what this really is, this new PAC, this is a new way for the Clintons to launder money again, now that the crime family foundation is on the skids. They just can’t help themselves. They live in the world of donors. They live in the world of asking people for money. That’s all she knows how to do. They don’t know how to earn it. Well, unless you consider giving speeches to donors for 250 grand earning it.

Dana Milbank, at the Washington Post, a columnist, a huge Hillary supporter, dyed-in-the-wool. He has a piece today explaining why Hillary lost. It’s based on Comey’s testimony yesterday at the Senate. Headline: “Now We Know: Bill Clinton Cost His Wife the Presidency.”

And here’s how his piece begins: “So now it can be told: Bill Clinton cost his wife the presidency. Almost three hours into a hearing of the Senate Judiciary Committee on Wednesday, FBI Director James Comey shed new light on his decision to go public about his agency’s investigations into Hillary Clinton’s emails.

“The specific reason he cited: Bill Clinton’s decision to board Attorney General Loretta Lynch’s plane in late June, when their planes were both on a tarmac in Phoenix. ‘The capper was — and I’m not picking on Attorney General Loretta Lynch, who I like very much — but her meeting with President Clinton on that airplane was the capper for me,’ Comey said. Comey decided to ‘step away’ and announce, without consulting the Justice Department, that Hillary Clinton shouldn’t be charged.”

Because he knew that Lynch was compromised. The minute she took the meeting with Clinton on the plane, he said, that was the capper. And he had to go out and do that July 5th press conference after he had seen that. He had to say she wasn’t going to be charged because he was losing control of the investigation, what, with that.

Milbank says, “In Comey’s telling, this public announcement in turn required Comey to speak up again in October, when more emails were found. ‘Having done that [the public announcement] and then having testified repeatedly under oath that we’re done,’ he said, ‘it would be a disastrous, catastrophic concealment’ not to go public on Oct. 28 with the newly discovered emails.

“It’s a tragic chain of events: If Bill Clinton hadn’t boarded that plane in June, Comey might not have spoken out in July, which means he wouldn’t have felt compelled to speak up again in October, which means Hillary Clinton would have won the election in November.”

Because Hillary had started all of this. If Hillary Clinton hadn’t violated a law and set up this server and been throwing around classified data all over God’s creation, none of the rest of this would have happened.

Well, she let Clinton get on the plane because Clinton appointed her US attorney for the eastern district of New York, which is in Brooklyn. It’s in Long Island. I mean, these people are as thick as thieves and they were compromised. But that’s the answer. And as far as Comey is concerned — somebody sent me a note today that they actually spent a lot of time watching Comey’s testimony yesterday. And they felt bad for Comey’s dilemma. He really had a dilemma. And he shouldn’t have, he may have, but he shouldn’t have had one.

And we thought at the time that he was actually trying to inform the American voter of just how egregious Hillary had behaved because there weren’t going to be charges for political reasons. But he should never have done that July 5th press conference. But he says now he had to because Loretta Lynch took the meeting with Clinton. So he had to do it. And he closed the investigation. He said, “There aren’t going to be charges. We can’t find any intent,” which is bogus. The statute doesn’t require intent.

RUSH: Lexington, Illinois, Eddie, great to have you on the EIB Network. Hello.

CALLER: Rush, I have a comment about Comey, and then I want to ask you a very specific question.

CALLER: Comey let Hillary off the hook two days before the election, and yet we now know that he had some very new information. He knew that classified information was relayed from Hillary and Huma to Anthony Weiner, a very compromised and high-risk person for being blackmailed. Comey also knew the Russians were hacking everything. So when he said, “I haven’t found anything new or anything that would change anything,” he left some information out there that Hillary is very fortunate that was left out. Because it would have been a landslide.

And here’s my question for you: Comey apparently believes Hillary committed a crime, but the attorney general wasn’t going to prosecute her. Right now, Comey is the head of the FBI and Jeff Sessions is the head of the Justice Department. Is that not…? What is he doing? Is that okay? It’s okay if you commit a crime. If you lose an election, then it doesn’t matter? If he’s a principled person, the crime that he was disappointed in Loretta Lynch for not prosecuting, that problem no longer exists. I mean, he’s just a deep stater like everybody else, if he doesn’t do the right thing.

RUSH: Well, I’m going to have to check my memory on this. The first part before you got to the question. I know that it looks like Comey exonerated her twice, but the Clintons don’t think that and the Democrats don’t think that. The Democrats look at that July 5th press conference as a dual-edged sword. The first half of it, Comey listed the things that she did wrong and acknowledged that many of them are criminal. He didn’t charge her, which is the second half of that presser, because he couldn’t find intent.

So back then, Comey was a hero.

Back then, Comey was a great guy!

He deserved to be FBI director for life. “James Comey is the greatest guy to have ever been because he said Hillary was innocent.” Then the October 28th letter to Congress. Because they had found stuff with Huma and her computer and now Weiner’s computer. And Comey says he’s had to reopen the investigation, and this is looking bad. And then a number of days went by before Comey said, “Sorry. Nothing to see here. Nothing’s changed. We couldn’t find intent.” The Clinton camp thinks that nobody heard the exoneration, that all they heard was Comey reopen because of something very suspicious-looking, and that’s why the Clintons think that that 28th of October letter did her in.

Look, these people are so — I don’t know how to describe them. But none of this is Comey’s fault, no matter how badly he botched it or how well he played it, however you want to look at it. This is all on Hillary. You know, she even took responsibility for it for a couple of seconds and then starts blaming everybody.

Now, I know your question. They said back when Loretta Lynch was attorney general, they’re not going to charge because she got on a plane with Clinton. There was no intent. But now it’s a whole different regime in there. You got Sessions in there, not Lynch. And you’ve got Trump in there, and not Clinton.

So doesn’t that change things? Couldn’t Comey go after her now? It ought to be abundantly clear, Comey doesn’t want to go after her, folks. Comey does not want to bring charges. Now, correct me if I’m wrong about this, didn’t Trump say during the campaign that he thought that she should be investigated, should be in jail, and that’s why her supporters were chanting, “Lock her up.” But didn’t he say shortly around inauguration time or sometime after he won the election, that he didn’t want to go forward and prosecute her?

So I don’t know that Sessions and the DOJ have any intention of taking advantage of the fact they run the show now and could make a move on investigating her. Sessions has recused himself from a lot. I don’t know if he’s recused himself from this, by virtue of recusing himself from the Russian investigation or not. But I don’t think there is the political will to revise and change the — especially after Comey’s cleared her. I mean, Comey said, “There’s no intent. We can’t charge her. No reasonable prosecutor would.” And if he doesn’t find any new evidence, then why would he come up and say, “By the way, you know what, we’ve got a new president, new attorney general, you know what, I did see intent. We’re going to go after her”? I don’t see that happening.