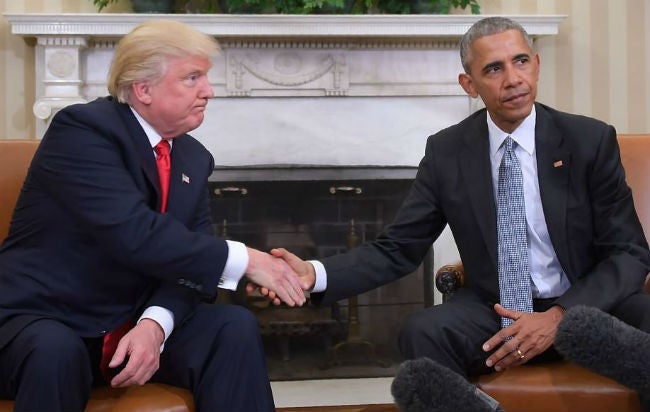 Get this, the Washington Post. If I were the Democrats — this is why this budget deal is even more painful for me than it was a couple of days ago. The Washington Post reports on focus groups that the Democrats have conducted to try to figure out why they lost the election. Now, one of the stories we had yesterday, the Democrats think that they failed to turn out their base for Hillary, or that Hillary failed to turn out the Obama base voter. A lot of people voted for Obama in ’08 and in 2012 that did not vote for Hillary in 2016.

So in the story yesterday, these people are wringing their hands about why, oh, my God, why? I mean, what did Hillary do wrong? And the answer is clear. There were a lot of people that voted for Obama in 2008 and 2012 for one reason, and it had nothing to do with anybody’s policy. It had to do with people in this country distressed over all of these allegations that they are racist, that the country is racist, and they’re tired of it. And they firmly believed that if they voted for an African-American for the highest, most powerful office in the land, it would send the message that America isn’t racist and that individual people are not racists.

People desperately want to end this racial strife because they recognize that it’s a bogus charge, because the charge is meant to identify and tag the country as a remaining slave state and a racist state, and people are fed up with it. And they thought, man, if I vote for the African-American guy, how can anybody call us a racist then? Well, when Obama’s no longer on the ballot, guess what happens? Issues start to matter and the actual candidates start to matter, and that’s where the Hillary campaign was doomed, because the same number of people who desperately wanted to end racism didn’t think electing her would solve any problems along the gender divide that we’ve got.

But the Democrats are never gonna admit this. They will never admit that Obama voters voted for him for surface reasons. They want this image that everybody voted for Obama was committed to Obama, deeply connected the Obama, personally, issue-wise. And that wasn’t the case. Now the Washington Post reports on these Democrat focus groups. And this survey reveals the Democrats have got more trouble than just losing the people that voted for Obama because he was black so they could end racism.

A large percentage of the Obama voters who abandoned Hillary and voted for Trump — are you ready for this? — Democrat focus groups, a big number said they abandoned the Democrats for Trump because Democrat economic policies favor the wealthy. Twice as many people as said that about Trump. In other words, double the number of people who thought Trump was for the rich thought Democrats were. This has got to be one of the biggest shocks. The Democrats are the party of the little guy. The Democrats are the party of the downtrodden, the homeless, the hungry, the thirsty, the starving. And now a focus group has shown them that they have become the party of the rich?

In one group, Obama-Trump voters were asked what Democrats stand for today. Answers were the 1%, the status quo, they’re for the party, themselves and the party. One woman was asked whether the Democrat Party is for people like her. She said, “No.” You realize how many Democrats are upset that Obama’s out there getting $60 million for a book and $400,000 for a speech? You’d be surprised. There are Democrats literally outraged and think he’s now engaging in phoniness or maybe he was phony and now we’re getting the real Obama.

He’s making deals with Wall Street. He’s accepting books, book money from New York publishers and speech money from Wall Street banks. And Obama made all of his voters think he hated them right along with Democrat voters. Now he’s cozying up to ’em. He’s buying houses where these people live. He’s partying with ’em. He’s going to deserted islands with ’em. And now he’s accepting $400,000 to do speeches for them. You’re not seeing a whole lot of this, although the New York Times is actually writing about this, in the sense that Obama is flaunting all of this, and it’s a major shock for Obama voters and Democrats in general.