RUSH: Mick Mulvaney is the budget director for Donald Trump. They just had… In fact, he’s still doing it. He’s doing the White House briefing today on the budget. Mulvaney is a great guy. Mulvaney is a former member of Congress, and he’s a Freedom Caucus type. He’s a Tea Partier. He’s a dyed-in-the-wool one of us, folks — a straight down the middle, top to bottom, solid conservative. He’s the budget guy. I’ve met him, I talked to him about their original health care plan and what their objectives for it were and why there were phase 1, 2, and 3.

So, anyway, he’s doing the briefing today to explain the budget as the vice president did in his guest appearance on this program a little less than two hours ago. And one of the things that Mulvaney said is that, yeah, the Democrats have been trying to claim victory, but that’s nuts because this was a bipartisan budget deal. And Mulvaney said the American people are the winners here. The Democrats didn’t win. There’s no partisan victory in this budget, he says. He pointed out the $21 billion additional spending on the military for less than $5 billion in nonmilitary spending parity ended.

How many of you even knew that that existed? Well, you’re a wonk, Snerdley. Snerdley’s hand shot up. This is a holdover from the sequester days. And basically if the military got an additional dollar in spending, then some social program over here had to get the same dollar. The deal that was struck essentially said, “Look, if you warmongers,” the Democrats were talking, “You warmongers, if you want more money for defense then we’re gonna get more money for our social programs.”

And that was part of the deal, it was called parity. And what the Trump people are saying is we blew parity out of the water. We got $21 billion in new defense spending for the army of freedom, the army of democracy, arsenal of democracy, and we only had to spend $5 billion nonmilitary spending, so we’ve defeated parity. He said that this the largest allocation for border security in 10 years. Even though there’s no wall, there’s additional. And the Democrats — this is true — the Democrats did agree to more spending on border security. It’s not being touted, but it’s in there.

Health issues for miners in Appalachia which the Democrats are taking credit for. Mulvaney said it was Trump’s demand that it was in there, Trump demanded that there be money spent on health care and issues for miners, which is the commitment and the follow-through on a promise. Here is what Mulvaney said in the press conference that the Democrats did not get in this budget deal. They got no Obamacare bailout money. They failed to do this for their base. They got no new money for Puerto Rico. They got no renewable energy subsidies for wind and solar. No new money in that.

Mulvaney said it was the Democrats that were angling for the shutdown. I have no doubt about it. The Democrats and their media masters organized the government shutdown because they know the Republicans are gonna get blamed for it. He said that one of the objectives that Schumer and Pelosi had in this whole budget fight was to make it look like Trump cannot govern. They didn’t get that. They didn’t get that is evidenced by there’s a budget deal. There’s a budget deal not just for an additional week, but all the way through September. Mulvaney says that the takeovers here is that we can govern, that we can run things, than we can make things run on time and get things done. The Democrats wanted the shutdown to demonstrate we can’t and we blew ’em out of the water.

Mulvaney said without hesitation Trump out-negotiated them at every turn. He reemphasized that this is a win-win for Americans and he then showed some photos of where they can redo the wall, millions in the budget to do some fixing and replacing on the wall now. No money for new walls and expenses, but there is millions of dollars to fix and replace what passes for a fence or a wall now, and Mulvaney displayed photos of where they’re gonna build the wall.

He said that Trump is frustrated because Trump negotiated in good faith with the Democrats, and then they went out and trashed him after the deal had been made. He said Trump is frustrated. He negotiated in good faith with Chuck Schumer and these gangs and that the Democrats, when it was over, went out and trashed him.

The bite of the apple that they got in this budget is just a way to move things along faster with the Trump agenda. Mulvaney said, look, this isn’t our budget. This is the previous Congress’ budget. Because it was a CR, it was gonna expire. We can’t redo a whole budget. We have to come up with an extension. Trump out-negotiated his people and is the first president to ever get some of his agenda items in a budget that was not his. A world record. Only dictators have done this. 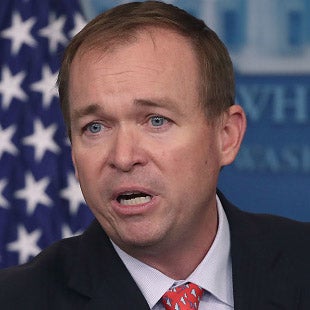 Well, you get the point. The reason for this is that when a new president is inaugurated, the budget for the remaining year, nine months, the first nine months of his term is done. It’s been negotiated the previous September and October. Well, that didn’t happen last year. Series of continuing resolutions, and this one we were under was expiring so they had to extend it until September. That gave Trump an opportunity to begin the implementation of his agenda in this budget.

It’s the first time that a new president in his first year has ever been able to impact the nation’s budget that was written before he came to office. That’s a big deal. But the point of it is that that fact gives them a foot in the budget door that’s going to further their ability to implement Trump’s agenda in continuing years. And he said that none of this would have happened if Obama had signed a continuing resolution last October. They wouldn’t have had a chance for any of this input if Obama had signed it. But he didn’t because the Democrats have not wanted to operate with a full-year budget because they’ve been able to increase spending multiple times a year this way.

So, at the end of the day, Mulvaney said they’re very pleased to have been able to get some of this moving way in advance of what they thought they would. They thought their first budget and the opportunity to implement any of their agenda would not happen until September, and they think they’ve got a great head start on this. So that’s a summation of the briefing with Mulvaney today. That’s the White House take.

RUSH: Lindsey Graham, by the way, “Democrats cleaned our clock” on the spending bill. This is a CNN appearance. And there’s an immigration group that has rescinded its endorsement of Trump for failure to follow through on campaign promises and agenda items. So there are some waves out there that they’re gonna have to deal with in the White House.

Here’s Denise in Chino Hills, California. Welcome. Great to have you.

CALLER: So I have a way for Trump to fund the border wall, and that is for him to go find a couple pallets of cash like Obama did with the Iran deal and send it in the middle of night to the contractors who win the job. 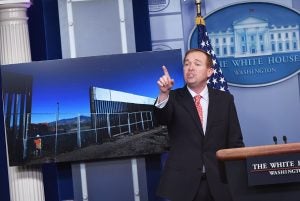 RUSH: Well, Obama, those were unmarked bills that Obama got somewhere, and you’re right, he put ’em on pallets and flew them over there to Iran in secret flights to pay a ransom for the return of American hostages, I think, something like that, right?

CALLER: Yes. They always seem to be able to find money for what they want to do.

RUSH: Right. Well, that’s a very clever way of getting some snark in here about Obama, which we always appreciate.

RUSH: Mulvaney, by the way, folks, he showed pictures here of the wall they’re already building. And you can see through the wall. It’s not a solid wall, the pictures he showed. And he said the reason is so that our guys can see what the bad guys are doing on the other side of the wall. But he maintained it was a win-win, that nobody got smoked in this deal and everything’s good, everything’s okay, calm down.

RUSH:  Now the Drive-Bys are all ticked off.  They’re mad that after Mulvaney finished the briefing on the budget, that everybody left.  Spicer left, didn’t do a briefing, didn’t answer questions about Trump’s call to Putin, didn’t answer questions of what Trump thinks of Colbert, which I’m not even gonna mention.  I refuse to give that any attention whatsoever.  It’s just despicable, sick stuff.