The Wall: It’s Time to Shut Down the Democrats

CALLER: It’s about 60 miles north of Tampa and about 20 miles from the Crystal River, Citrus County.

RUSH: I know right where it is. Thank you very much for calling.

CALLER: I must say, you are a breath of fresh air in truth and a vast array of knowledge. I believe that people shouldn’t really worry about Trump with the wall right now because I think he’s just using that as a bargaining chip, a ploy. Whereas he throws it into the budget, if they say okay, “Hey, great.” If they say “no,” he didn’t lose anything because he has other ways of getting it. But this way if they ever come back and say, “Hey, look, we want this,” he’ll say, “Hey, wait a minute. I gave up this. You want that? We’re gonna go back, and I’m gonna have the wall.”

RUSH: Well, you know, I understand that. There are gonna be all kinds of people — Trump supporters — who will try to explain this in the most satisfactory way to them, such as you’re doing. “Hey, hey, hey, you know what? He’s up against a lot there. This is just a chip thrown down. This is by no means the end of this process. Trump says we’re gonna get the wall? We’re gonna get the wall. I have total trust and faith.”

RUSH: Now, back to Trump and the wall here. I think there is validity to John’s point here that this could be a chip laid down for use later on. The one thing I think it’s important to remember in all of this is exactly — and none of this has changed.

We have to remember how the entire Washington establishment is arrayed against Donald Trump, and this includes members of his own party. Not all of them, of course. But there are many in the Republican Party who do not… Let’s put it this way. There are a lot of people waiting for President Pence. There are a lot of people who do not want Trump to succeed. I’ve been through the reasons, and it doesn’t matter that he’s right or wrong on his ideas. It doesn’t matter. Trump could have the best tax reform plan that there’s ever been.

Trump could have the best immigration reform. In fact, I’ll go so far as to say this. The more ingenious, the more effective, the more brilliant Trump’s ideas are, the greater the opposition to them he’s gonna face, for all of the previously stated reasons. The Washington establishment is a closed club. It’s made up of robotically similar people. They have structured their existence, terms of marketing and branding, as to be so special and so unique that only they are qualified to be in the establishment. 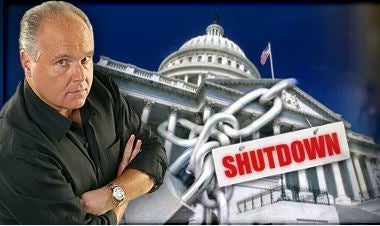 Only they are qualified to have such power in our country. Only they have any business being in charge of all of these matters and affairs of state. Well, by virtue of that, an outsider is not welcome. An outsider must be sent packing. An outsider cannot succeed. An outsider… Particularly an outsider like this one — a loud, bombastic, braggadocios, and in some might say a put-down artist. “We can’t allow some buffoon like this to come in here and succeed, because what will that say?

But when it comes to comprehensive immigration reform, you’ve got to remember where the Washington establishment is, and the Washington establishment is right where people who pay for it are. The lobbyists and the donors. And they do not want a wall, and they do not want an interruption in the ongoing flow of illegal immigration. The Chamber of Commerce, various other Republican donors, liberal Democrats want this influx of people ’cause they need the voter registration that they portend. There are a whole bunch of reasons.

But the last thing they want is for some (in their view) unskilled, untrained, unprofessional, reckless ne’er-do-well bringing in this bunch of people he’s got, like this ruffian Bannon and some of these young whippersnappers that don’t know what they’re doing? “Good God,” the establishment’s saying, “we can’t allow this to succeed! What’s it gonna say about us?” My point is, you always have to keep in mind what Trump is up against. And he knows it. I’m not trying to make anybody people sorry for him. Never forget what he’s up against. And he knows it.

Part of cleaning out the swamp is getting rid of this tactic (one of many): government shutdown. And what I don’t like about this is that we are delaying anything — wall, whatever it is — supposedly because of fear that the Democrats will shut down the government and we will get blamed for it. If they’re gonna shut it down, let’s find a way to blame ’em for it! Let’s stop acting scared and fraidy cat of this stuff. I’m just worn out with that. (sigh) When it comes to the wall, you know, I’ve never been sure he’s actually gonna build one. I’ve actually couple times during this program I said I think the wall is symbolic.

I had all kinds of Trumpists emailing me, telling me I didn’t know what I was talking about, that I was wrong. “He’s gonna build the wall! He’s a construction expert. He’s gonna build it. It’s gonna be prettier, it’s gonna be cheaper, it’s gonna best wall that’s ever been. And it doesn’t help us for you out there talking about there isn’t gonna be a wall.” Well, I’ve never been convinced there was gonna be a wall. If there is, fine! I’ll all excited for it. Bring it on. Bring the wall on. Make it a tourist attraction. I have no doubt that Trump wants to get it done.

I have no doubt that he will at some point. You’ve gotta keep in mind what Trump is up against here. I’ll tell you this. This is a new little bit of information that I have become aware of, and that is that there are many in the Senate and many in the House (both parties) who are privately laughing themselves silly at the prospect that Trump’s gonna get his wall. “There’s not gonna be a wall,” they’re saying. They’re laughing.

They’re just having the best time watching Trump talk about this, and they know there’s gonna be never be a wall because they’re never gonna vote for it. They don’t want a wall. They don’t want such a visible limitation on illegal immigration. And they’re just having the greatest time watching all this, chuckling and laughing. There’s never gonna be a wall, and they’re just enjoying Trump flail and talk about it and promise it. And they’re openly telling each other, “It’s a pipe dream. We’re never votin’ for that!”

That could be what’s really going on here. There’s a lot going on. The point is the opposition to Trump is just as pointed, intense, and severe as it’s ever been. And the closer he gets to actually accomplishing things, folks, the greater the resistance will become. They can’t afford for this guy to end up running rings around these professionals, these elites. Cannot have that! The saving grace is that he knows what he’s up against.