The Art of the Deal: Classic Trump Negotiation Plays Out on NAFTA

RUSH: Let’s move on to NAFTA. This is classic. This is literally classic, and it furthers my theory that Washington establishment types have no idea how to assess, how to judge, how to analyze, how to explain Donald Trump. Even though it’s right in front of their face. Even though if they wanted to they could go read his book, The Art of the Deal. If they wanted to listen to what Trump tells them about negotiation and how to go about it, they could learn. But they don’t because, I guess, arrogance. “We know best.” “We’re the elites.” “We know how it’s done.”

You see, in Washington, in the elite areas of government and worldwide government — organizations like the U.N., the U.S. Congress, just the Washington establishment and similar organizations in other countries — negotiation is an entirely different thing, apparently, than the way it happens in, say, Trump’s world in the area of construction and real estate. They call negotiation “statecraft.” And statecraft is something only they can do. It requires a lot of training and a lot of experience and a really whole lot of intelligence, and it involves a lot of diplomacy.

Statecraft diplomacy. And you’ve got to be very, very careful of just exactly how you say what you say, and you never, ever give ultimatums. You don’t ever do it! You don’t offend. You don’t ever say what you really mean. You don’t ever even hint at what you’re really going to do. As such, like the Middle East peace negotiations, nothing ever gets done, because the process becomes the actual story. The process, not a result, becomes what everybody seeks expertise in. But that’s not Trump’s world.

Trump doesn’t care about process except to the extent that it helps him accomplish what he wants to accomplish. Okay, so what do we know? We go back to the campaign. We know that Trump has said over and over again that NAFTA is a rotten deal for the United States. And he has said that he’s gonna do everything he can to either fix it or get us out of it. And he said this every day, day in and day out. Don’t know how many times he said it during the campaign. It was as often as he said he was gonna build a wall. It was as often as he said anything.

It was one of his top 10 things: NAFTA, trade deals rotten for the United States. “Dumb leaders in America signed this thing and negotiated it, and this is why we’re taking it on the chin, and I’m gonna fix it.” Well, there hasn’t been much done on NAFTA up to now. But we’re coming up on this magical deadline of the first hundred days, which is Saturday. So there is a White House push to get a lot of things on the table and make it look like there’s action on these things, so that Trump can say that the first hundred days have been unlike what media’s saying they are. 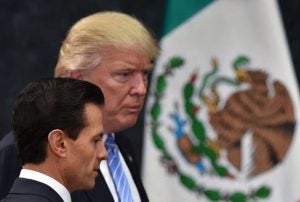 “They were jam packed with action! We’re moving forward. We’re showing a lot of progress and we’re gonna get a lot of things done. It’s the best hundred days of any president’s hundred days. It’s the greatest hundred days. Nobody’s ever had a better hundred days than I’ve had,” says Trump, and this NAFTA bit is just one of the elements. So what did he do? He announced that he’s just gonna pull out of it. “To heck with this! I can’t get any action on it. I can’t get any sympathetic agreement with me on this. We’re just gonna pull out.” Washington had a cow. “Oh, no! No!

“That’s not how… (stammering) What an idiot this guy is! We knew it was a mistake. Oh! This guy is just a bull in a china shop. Oh, my God, this guy is embarrassing. You don’t just… You can’t pull out of it. Congress has to be involved! He can’t… You just can’t…” Meanwhile, Trump is unfazed. The next thing we know Trump is saying that he got phone calls from the leaders of Mexico and Canada saying, “No, no, no, no! Don’t — don’t — don’t… We would much rather come talk to you about it. We would much rather you stay in. We need you in NAFTA. We need the United States. Please don’t pull out! Please don’t pull out!”

Trump says (paraphrased), “I just got phone calls from the president of Mexico. I have a great relationship with Mexico. The Mexicans love me, the Mexican president loves me. We have the greatest relationship with Mexico we’ve ever had. I just got a phone call from the prime minster of Canada, same thing. The prime minister of Canada loves me, we love him, greatest relationship we’ve ever had with Canada and they’re begging me to sit down and talk about NAFTA, and I have told them that I’d be happy to. If we can come to an agreement — if we can fix this so it’s no longer so unfair to America — I’ll be happy to sit down and talk to ’em.”

And it came up again, he had a little gaggle with the media in there with the president of Argentina, who was in the White House. I think this guy was the first to call and congratulate Trump on election night too. So, anyway, Trump is asked about NAFTA, and he goes through this whole story. Now, Washington believes that we have narrowly averted a disaster, that the inexperienced, know-nothing, ribald, bodacious Donald Trump nearly destroyed one of the firm trade deals we’ve got by simply speaking up and shouting and ripping it apart and claiming we’re gonna pull off it, causing a worldwide panic.

When in fact, the exact opposite is what has happened. These people simply… You wouldn’t have practitioners of statecraft and diplomacy behave this way. In fact, most official Washington wouldn’t even care to tackle NAFTA again to fix it. “It’s a done deal. Been there; done that. It’s over there. We don’t think about it anymore.” With Trump, it’s a major aspect of his campaign, he believes that it’s a bad deal, that we’re getting shafted and we’re getting screwed.

He’s said from the get-go he’s gonna fix that or we’re gonna get out of it, and the people who believe him are the prime minister of Canada and the president of Mexico. I mean, I think this is classic. Whereas they think Trump is dangerously uninformed, dangerously unaware, dangerously bold — doesn’t have the discipline to engage in the proper kinds of statecraft and diplomacy — the truth is that Trump has just begun the process of having this whole thing fixed and ending up in the favor of the United States which is what he said he was gonna do all the time.

You’ve gotta read Art of the Deal if you care about this (these people in Washington should), and one of the fundamental integral parts of a negotiation is that you must be fearless and you must be able to walk away from it — without any doubt, without any guilt. And you must be able to express your willingness to walk away. You don’t need it if it’s no good for you. It’s right out there for anybody to read. They refuse to familiarize themselves with it.

RUSH: Look at this headline in the New York Post: “Canada, Mexico Persuaded Trump Not to Withdraw from NAFTA.” See how it works? Trump was off the reservation. Trump had gone loony! Trump had lost his marbles. But thankfully, Canada and Mexico, they called Trump and they said, “Hey, man, you gotta come back! Hey, man, you can’t just ditch NAFTA like this,” and Trump agreed. So kudos to Canada and Mexico. That’s the way the headline and story is written in the New York Post because they don’t… (chuckling) It’s just the exact opposite of what happened. 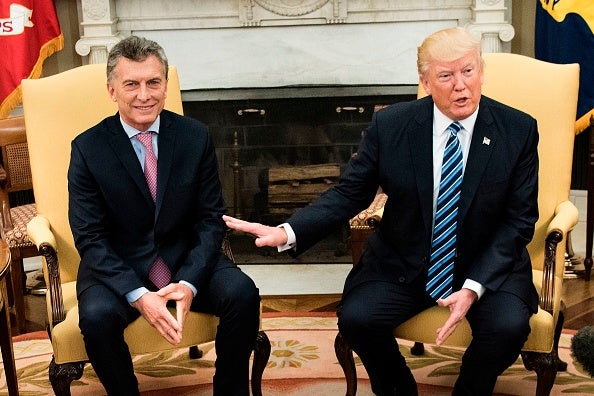 Here’s Trump himself in Washington in Oval Office. A reporter said, “Mr. President, can you tell us how you came about the decision to renegotiate NAFTA?”

THE PRESIDENT: Well, I was going to terminate NAFTA as of two or three days from now. The president of Mexico — who I have a very, very good relationship — called me. And also the prime minister of Canada — who I have a very good relationship, and I like both of these gentlemen very much. They called me, and they said, “Rather than terminating NAFTA, could you please renegotiate?” I like them very much; I respect their countries very much. The relationship is very special, and I said, “I will hold on the terminations. Let’s see if we can make it a fair deal.” Because NAFTA’s been a horrible deal for the United States. It’s been very good for Canada; it’s been very good for Mexico. But it’s been horrible for the United States.