How to Bring Apple’s Billions Home

RUSH: The Trump tax reform proposal also eliminates the death tax, and this did not announce it, but Mnuchin — the Treasury secretary — is said to be for a very, very, very competitive rate on repatriation. I’ll give you an example. You know, Apple Computers, Apple, Incorporated, is what they are now, a big social justice company that makes stuff. They have in the bank 240, 250 (I forget the number, say 250, round it up) billion dollars that’s just sitting there. That’s the total sum of their profit for year after year after year after year, and it grows by 40 or $50 billion a quarter. 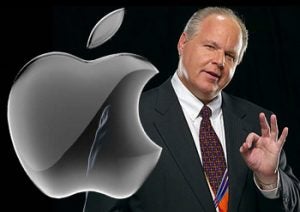 Most of that, 80% of that is held overseas, ’cause Apple is a worldwide social justice and social warrior company. And they do not bring 80% of that $250 billion back to America because the federal corporate tax rate’s 35%. So the social justice warriors at Apple who normally you would think would want to pay a 90% tax rate, as good Social Justice Warriors, do not want to pay such a high, exorbitant rate as 35%. So they keep that money overseas where much of it has been earned.

Repatriation is the bringing that money back home and having it circulating in the American economy. There is a one-time repatriation tax rate being proposed. They haven’t said what the rate is. But, for example, if they make it the capital gains rate — say 15 or 20%, as opposed to 35% — the theory is that Apple and other social justice warrior companies will bring money they’re holding overseas back home to the U.S., if they have to pay a much less prohibitive tax rate on it. It makes perfect sense. I mean, economically?

When you are beholden to shareholders and board of directors, why would you willingly pay a 35% tax rate on $250 billion when you don’t have to? It’s working for you just fine, you know, parked in Ireland and Taiwan and China and Strasbourg, wherever it is. Why bring it home, unless they make an incentive? And the Trump people are talking about just such an incentive. So that press conference with Q&A for reporters about specifics is still going on. We’ll feed you information as we get it.