RUSH: We talked about this yesterday, we mentioned it yesterday, this story about Trump saying that a giant armada was on its way to the Korean peninsula, and it wasn’t, and the Drive-Bys and the Democrats are just going bonkers. They think, “Oh, my God, this Trump guy is really, really dangerous! He doesn’t even know where his own Navy is. He’s out there saying the Navy’s headed for the North Koreans, and it’s not? My God, this is horrible!” We’ve got Begala, The Forehead, on CNN saying, “Gee, I really hope the guy succeeds, but this is unacceptable. We cannot have somebody who is this ignorant and doesn’t know what’s going on.” 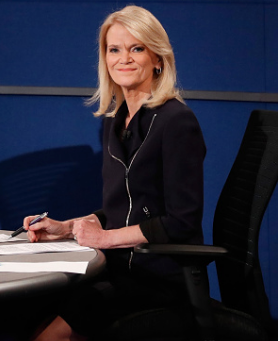 As I discussed yesterday, I don’t think that this is ignorant. I just think these people don’t understand Trump. And I’m gonna repeat the story that I mentioned yesterday. During one of the presidential debates, it was one that was hosted by Martha Raddatz at ABC News, and Martha Raddatz fashions herself as a foreign policy expert because she’s — I don’t know — the Pentagon correspondent, state department correspondent. I don’t know what. She’s an “expert.” And, by the way, the media and Democrats in government, they’re interchangeable.

It’s the same thing. I mean, it’s not as though Martha Raddatz is outside. She’s inside. She’s an insider with these people that she covers. So Trump, during the debate, is really ripping into Obama and Hillary for telegraphing when they would do things, like when they would attack ISIS. If they were gonna mount any kind of an invasion or military attack somewhere, they would give advance notice of it. Trump said, “This is stupid. This is an example of the dumb leadership we’ve got. There’s no way anybody ought to announce to the enemy when we’re coming.

“I will never do it. I will never tell you. I’m not gonna tell you when we’re gonna attack. I’m not gonna tell you when we’re not gonna attack.” Martha Raddatz practically lost it because she showed up already hating Trump and already not believing she had to even treat Trump with respect. She can’t believe he’s even got a chance of being elected president or he’s the nominee. She can’t believe any of this, and she literally loses it. And she starts telling him (impression), “What about psychological warfare? Do you know nothing?

“Do you not…? It could be psychological warfare, psychological ops? It could well be that we’re lying to them when we tell them we’re coming!” And Trump, unfazed, stayed on point and it’s the stupidest thing in the world and he would never do it and he would never tell her or anybody else in the media. We’re dealing with a bunch of lunatics in North Korea led by the premier lunatic. So Trump goes on TV and says, “Our great armada…” (chuckling) Who uses that word anymore? “…is on its way steaming to the North Korean coast.”

This put everybody off kilter. It… It just discombobulated everybody. The Norks didn’t know what was going on. And the end result of this is that it’s on the way now and it is going to get close. It wasn’t when Trump said it was. But I think that it’s entirely possible that it was a great feint — f-e-i-n-t, something to keep these people off guard. I mean, they’re madmen. You don’t deal with them rationally. They respond to threats, as has been demonstrated. And if they begin to question what they are being told by…

This guy’s being told by his own advisers or whatever. I think it’s entirely different from the way any other president in our lifetimes has operated in matters like this, and I think that’s why the establishment goes so bonkers ’cause it’s just violating all the so-called civilized norms. You don’t lie about troop movements. You don’t tell people your armada is somewhere when it isn’t. And, therefore, Trump must be stupid and ignorant and think it’s there — or worse, they said, Trump ordered it, but the military people lied to Trump and told him they were gonna send the armada, but they really didn’t. 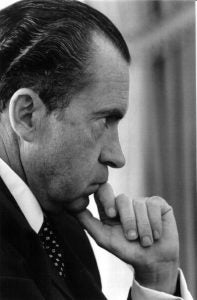 And that’s kind of the story they want to stick with, that the military people are scared to death Trump. “Oh, my God.” But he’s the president! So what are they gonna do? So Trump orders the armada to North Korea, but the military brass know it’s a dumb idea so they don’t order the armada, and tell Trump that it’s steaming on its way ’cause they think Trump doesn’t have the ability to go get a satellite view and find out how close it’s getting. Now, this has happened, by the way. Back during the Nixon administration, President Nixon one night had consumed (sigh) a bit too much adult beverage and ordered an attack on Damascus.

(That’s in Syria, for those of you in Rio Linda.)

The advisers to Nixon late that night had to tell him that the attack sequence was underway when, of course, it wasn’t. I have this on good authority, but that was a protective measure. I don’t know if that’s been written publicly about or not, but don’t doubt me on that. That did happen. But this is just part and parcel of media doing what they can to make as many people think that Donald Trump is mentally unstable, deranged, and not all there and poses a great threat. And it’s all oriented toward that day in the future where they desperately want to begin impeachment proceedings.