RUSH: I’ve got a story here, CNBC: “Millennial Women Are ‘Worried,’ ‘Ashamed’ of Out-Earning Boyfriends and Husbands.” (interruption) You don’t believe it? (interruption) You don’t buy this? (interruption) What, they’re never satisfied? Is that the…? (interruption) Oh. Well, let’s look at some of the details here. I’ve given you the headline. Here’s the lede of the story. Remember, we’re talking about Millennials, and that’s anybody, essentially… Just think of 18-to-34 right now and you’re pretty close to capturing the whole demographic, at least the adult portion of it.

“It’s no longer rare for women in relationships to out-earn their husbands or boyfriends…” Wait! Whoa, whoa, whoa, whoa, whoa. Wait a minute. But I thought it is. Didn’t Hillary Clinton…? Doesn’t every Democrat campaign, didn’t Obama go out of office whining and moaning that women still only earn 73¢ for every $1 a man earns? Isn’t that part of the Democrat Party platform? Isn’t that etched in stone in the Drive-By Media, that women are forever getting the shaft in every way you can imagine, including compensation?

So how does this story even happen? When did it happen that women started out-earning men? Why did nobody tell the media? Why did nobody tell the Democrats? But that’s what it says here. “It’s no longer rare for women in relationships to out-earn their husbands or boyfriends — in 2015, for example, 38% of American wives made more money than their husbands — but many women remain ambivalent about being breadwinners, reports Ashley C. Ford [a woman writing] for Refinery29.

“Ford, who is herself unbothered about making 70% more than her own male partner, tries to understand why so many of the Millennials she speaks to report feeling concerned, or even ashamed, about the repercussions of their success. The feedback they receive from the culture is clear: Men should be earning more so that they can provide for their families, and if they don’t, it’s symptomatic of a problem. These messages produce an ‘almost unavoidable emotional and psychological consequence,’ Ford writes. Women feel guilty. Men feel emasculated.”

Isn’t this what feminism wanted? Isn’t this exactly one of the many things feminists went on the warpath about starting in the late sixties and early seventies? So look at this. Women earn less? “It’s a problem! They only earn 73¢ for every $1!” We fixed it. Now women earn more. “It’s a problem! (sobs) Women are feeling guilty. Women are feeling ashamed.” So what do we do now to fix this? This dovetails. We’ve had a couple stories in the last two weeks about Millennial women wishing they could be housewives, wishing they didn’t have to work, preferring to be at home and be mothers and raise the kids.

They don’t want to have babies and then have to keep working. I think those stories are inseparable from this. If you are a Millennial woman and you want to stay home, your hubby had better be doin’ okay. If you don’t want to work, if you want to be Hannah Homemaker with the 2.8 kids and the picket fence, then lug head better be out there doing okay. Otherwise, you can’t afford to do that. Now, I don’t want to cause any unnecessary angst out there. But I want to remind everybody that I predicted this very thing years ago.

I predicted so much of what has come true regarding feminism and what the consequences of everybody kowtowing to these lunatic, left-wing women was going to end up being. And when I first… I’ll tell you when I noticed this. When I saw that college enrollment had shifted dramatically and more and more men were not going, and more and more women were, and then the curriculum at these universities began to switch in favor of the women. 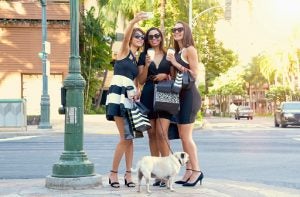 So we got all kinds of gender studies, race studies, women studies, and we got less and less of a curriculum that had any interest for men, and that’s when I began the whole phrase “chickification” of this and that. Chickification of the news, chickification of the media, chickification of the academy, colleges and so forth. It’s just a natural progression. I also predicted that there would be hell to pay if this day ever came. When women as a rule began to out-earn their husbands, it was gonna be bad for men. Remember the old adage…

Folks, there are just things that are part of human nature and have been part of human nature since the beginning of humans — and when you upset them, it’s like not necessarily progress. You study any period of anthropology and social science, and you can’t escape it. You might want to ignore it and you might want to say you wish it weren’t true, but you go back to the Butt Sisters era, the Paleolithic Era. You have the hunter-gatherers and you’ve got the nurturers and that sort of thing.

And it really is upsetting the applecart because it’s reversing roles, and now when you reverse roles, people have to start playing roles and they have to start pretending to be what they think is expected of them. The amount of money… According to this story, the amount of money that a wife or a woman earns more than her husband is not a factor. “[T]he amount didn’t appear to be relevant: ‘Whether the wife earns a little bit more or a lot more doesn’t'” matter.

Just the fact that she earns more makes her think less of her husband, and that’s what this boils down to. No matter how much you don’t want to hear it, no matter how much you want to think we’ve progressed way beyond this, there are just certain things that feminism and liberalism cannot really change — and one of those things is natural-born human nature. I would submit to you that much of feminism, in fact, was founded because of the anger a bunch of women had with human nature and were trying to overturn it. “Indeed, some of the women [Ashley] Ford speaks to shrug off the issue.

“A few wish their partners earned more but wouldn’t want them to take unfulfilling jobs. Others, like Ford, wish instead the culture would catch up with the idea that it doesn’t matter who brings home the bacon as long as the family has food.” But, of course, that’s not realistic. Have you heard the old saw about how men define themselves versus how women define themselves? The answer to this is not acceptable in modern-day America. The truthful answer to that — the truthful answer to both those questions — is not acceptable, because the answer flies in the face liberalism, progressivism, feminism, or what have you.

Let’s just take this survey and this story: “Millennial Women Are ‘Worried,’ ‘Ashamed’ of Out-Earning Boyfriends and Husbands.” Well, what this story doesn’t tell you is what those boyfriends and husbands feel or think at the same time. Why would a woman be “ashamed” or feel “worried” about earning more money than their boyfriend or husband? Why and what are the feelings of the men in these examples? How does one of these husbands or boyfriends who knowingly earns less than his girlfriend or wife…? What is his self-image? What is his self-esteem? Now, in truth, the enlightened would say this shouldn’t matter at all. A couple is in it as a couple, and you pool everything that comes in, and it’s the gross amount that matters.

It doesn’t matter who’s contributing to it. And that’s what everybody should focus on. If it provides financial comfort for the family, then that’s all that matters here. But that ignores basic human nature. Anyway, I’m not gonna take it any farther than this, because there’s nothing to gain by doing so. Much of this is self-explanatory anyway.

The bottom line here is, how many of you ever expect to see a story like this? I mean, we do, every campaign we hear about how there’s still so much discrimination against women. And, you know, women’s studies are like race studies; they can never solve it. And women’s studies have to be based on the fact that women are discriminated against. Women are victims of who? Predatory men. Mean-spirited, predatory men. All these imaginary rapists on college campus that these women and these reporters make up. The Duke lacrosse case, University of Virginia.

So if you’re one of these women that out-earns your husband or boyfriend, and the news every day is how you’re such a victim, and women are such victims and men are these predators and men are mean-spirited and men are keeping women down and mean are denying women the opportunity, you must feel like quite the exception. You must feel like you’re quite abnormal. “I’m doing so much better than other than people, I don’t feel comfortable, oh, my God.”

And what’s unstated here is these feelings that are reported here as shame and worry, shame to themselves, I don’t think that’s what it is at all. I don’t think these women are ashamed of themselves. They may be worried, but they’re not ashamed of themselves. They are worried that the fact they earn more is not going to be good for their husbands or boyfriends’ egos, self-esteem, or what have you. And they don’t want to have to mother their boyfriend.

They don’t want to have to mother their husbands. In fact, they want it to be the other way around. At another time this wouldn’t have even mattered, but there’s been so much focus brought to this by virtue of feminism and women are victims and men are the predators. I thought it was just fascinating, ’cause I don’t think anybody would believe this story based on what the news — at least once every campaign is about how unfairly women are still treated.