Everybody Knows What Sean Spicer Was Trying to Say

RUSH: The Sean Spicer stuff, again… (sigh) See, this is one of these things that’s much ado. Everybody knew what he was trying to say, and you know something, folks?

He was asked a question, he answered it, and a reporter said, “Wait a minute, do you maybe want to try saying that again?” So Spicer said it again and clarified what he meant, and that was that. There was a delayed reaction of outrage to this. Some time passed, and I’m sure what was going on is the left was getting their ducks in a row and they figured they had something here so they launched a little bit. The outrage here did not occur instantly in the pressroom. You know what it reminded me of somewhat? 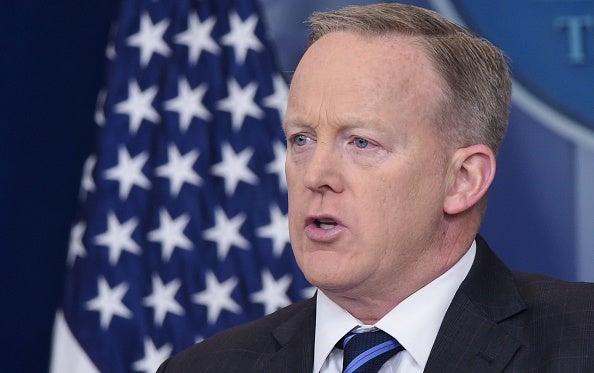 You may not know this. Some of you may not remember. But for five weeks, I appeared on the ESPN NFL Sunday pregame show. I played the role of sort of an official. You had the main panel of people there, four of them seated discussing games coming up that day. I was seated off to the side listening to them discuss, and, if I heard something I wanted to join, then I would hit a button. And in the control room they would have a graphic of a red penalty flag being thrown across the screen, signaling I wanted in on the discussion, conversation.

And the discussion was Donovan McNabb and what was wrong with him and why he wasn’t playing well. And I spoke up and I said (paraphrased), “I think you guys are maybe giving McNabb maybe a little bit too much credit here that he doesn’t deserve. He’s not played that well. The defense has been carrying the Eagles,” blah, blah, blah, blah, blah. And I said, “There’s a little bit of a racial component here, too, because I think there’s a desire for black quarterbacks to do well on the part of the media, and so that’s why they’re wringing their hands.”

Steve Young agreed and some other people agreed, and the program ended. Nobody said a word. On the Sunday night postgame show, nobody said a word. On Monday on ESPN, nobody said a word. There was nothing controversial about what I had said. Steve Young had even agreed with it. Tom Jackson discussed it with me, argued a bit, but it ended peacefully. Nobody was angry. Nobody was upset. Nobody thought anything — until two days later, when the Philadelphia print media, there must have been three or four columns all oriented toward the same thing about how I was a pig and all this.

It took two days for it to erupt. For two days, nobody had a thing to say. There was no reaction to it whatsoever anywhere in the media or in the NFL, and it’s almost the same thing here with Spicer. It didn’t take two days, but I’m telling you: The reaction was not instantaneous, and everybody knew what he was trying to say. I’m not… I don’t want to be misunderstood here. I think when you’re the press secretary for the president of the United States, you don’t make mistake like this. This is an unforced error that’s not helpful and not needed.

Saturday Night Live has been trying to destroy Spicer since the first day on the job, and this is just… It’s classic. And I just wanted to mention this, because they all know what he was trying to say. They know — and he just got a little bit exuberant in his attempt to support Trump going in and taking care of Assad. He was just trying to be a, you know, a loyal soldier and point out that Assad had done things to his own people that not even some of the most vicious war criminals had done. And World War One… World War TWO, there weren’t any battlefield uses of chemical weapons. But, of course, there was all kinds of sickening stuff used in the concentration camps, and that’s where they got Spicer.

They made it look like Spicer didn’t know that Hitler had eliminated six million Jews with poison gas. “Whoa, what an idiot. I can’t believe some guy with such a limited knowledge of history –” Of course it’s absurd. It illustrates the danger here of comparing anybody to Hitler. If you’re gonna do it seriously, stop and think it and don’t do it. Because I don’t care who you come up with, there’s nobody that’s ever gonna be any worse than Adolf Hitler. Not with the generations of people who are still alive.

Well, yeah, Stalin, but nobody saw Sta — Stalin presided over — well, the Soviet Union, folks, has presided over the death of tens of millions of its own citizens via starvation and any number of other things. Stalin was one of the biggest murderers on the planet. Mao Tse-tung, same thing. All of these leftist communist leaders are mass murderers. Pol Pot. They’re all mass murderers. But the deaths all happened out of sight.

And while Stalin was doing what he was doing, the New York Times was praising him and ignoring the deaths. A guy named Walter Duranty, reporter for the New York Times, got a Pulitzer Prize for ignoring the mass murder committed by Josef Stalin. The Jewish Holocaust, and referring to the concentration camps as Holocaust centers, it was an unforced error. But still, folks, it’s important to understand here, if the same mistake had been made by Josh Earnest trying to support Obama, there wouldn’t have been anywhere near — he would have been given whatever number of chances he needs to say it right, to apologize.

There would have been any Saturday Night Live parodies and there wouldn’t be any focused efforts by people in the media to force him out and to force Obama out, how could you hire such a lamebrain. None of that would be going on. Everybody would understand that Earnest, we all know what he was trying to say, he just misspoke. But that kind of latitude is not offered to Trump people, and this is a classic example.

Spicer went to the Newseum today. He was being interviewed by Greta Van Susteren, and he just totally fessed up and said it was a mistake and it was embarrassing and a very poor service to the president and so forth. You know, the president of the United States, you figure can get the best spokesman in the world. Whoever the best spokesman is, he can get him. And these guys, the blood is in the water. While all this is going on, the — folks, the truth of all this is that Trump is running rings around these people.

RUSH: joe in Durham, North Carolina. Welcome, sir. Great to have you on the EIB Network. 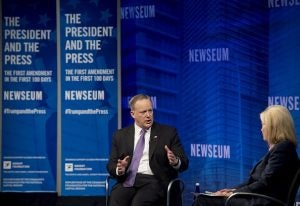 CALLER: Yeah, Rush, I just wanted to say when Sean Spicer talked about Hitler not using poison gas, I knew immediately that he was talking about using poison gas in a military setting. My relatives from that far back are Polish Jews so I lost people in the camps. He used gas in the camps to murder people, but he did not use gas in a warfare setting.

RUSH: Yeah, and you knew that’s what Spicer meant?

RUSH: Well, here’s the thing about this. He made his statement, and somebody in the press corps said, “Sean, wait a minute. You want to explain that?” So he did it again, and after he explained it, nothing. The delayed reaction was about a half hour, 45 minutes. And I’m sure the media people got together, “Do you realize what this guy said? You believe this? Do you believe this? This guy doesn’t know that Hitler gassed people in the camps, can you believe this?” Bammo, that’s all it took.

My point is, his original statement, everybody knew what he was trying to say. Look, do not mistake me here. What I’m doing here is telling you that the outrage here, a lot of it, is way out of proportion, ’cause they knew what he meant. He should have said it better. He shouldn’t have even gone there. You know, as a media figure of countless years, there are just certain things you learn. There’s no “there” there, when you start invoking Hitler.

The left can do it. The left can call Bush Hitler, and they can call Trump Hitler, but we can’t. We can’t bring it up, can’t go anywhere near it. And it’s just it’s a double standard, but it doesn’t get you anything. Spicer was trying to be super loyal and supportive of what Trump did in Syria, ’cause he’s got a media there that are trying to destroy Trump every day and trick Spicer and trip ’em up and mischaracterize and misstate what Trump’s doing, trying to expose that Trump’s a liar, is dishonest.

And Trump really ticked ’em off when he went into Syria and had so much public support for it and did it so well, that miffed them. Plus it also demonstrated that he wouldn’t have done that if there’d been close ties with Putin. So by going into Syria with the 59 Tomahawks, he blew up a giant media dream. So somebody had to pay the price for that, and that was Spicer. But he brought it on himself. He knows it. That’s why he’s been apologizing.

Yeah, not enough time for another call. We got things backing up again. It usually happens here ’cause news never stops but we are on top of it.