Instead, what’s gonna happen is another omnibus spending bill. When you hear the word omnibus, there’s a word you need to use, and it’s called catch-all. It’s a catch-all spending bill that will take the government through the end of September this year, maybe the end of October. And they’re just gonna throw whatever they need to operate the government at current baseline levels. There’s going to be no budget discipline. There aren’t gonna be any attempts to cut spending or any of that. And it’s gonna infuriate people.

The Republicans won for express reasons, and many of them include reducing the scope of government, the reach of government, the size of government, get spending under control. And it looks like no effort is even going to be made. And then Breitbart just dropped this story this morning. “GOP Leaders Dropping Border Wall Funds, Says Report — Federal funding for one of President Donald Trump’s premier policy proposals may be excluded from the House GOP’s budget for Fiscal Year 2017-2018.”

That’s not the omnibus. The budget for the fiscal year 2017-2018 would start in October. The omnibus is just enough to get us through the rest of this fiscal year. “House Democrats, along with a few House Republicans, are working around-the-clock to make sure funding for the estimated $12 billion border wall is not factored into the GOP budget, according to a report by The Hill.”

Now, that’s a caveat. When it’s reported by inside-the-Beltway Drive-By Media, you have to pause, and you have to say, “Is this true?” I have no doubt that there are members of the House and Senate Republicans and Democrats who are telling reporters, “Nah, no money for the wall. We don’t believe in the wall. We’re not gonna authorize that. There isn’t gonna be any wall. There isn’t gonna be money for the wall.” And I would not doubt the media running with it. But it may not be official. It may just be part of an overarching plan to deny Trump what he promised during the campaign. Because, believe me, despite everything else going on, that, too, is still going on.

We have a quote here. Will Hurd, Republican, Texas, and Martha McSally, Republican, Arizona, are “two Republican lawmakers teaming with Democrats to stop the funding of the border wall, despite both representing districts that share a border with Mexico.

‘We recognize the need for robust border security and infrastructure to ensure public safety and increase cross border commerce,’ Hurd and McSally wrote to the Trump administration in a letter, according to The Hill. ‘We also have an obligation to be good stewards of taxpayer dollars.’ Establishment Republicans in the Senate, like Sen. John McCain (R-AZ), are also teaming with Democrats to stop the border wall, with McCain worrying more about the sentiment that Mexicans have towards America.” 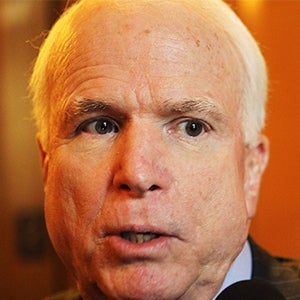 So, anyway, the threat here of not having a real budget, having an omnibus, no money for the border wall, none of that makes up the news of the day on the budget side. And this is going to provide another little challenge here for the Trump administration to overcome.

RUSH: Palm Harbor, Florida, as we head back to the phones on the EIB Network. It’s Jake, and it’s great to have you here, Jake. How are you?

CALLER: I’m very good, sir. Thank you. My comments go back to what you were talking about in the first hour with they’re not gonna be able to find a way to pass a budget and there’s not gonna be any money to build a wall.

CALLER: Yep. Well, my little word of advice for them is since Donald Trump told us what he was going to do and the support that he had, we were able to temporary slowdown the destruction of the country with the Supreme Court. The second thing for me was building the wall or border security. If they don’t do those two things, there will be a bloodbath and us silly Trump supporters will not put an X beside a Republican’s name in the upcoming midterms. I can guarantee it.

RUSH: Well, just a theoretical question here. If the only people on the ballot are Republican Democrats in this election you’re talking about, it’s a Republican that did not vote to help Trump, who do you vote for?

CALLER: Well, at this point it doesn’t seem to make any difference because we’ve given the Republicans everything they’ve wanted for the last four years, and they have done absolutely nothing, so to quote Hillary Clinton, what difference does it make?

But the way they’re going to become convinced is not polling or any of that. I think it’s going to take some time before everybody in Washington actually comes to grips with the fact that Trump is actually president and is not temporary and this is not some kind of aberration. And all of this hinges on Trump continuing to be Trump and hanging in. I’m out of time here. I need to expand on this. I think they’re eventually gonna come around. Right now it’s typical the Beltway, resist this and maybe it isn’t happening.

RUSH: Well, now, look. My belief has not changed. There’s still many people in the Republican establishment who do not want Donald Trump to succeed. Folks, that hasn’t changed, notwithstanding the Syria attack even though they’re all saying they’re on board and yuk yuk supporting it and so forth. There are still lots of people there that do not want Trump to succeed, even if it means the Republican Party doesn’t succeed for a while; that’s a secondary concern to making sure Trump doesn’t succeed.

I think there’s a lot of people still dealing with the fact that they can make this temporary, that they can somehow — they don’t know specifics. We’re not talking impeachment. I’m telling you some people are dreaming that something’s gonna happen. Trump’s gonna quit. He’s just gonna get tired of it. They can force this to happen or what have you. They don’t know who they’re dealing with. They still haven’t the slightest idea who they’re dealing with.

There is going to be health care reform at some point, and Trump’s gonna see it. There is gonna be a wall. And if it requires tariffs on Mexican goods to pay for it, there’s gonna be a wall. Trump is gonna do these things. He wasn’t just talking to hear his head rattle. I don’t know how all this stuff’s gonna manifest itself.