Searching for the Truth About the DNC Hack

RUSH: Here is Phil in Dallas, Texas. It’s great to have you, sir. Thank you for calling. Hi.

CALLER: Rush, you’ve rightly been asking questions about the alleged Russia hacking the election story. There’s one very interesting aspect of it that I can’t see anyone asking questions about. I would like you to ask about it. There are numerous stories — from Wired.com, CNS News, the Daily Mail in the U.K. — that the Democrats would not allow the FBI to look at the allegedly hacked Democrat servers. I’m wondering. If you genuinely believe that your servers have been hacked in an effort to subvert a national election, why would you stop the FBI from investigating?

RUSH: Well, I can think of one answer. Because there was an election that was rigged, and it was the Democrat primary in which Hillary — working with Debbie “Blabbermouth” Schultz — rigged the game against Bernie Sanders, and the evidence of that was probably on the DNC computer network.

CALLER: Yes, sir. I would agree.

RUSH: If I had to guess at one thing. But I think there’s probably more than that.

CALLER: Oh, so do I. I think there’s another answer.

RUSH: What is it?

CALLER: Well, the Democrats told the FBI, “No, you’re not coming in here and looking at our stuff. We’ve hired a third party, an independent party to look at these things, and we’ll have them get back to you with our evidence and finds.”

RUSH: CrowdStrike was the name of the company, I’m pretty sure, and they have connections with (whispers) the Russians!

CALLER: Rush, doesn’t this seem sort of like a staged crime scene? If my house is burglarized and I run to the police and the press screaming, you know, “My house has been burgled! Thousands of dollars in merchandise are gone,” and the police show up to investigate, and I tell them, “No, no, you’re not investigating this. I’m gonna let a third party come in here and they’ll investigate it and they’ll walk around the crime scene and they’ll arrange things and they’ll look at evidence. Once we have the picture assembled for you, we’ll get back to you.” That seems horribly suspicious to me. 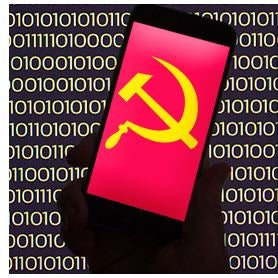 RUSH: Well, let me tell you, not only that, if your house is burgled, as you say, and the cops or any other law enforcement authority come in and they want to investigate and you tell ’em,” No,” the next thing they’re gonna do is investigate you —

RUSH: — for not letting them investigate the burglary. They’re gonna go, “What do you mean you don’t want us to find out? What are you hiding?”

RUSH: And they’ll start investigating you.

CALLER: Absolutely right. But I have done searches trying to find mainstream media news accounts of this aspect of the story. You will not find it from CBS, ABC, NBC, CNN.

RUSH: Now, let me tell you how you can find this. And I’m not saying that you can swear by what you’re gonna find, but if you’ll do a Google search of CrowdStrike, CrowdStrike was the firm the DNC hired to come in and pore through their computer network, and then the Democrats told the FBI that we will share with you what CrowdStrike finds. CrowdStrike, they’re a legitimate company, but they do have hacker connections with the people like Guccifer 2.0, which is supposedly a Ukraine hacker with ties to the Russian… The current edition of the KGB. I mean, it’s highly suspicious, and you’re absolutely correct to have your antennae raised over this.

CALLER: There’s one other aspect I think is interesting.

CALLER: WikiLeaks just revealed that the in the CIA cyber armory they have tools that could make it look like the Russians had hacked you.

CALLER: It makes me wonder if this was arranged. They wanted to blame it on Trump. They had Brennan at the CIA, have the DNC servers hacked when the information was actually released by a DNC insider.

CALLER: And then they had CrowdStrike assemble the evidence to point at Trump, and then they let the FBI have CrowdStrike’s result. This is a staged crime scene, Rush.

RUSH: No question about it. I don’t know if every aspect as you’ve laid it out is true, but there’s no question the general theory is accurate. The WikiLeaks dump, the original WikiLeaks dump… There have been subsequent dumps since then, but the original dump of all of the CIA stuff that WikiLeaks. The whistleblower somewhere in the CIA gave it all to WikiLeaks. They published some of it. I can’t remember the category. But you’re right, there was discovered a bunch of CIA hacking programs that have the ability to make it look like the Russians or the Chinese or North Koreans are actually doing the hacking. They found a way to actually attach Russian, Chinese fingerprints or signatures to the hack. And was the Russian fingerprints that have supposedly been found, the Russians wouldn’t leave evidence they were there.

RUSH: If it was a genuine hack and they were genuinely trying to secretly acquire information, they would not leave evidence they were there. But the CIA or somebody else might do so wanting to point to the Russians. But “staged crime scene,” I have no doubt. I also think that the refusal to let the FBI pore through the DNC network is to hide various things like what we’ve just been discussing, the existence of these CIA hacker programs that make it look like others have actually done it.

RUSH: Well… Well, thanks to callers like you. I will tell you, the rule of them on this stuff, folks. It’s not a hundred percent, but it’s so close it’s scary. When the Democrats start accusing other people of things, you can pretty much make book the Democrats are the ones doing it themselves. And when they start predicting, supposing, analyzing that this could have been done that way, it’s because they’ve been doing it that way themselves. That’s how they’re aware of it. Their fingerprints ultimately are gonna be found all over this.

RUSH: Okay. This CrowdStrike outfit. CrowdStrike is run by a Ukrainian who happens to hate Russia with a passion. CrowdStrike, in fact, sees Russia everywhere, and if they are sourcing things for the DNC, it would not be hard to imagine CrowdStrike telling the Democrats, “The Russians are involved with Trump.” The guy just has a… Well, he hates ’em. He just despises them. Last week CrowdStrike got caught lying about the Russians hacking a Ukrainian military app. It turns out that it wasn’t hacked at all.

CrowdStrike even made up stories about the havoc the Russians caused in Ukraine. They published a bunch of lies. These are the people the Democrats had come in and analyze their computer network rather than let the FBI come in. After everybody was just caterwauling and screaming that the Russians hacked the computer network, they said to the FBI, “No, you can’t come in. We’re gonna let CrowdStrike do it, and whatever CrowdStrike finds, we’ll pass on to you.”