Nikki Haley Gives Them Hell at the UN

RUSH: I also have Nikki Haley, a couple of bites of Nikki Haley just ripping it at the United Nations earlier. Here’s take one…

HALEY: Now we must move to a new phase, a drive toward a political solution to this horrific conflict. We expect the Syrian regime and its allies to take the U.N. political process seriously, something they have not done up until this point. We expect Russia and Iran to hold their ally accountable and abide by the terms of the ceasefire. We expect this council to speak loudly and forcefully when the Regime or its allies undermine the political process, and countless of our own resolutions. The United States took a very measured step last night. We are prepared to do more.

HALEY: But we hope that will not be necessary. 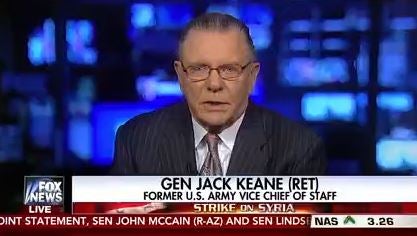 RUSH: That’s another point. Jack Keane, the military guy — the former general who is now a strategy analyst at Fox — kept saying (paraphrased), “This is so limited. What we did last night, this is a limited attack!” He said, “It sounds like a lot, 59 Tomahawks.” But the Russians were alerted, by the way. There were Russian troops there. It’s called a confliction notice. In intergovernmental language, it’s called a confliction notice and basically… We didn’t call Putin.

We sent word to the Russian troops on the ground that it’d be wise if you guys hightailed it. They had plenty of time to get out of there so that there were no Russians harmed. The military target was the chemical weapon stocks, and General Keane said, “This is limited. This is very, very limited. It sounds like a lot of Tomahawks, but the target is very limited. There’s no reason to be having an overreaction to this,” and Nikki Haley just said the same thing, that this was essentially a very light response compared to what we could do if we had to do it again.