Discussion of the Samsung Galaxy S8 Naturally Leads Us to Apple

RUSH: Galaxy S8. Um… (clicking tongue) You know, I’ve been burned once today. A guy asked me about Augusta National. I starting answering the question and got a bunch of snarky e-mail from people ripping me for avoiding the issues. It’s Open Line Friday, for crying out loud! Let me get to the Galaxy S8, because I said it’s gonna take me in to Apple, and it will. The Galaxy S8 was just announced by Samsung. If it is what it looks like, it’s the best phone they’ve ever made. It looks like what all of the rumors say the next iPhone’s gonna be. 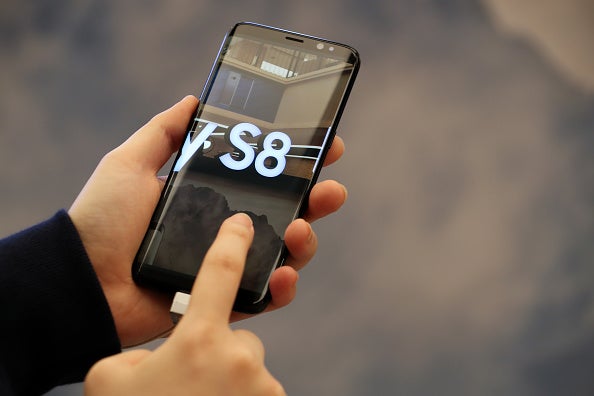 In the past, it’s always been Samsung that has not only been accused of copying Apple, they have been copying Apple. But with this phone, the Galaxy S8 and the Galaxy S8 Plus, it features a screen that is 83% of the front of the phone. There are no bezels. There are two sizes: A 5.8-inch screen and a 6.2-inch screen. People who have seen it are raving about it, but it has a problem. A, it’s Android, and the problem with Android is there’s no eco-system. It’s not… It’s fragmented. There aren’t any software updates.

There’s no way to keep the operating system modern. This is where Apple is just cleaning up. The Apple eco-system from iPhone to iPad, to Mac, to iCloud, it’s incomparable. And that’s the thing that’s actually keeping Apple customers with Apple, if you wanted to pick one thing. The iPhone of course runs circles around Samsung’s phones both in terms of quality and style and operability. There’s no question. This one, however, the S8… Remember, the tech media, folks, is like the mainstream media.

To the tech media, Apple is the Republicans, and Samsung’s the Democrats. I mean, Samsung just released a phone last year that exploded, and the media treats it like, “No big deal. No big deal. Samsung’s expected to rebound greatly and royally,” and they keep singing the praises of Samsung. I don’t… I’ve never had a Samsung phone, I’ve never used Android, so I’m not really equipped to comment on that. I just say if you want one, go get it. There is no accounting for taste. If you like country music, doesn’t mean you’re wrong about anything.

If you like classical, doesn’t mean you’re wrong about. If you like Chinese opera, doesn’t mean you’re wrong. It just means you’re weird. My experience, however, is that Samsung phones — because of the media bias — always arrive heavily promoted, really, really hyped, and something always happens, and it fails to realize or meet the hype. Like last year’s Samsung Note 7, whatever, where the batteries kept exploding. I mean, people’s houses ended up on fire, while the phones are recharging. The discussion of the S8, though, naturally takes you to the iPhone 8 or whatever they’re gonna call it.

The rumor mill on that is as it is every year. “The phone’s gonna be late! The phone’s delayed! The phone’s got problems with this component and that component.” The media cannot wait to tell you everything it’s gonna be wrong with the new iPhone. They can’t wait to tell you what’s gonna be late with the new iPhone, while singing the praises of Samsung so-so phone after Samsung so-so phone. But you have to figure one year Samsung may get it right. It is gonna appear… Apple’s new phone is also gonna have a bezel-less screen. 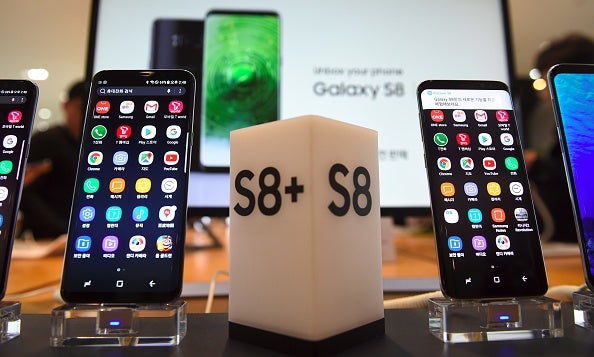 So it’s gonna be mostly screen just like Samsung, but Samsung’s is gonna hit first. So to the average, ordinary consumer it may look like Apple’s copying Samsung this time around, even though that won’t be the case. But that’s not really the problem. As an Apple devotee, there are things happening there that really alarm me. They’ve been happening for a while. They alarm me both from a consumer standpoint and if I was an investor I would really be bothered. Now, I know Apple’s making money hand over fist, and there’s no end in sight.

They keep setting records, and I understand all that.

Seventy-five percent of Apple’s revenue comes from the iPhone. But it’s little things that bug me, like last year the iPhone 7 Plus, the jet black version? You couldn’t get one for two months! Look at the AirPod. They announce these things in September, say they’re gonna available in October. They weren’t available until December, and even now it takes six weeks to get a pair when you order them. The Apple Watch! They ballyhoo it for a year and a half, promote it, show it, demo it.

They finally announce it’s gonna go on sale and be delivered at the end of March. For three days it was, and then for three months you couldn’t find one. The Apple TV. The Apple TV remote? You lose it in the sofa? You can’t tell which end is up and down by virtue of the way it feels. It’s too small. The Apple TV is not 4K. They haven’t upgraded 4K or six months or even a year. What would it take to make it 4K compatible and, say, have that available for last Christmas? They hasn’t had an iPad Pro update for a year and a half, the 12.9-inch.

They’ve got hundreds of thousands of employees. I don’t understand it! They have these products that they announce; you can’t get them. They can’t make, in mass quantities, what they design for the day that they’re going to go on sale, the day they release them. It just puzzles me. The Mac Pro, they just had a big announcement about, but the Mac Pro is three-year-olds and hasn’t had a single upgrade. It got to the point they weren’t saying anything about it, and people said, “Maybe they’re just gonna forget it.”

And the Pro line, that’s not something you have to keep secret. Professional users need their stuff. There aren’t any trade secrets here. Samsung doesn’t make an equivalent. But the Dell and PC makers are trying to fill the void that the Mac Pro used to fill. Now, they’re gonna fix it, but they may not have the replacement out ’til 2018 or 2019. It’s just a series of little things that do not make sense to me in terms of availability, upgrades. Apple announced last week a new iPad, which is a low-end, entry-level iPad that is a massive improvement.

They’re trying to goose sales of the iPad, which have slowed down. Because the iPad’s made so well, people don’t recycle them as often as they do the phones. That’s understandable too. But I don’t know. It’s just… It worries me. I want Apple stuff ’cause I love it. I want it to be plentiful, and I want them to be able to supply what they say they’re gonna supply on the date that it’s gonna be available. I want it to be the best it can be. I want the stuff to just get so good… That’s one of the reasons I’m hating growing old. The first time I feel bad about growing old is all the tech I’m gonna miss out on.

RUSH:  Now, I got an email from somebody saying that I copped out on the answer to the Samsung S8, the Galaxy S… Did I cop out on it? I’m not gonna sit here… If you want one, go get it.  You know, I’m not one of these people that cares. (sigh) I have no idea about this phone.  It hasn’t been released yet.  All I have is Samsung track record history.  And based on that, big whoop.  But this could be the first one that’s different.  But if you’re into Android and if you like that stuff, it’s made to order for you. Have fun and enjoy it.

It’s not up to me to make you feel guilty over what you buy.  I have different concerns.  My phone, my company, is Apple — and they’re not humming on all cylinders right now, and it concerns me.  I think if you announce something for sale, it better be there!  There’s no reason to have to wait two months for something they announce is for sale. With as many employees as they’ve got, as many people they’ve got in the manufacturing assembly lines, it just doesn’t make sense to me.  And, frankly, I’m getting tired of it!  But that’s just me.