Trump Withstands the Onslaught and Delivers on Promises

RUSH: Trump is addressing a group of people in Washington, and I’ll tell you who after a little bit of it. Just want you to get a flavor for this.

RUSH: They love him in this group.

RUSH: That’s all I’ll tell you.

RUSH: I’ll tell you who it is in a minute.

THE PRESIDENT: Washington and Wall Street have done very, very well for themselves. Now it’s your turn, and you’re gonna be also sharing the wealth.

THE PRESIDENT: And, you know, for many years we’ve been taken advantage of by other countries. All over the world, they took advantage of us. We had leaders that didn’t have a clue or worse. That’s not gonna happen anymore, folks. It’s not gonna happen anymore. And you see what’s going on right now. In fact, the trade deficit went way down. Just announced before I got on stage. And I will tell you, we’re gonna have a whole different set of values when it comes to representing our country.

RUSH: That I can tell you right now.

THE PRESIDENT: This election was all about returning power to the people. I’ve spent my life working side by side with American builders, and now you have a builder as your president.

THE PRESIDENT: One of my first acts as president was to stop one of the great sellouts of the American worker. I immediately withdrew the United States from the disaster… This would have been a disaster.

THE PRESIDENT: This would have been another NAFTA — which, by the way, is a disaster. I took you out of the Trans-Pacific Partnership.

RUSH: Okay. That’s enough. I just wanted to give you a flavor. He’s being overwhelming standing ovation’d. He is being applauded left and right. He spoke with CEOs this morning. He had a giant chart that is too big to describe listing all the regulations that the CEOs and others have to navigate in order just to build anything. Today, he’s meeting with the building and trades unions. When he began this, he started with every job there is. The bricklayers, and they cheered. Then the plasterers, and they cheered. And the drywallers, and they cheered.

He went through every job there is, because he hires them. He knows who you are. He said, “You’re the builders! You’re the greatest builders, and you can build anything. With the talent in this room, we can build anything again in this country,” and they’re standing up and they’re going nuts. This is a Republican president addressing trades union rank-and-file and leadership. And he’s being warmly, warmly received. This is something that we haven’t seen in quite a long time, and this is another constituency of the Democrat Party that he’s taking direct aim at here.

One observation here about President Trump — and I know a lot of you think about this a lot. A lot of you when you watch the serious effort to destroy not only the man and his life, but his presidency — you watch it, you see it every day — you get angry. But it’s very difficult to imagine it happening to you. Most people do not think that they are prominent enough to be the target of this kind of total destruction campaign. But when you try to put yourself in that situation and you try to imagine what it’s like, it’s very, very difficult.

I just have to tell you… We made mention of this yesterday. While all of this is going on, Trump, when you get down to nitty-gritty, is undaunted. He is doing what he said he was going to do during the campaign. He is dismantling as much of what Obama put in place as he can. He is ripping apart so much of what was destructive about the Obama administration. He is committing and following through on every promise that he made. Now, this is not a… I’m not trying to hype Trump or sell you on Trump.

I’m just observing what I see here, that this effort to distract him, to sidetrack him, to ruin his mad, to turn him into a sourpuss, to turn him into somebody constantly whining and moaning, it isn’t working. He is continuing. He’s focused on what he said he was going to do that, in his mind, constitutes making America great again. I think it’s a monumental feat here, and I think it requires a certain personality type. I really do. I don’t think there are very many people that could bear up under this.

As evidence, look how easy it’s been for this Washington media-Democrat complex to paralyze most every Republican in town, and not just this year. Any number of years. You go back in the past; it’s been easy for them to paralyze Republican opposition, to stop it dead in its tracks. It’s not working on Donald Trump. Despite their best efforts to make it look like it is working, it isn’t. He is continuing to fulfill his promises. He’s continuing to unravel elements of the Obama administration that he can touch by virtue of executive order and this kind of thing.

I don’t think this characteristic is played up enough, this human characteristic, this ability to bear up under an assault like this that very few people endure. A lot of people in politics do, but compared to the entire population of the country, there aren’t a lot of people who can totally relate and understand what something like this is like. And, therefore, they may not be able to fully appreciate the yeoman effort to stay focused and remain undaunted and not be sidetracked by this. It’s an amazing thing, and I’m certain it requires a certain kind of ego, a certain series of character traits in order to be able to do this.

They say Trump’s an egomaniac, and they say that he makes everything about him and he’s totally self-conscious. I wonder about that. I know he’s got a healthy ego. But the main pitfall that most people face is being totally defined by what other people think of them. And that is rooted in self-consciousness, thinking about yourself all the time and wondering what other people think of you and wondering what other people are saying about you. Apparently, Trump’s unaffected. He may be disappointed. He may not have expected it would be this bad. But it doesn’t matter. He’s forging ahead.

It doesn’t appear that this is affecting him psychologically at all, and I just think that’s overwhelming. I think it’s amazing to watch. I’ll give you something else that Trump is doing here. This is in the Wall Street Journal today. You know all these travel bans that these little judges have shut down and the left thinks that they have won and they’ve stopped Trump’s efforts to keep bad actors out of the country. Look at what Trump’s doing on building the wall, forging ahead on enforcing the law in sanctuary cities. And here in the Wall Street Journal — and I don’t know how you’re gonna feel about this, but Trump is not being deterred. 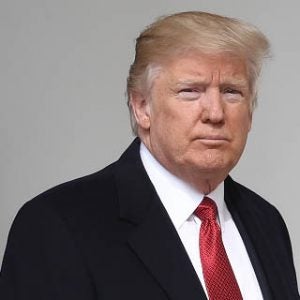 Headline: “Visitors to the U.S. May Have to Hand over Their Phones and Facebook Passwords Before They Get a Visa — The Trump administration mulls ‘extreme vetting.'” Well, one of the ways he wanted to extreme vet was to deny entry to the country for people from certain the countries that might be tending to commit acts of terrorism, who might be susceptible to being turned and radicalized once they’re here. The court shut that down, said, “You can’t do that, Mr. President! You can’t do that.”

This is the kind of thing they think they’re succeeding in stopping Trump from doing. This is nothing more than a fulfillment of a campaign pledge to make the country safer, to keep bad actors out of the country, and if they stop him one way over here, he’ll find another way to do it over there. “Trump Mulls ‘Extreme Vetting’ — Foreigners who want to visit the U.S. even for a short trip could be forced to disclose contacts on their mobile phones, social media, passports and financial records and to answer probing questions about their ideology, according to Trump administration officials conducting a review of vetting procedures.”

As I say, you know, give the Drive-Bys anywhere from an hour to a day to learn about this and catch up on this, and you haven’t seen anything. You think they were outraged over the travel ban? Wait ’til you see ’em blow up over this. They’re gonna have to let go of the Susan Rice story before they can recognize this.