RUSH: I mentioned just in passing right before the end of a segment that the Twitter storm erupted last night when it was learned the details of the marriage of Mike Pence and his wife, Karen. Leftists are appalled that Pence does not eat in public with women without his wife along. They’re outraged at this. You should have seen the Twitter storm. He does not attend events with alcohol without her at his side.

Now, let me ask a question. If some leftists had a very, very open marriage — well, let’s look at the Obamas. Do you know where Barack Hussein O is right now? He is on a deserted island in Tahiti for a month with 54 men. It’s the old Marlon Brando estate. Marlon Brando had an island. He was first interviewed from that island by Larry King Alive. And he’s been there like a month, he’s scheduled to be there a month. We haven’t heard a word about Michelle Obama, but there isn’t any Twitter storm over this.

What if a different leftist couple went public with the details of their open marriage about how each partner sleeps with other people but they trust each other and they have great times together and they raise their kids. It would be celebrated, it would be applauded, the left would think that it’s a great example of openness and trust and tolerance. But the liberals on Twitter were beside themselves last night when they found out that Pence will not eat in public with women without his wife along.

Well, let’s look at the opposite of that. Let’s say one night — pick your spot — let’s say at The Capital Grille. Let’s say one night Mike Pence is in there having dinner with another woman, not his wife, and somebody in the media sees it, maybe snaps a picture, do you think there might be stories intimating something not right there? Do you think somebody would take notice and think it was odd? Could very well be. Nor does he attend events with alcohol without her. She is his prayer partner. They’re really lambasting that. And he doesn’t go anywhere with alcohol without her.

It sounds to me like you got a couple of really good friends here who protect each other and who do everything they can to protect their marriage. You know, I was mentioning this the first time, and I checked my email, and I got few emails from women saying not cool for a guy to go to dinner, a married guy, with a different woman, just not cool. Right? Tongues would wag.

Anyway, I found it interesting that the left went nuts, particularly feminazis. The feminazis on Twitter portrayed this as Mrs. Pence being a totally, 100 percent subservient. I don’t know how you get that out of it, but they did. 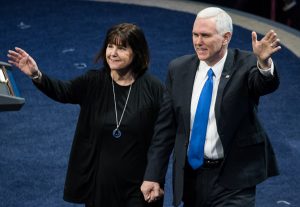 The one that cannot be asked. Don’t roll your eyes. That’s a profundity. The easiest question to answer is the one that can’t be asked. “Mr. Pence, what were you doing with your legislative aide last night at dinner?” If you don’t go to dinner with her, they can’t ask the question. The easiest answer to a question is the one that can’t be asked. Just another way of saying keep it on the straight and narrow, and nobody can hound you. You know where I got that? White comedian Paul Shanklin, as one of the guiding principles of his life. Easier to answer the questions that cannot be asked. So when he goes out… (laughing)

RUSH: I was just looking at one of these tweets in reaction to the Washington Post story on Pence refusing to eat with another woman in public without his wife being present. Some MTV personality said that’s worse than Sharia. That is so backwards; that’s worse than what the Muslims do to women. That’s such an insult to women.