RUSH: We’re gonna start in Holyoke, Colorado, with John. I’m glad you called, sir. Great to have you here with us.

CALLER: Mega dittos, Rush. My pleasure to speak with you today.

CALLER: Hey, I got to listen to Governor Chris Christie on the number one morning show, Fox & Friends, and he reminded me that Obamacare took a year and a half for Obama to put into place without any Republicans. And I think nine weeks is way too soon for us to expect President Trump to get something through, and that just takes me back to what Aaron Rodgers once said. R-e-l-a-x, my fellow Trump fans. Let him get in there and take care of things, because I think with the new sheriff in town, the different factions of the Republican Party haven’t figured out their pecking order yet, so I think we just need to relax and give him time.

CALLER: Well, we have the hard right, Jordans and those people, then we have the squishy Republicans, the RINOs —

RUSH: Wait a minute. Don’t start using leftist terms to describe decent people. Jim Jordan is not hard right. I don’t mean to be jumping down your chili here, but that’s the way the Democrats talk about Jim Jordan.

CALLER: Okay, I’ll retract that, but like the caller yesterday said that the Democrats would rally around a baloney sandwich, and you said whether they wanted mayonnaise or mustard on it, and we as Republicans haven’t figured that out yet. We need to rally around our leader when he’s in control.

And, by the way, there’s another thing. It really sounds good. “Well, you know, Rush, the health care laws in this country, why, it took 50 years for these things to be built out and implemented. You can’t just strip this stuff all away inside of six months, six weeks.” Yes, you can. We’re not talking about repealing 50 years’ worth of stuff. We’re talking about repealing Obamacare.

Now, it may not be quite as easy as I think it is, but I don’t think it’s this hard, either. I’m sorry my friends. I know I’m speaking about things I don’t do. I don’t do legislation. But how hard is it to say this law sucks, we’ve been telling you for seven years we’re gonna get rid of this law because it sucks. This law is damaging people, it’s hurting people, it is not insuring people, it’s not covering people, it’s a disaster, and we gotta get rid of it, and today we’re going to. What’s so hard about that?

“Well, Rush, you gotta have a replacement.” We got all kinds of replacements. We got what was in place before Obamacare happened. Revert back to it. There’s any number of things. My point is I’m not yet convinced that there is a party-wide desire to do it. That seems to be the missing ingredient here as I watched all this go down. That’s just me, folks. It’s just me.

RUSH: We go to Gilbert, Arizona. Hey, David, you’re next. It’s great to have you on the one and only EIB Network. How are you?

CALLER: I was calling with a point that I want to put to all the Americans out there, including myself. We all need to get a backbone. All the people that are in the Armed Services are going overseas to fight for us, and now we’re all sitting back here like a bunch of whiny babies because Trump hasn’t turned this around in two months, when the left has screwed this country over for 30 years. We all need to get a backbone, stick to our guns, start expelling some of these senators who are just siphoning off of this country.

RUSH: Well, we’re gonna get the next chance to do that in 2018. We’re gonna get rid of a bunch of them. You know, the thing about all this — and here I go. By the way, David, thanks for the call. He’s reacting to some emails I had shared in the early segment of the program with some people, friends of mine, who are getting mad at me for not recognizing how much we’re losing and that I am avoiding the truth, and that it’s really desperate in Washington, and this all feels temporary there.

I don’t want to redo the whole segment, but the subject was how so many people are complaining to me about things and at the root of the complaint’s the media and, for example, Democrats losing all these sits, guy says, “You gotta stop talking about that. We hear you and we get mad every time you do because they’re not losing, dude. They’re not losing.” But they are.

So he’s reacting anyway. He’s reacting to my explaining how so many people complain to me and whine about things. I think it’s largely ’cause they think I can do something about it, since I have this, the Golden EIB Microphone. But the fact remains, the Democrats, as a political party, are in big and deep trouble. Now, you may not see manifestations of it.

This guy, Tom Perez, he was Obama’s labor secretary. This guy is one of the most mean, vicious partisans out there. I don’t think he’s ever been elected to anything, it doesn’t matter, he was Obama’s labor secretary. He’s the new chairman of the Democrat Party National Committee, and he just fired everybody. He is cleaning house in there. You don’t do this if your machine is running at full speed with no bumps in the road. And they have lost all of these elections. 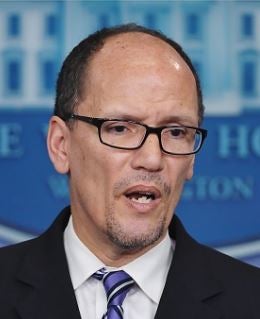 Who is going to be the big presidential candidate for the Democrats? If you had to pick somebody right now, who’s on their bench? There isn’t anybody. Now, Biden’s running around, “If I’d a been the nominee, I’d a won, I’d a beat Trump,” in a direct insult and slap at Hillary. The Clintons are grooming Chelsea to run for something, senator from New York, to keep that dynasty as it is, is going.

Now, I’m under no illusions here, but I think his point about people needing to get a spine and stick with it, that Trump’s only been at it two months,is true. It’s just I think the root of this, if there is one, and the attitudinal route, tell me if any part of this is accurate where you are concerned. The euphoria on election night and the immediate aftermath was so great because it was so surprising, so unexpected. I mean, some of you I’m sure thought Trump was gonna win. I did.

The Democrats were just getting up to speed on this collusion story between Trump and the Russians. They had to go into action quick on that because the day of the election and every day prior they thought they were gonna win. There wasn’t any collusion with Trump and the Russians. They were gonna have a big celebration. So they had to manufacture a reason for their loss. And I’ve had a couple people tell me that they’re shocked that Trump doesn’t have more support in Washington now. They’re surprised that there is so much rancor and partisanship in the country.

There is a belief that after Trump won, if Trump won, and after he won, that some people would come together, realize the election’s over and that there wouldn’t be this much rancor, there wouldn’t be this much partisanship. And so that has turned into disappointment from what was an excited euphoria. And then of course the daily assault and effort here to take Trump out, to eventually get him out of office and so forth has led people to some degree of frustration. I don’t know if that fits you.

But in the meantime, while all of this is going on, all this perception-creating is happening, Trump is actually achieving quite a lot. He has actually already fulfilled a whole bunch of campaign promises. The economy is doing great. Jobs, real jobs are being created. American companies are announcing they’re gonna reopen factories here. The coal industry is coming back to life because of what Trump did today. And for his part, you know, Trump seems aware. He tweets about the failing New York Times and how the media’s being unfair and all that.

But as far as Trump is concerned, he just gets up every day and goes to work and is trying to keep making his promises and advancing his agenda and so forth. And there just isn’t any acknowledgment of it in places I guess people want to see it. But the Democrat are continuing to lose. You know, McConnell came out the other day and said, guaranteed that Neil Gorsuch will be confirmed on April 7th. Do you realize the Democrats in the Senate might have trouble blocking him? 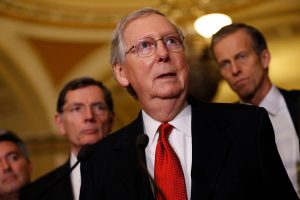 Everybody assumes that McConnell is going to have to do the nuclear option in order to get Gorsuch confirmed because everybody assumes that the Democrats are gonna be full-fledged united behind, there already some breaks in that armor. Joe Manchin is one, and there might be a couple of others who are gonna end up voting for Gorsuch. It has to be the case because McConnell is not the kind of guy to go out making guarantees like this unless he’s relatively certain that they’re gonna happen.

Then the health care fiasco happened. I understand how that could deflate a lot of people. That was a fiasco. I don’t think it’s gonna be as bad as I originally thought last Friday, but I thought that had the potential to derail everything. I don’t think I was as forthcoming with you as I could have been, because I don’t want to complain. I’m not gonna join that chorus. I’m just gonna bide my time and wait. But my instinctive reaction was this is not good. This is gonna embolden the Democrats. This is gonna invigorate ’em. It’s gonna create renewed energy, and they’re gonna ratchet up opposition even more.

And now I’m thinking, not that bad. It is an opportunity to make it better, and I’ll tell you, the arguments in that law, everybody acknowledged that it was not optimum, everybody acknowledged that it was very wanting in number of places, but the prevailing opinion seemed to be you gotta do it, half a loaf better than none, you gotta at least get something done because it’s gonna change when it gets to the Senate, you gotta get something on paper, get something done so progress can start.