Here’s Amy, we head back to the phones, Amy, Colorado Springs, welcome to the EIB Network. Hi.

CALLER: Hi, Rush. Such an honor to speak with you. Just a quick comment about Koppel’s interview with Hannity and how he thought that talk radio was bad for America.

CALLER: And I have to tell you, I grew up a Rush Baby. I listened to Rush, to you, all the time with my dad in the car, one of my favorite memories with him. And I don’t see how conservatism, how the Constitution can be bad for our country. The kids in school now, I have a little 10-year-old, and they just don’t learn what I used to learn, what they need to learn about our country. And so I thank you every day for what you do.

RUSH: Thank you. First off, have you gotten for your kid the Rush Revere Time-Travel Adventures with Exceptional Americans book series on American history?

CALLER: No, I haven’t. I’ve been meaning to look it up on Amazon.

RUSH: Okay, you hang on here ’cause I’m gonna send you a set. You have a 10-year-old you said?

RUSH: Perfect. Absolutely perfect. These books are written specifically for the circumstance you just described. Your kids are not learning what you did about America.

CALLER: Well, thank you so much, Rush.

RUSH: Your child, if your child is like many who’ve read these books, they’re gonna love reading them, because the books use time travel and a talking horse to take the reader back to these great moments in American history and immerse them there. It’s not just these events recited and you learn them with memorization, but the reader is actually taken there and is part of the story, with other students at a school that time travel with the teacher, which is Rush Revere.

So it’s been wonderful. It’s exceeded our desires and our hopes and our expectations. We’ve got an entire Facebook page and website for Rush Revere, and it’s great. So let me send you those five books first. So don’t hang up when we’re finished. Now, your question is just drenched in common sense. What in the world is un-American about conservatism? How can Ted Koppel, how can any of these people say that believing in conservatism is bad for America? Here’s what he means. And he’s not alone. This is what they all mean. 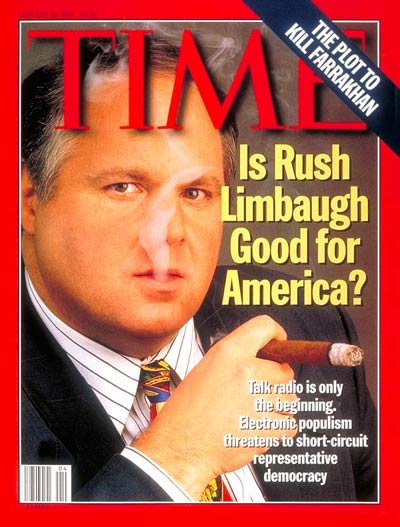 In 1995, Amy, TIME magazine ran a cover story with me on the cover, “Is Rush Limbaugh bad for America?” This has been a theme of the media since this program began in 1988. And the key to understanding this is what Ted Koppel told Sean. Sean said, “You think I’m bad for America?” And Koppel said, “Yeah, because what you’ve done, you attract people who think ideology is more important than fact.”

Now, when I say that to you, Amy, let me just run a little test here. Ted Koppel says, “Yes, you people in talk radio are the problem because you attract people to whom ideology means more than facts.” How would you interpret that? What do you think he means by that? There’s no wrong answer. It’s not a test. I’m just curious how you react when you hear that?

CALLER: I think what he means is that, you know, people on the right are just misled easily without facts, so, you know, it’s easy to push an ideology on us, people like me that are listening without backing it up. And that’s wrong, because that’s what the liberal media does every single day.

RUSH: Yeah, see, you’re really close. You’re so close there’s no space. Here’s what he means. In Ted Koppel’s world, liberalism is not an ideology. Liberalism is simply the way normal people think and act. There’s no ideology to it. They are pure. It is as natural as air and water. Conservatism, to them, is abnormal, perverse, perverted, unnatural, and is not based in any fact, because if it were, conservatism wouldn’t exist.

Now, this construction that they have, you have to understand, liberals believe that reality is something that you and me make up to leave them out of it. They think that conservatism is unnatural and perverted, that they are normal and natural. And what he means is is that they, on the left, they simply tell you the facts of things and they tell you the truth of things, and what we do, we don’t tell you any of that. We just preach conservatism to you, and your loyalty is to conservatism and principle, not fact, and therefore they think we are miseducating you, maleducating.

We are not telling you the truth about things because we need you to be conservative. It’s all rooted in the fact that they don’t think liberalism is an ideology and therefore they don’t see any competition here. They just see a sickness and a perversion that people like me and Hannity are responsible for. Whereas you know, the truth of the matter is that on this program — Koppel also said that these programs don’t present both sides, only one side of things. Not true.

In explaining everything, I explain the liberal thinking on everything better than the liberals do. I explain it more honestly than they do. People like you who listen to this program understand liberalism and the liberal take on any issue much better than they do from the Drive-By Media or any other, because those people lie about what they believe. Those people don’t tell you the full truth about what they believe. Obama did not tell you your premiums are gonna rise. Obama did not tell you you were gonna lose your doctor. He told you the exact opposite. 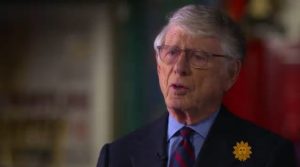 Obama does not tell you anything that he really intended to do, or he wouldn’t have gotten elected. They don’t think that’s an ideology. They think that’s just fact because people are dumb and stupid and have to be led because people are incapable of living their own lives and making their own minds up. We don’t think that. We think you’re perfectly fine. We love you to make up your own mind, make your own judgments, because we trust you. It’s contra everything they believe.

So we constitute a threat because what we actually do is blow holes through their facts, and we illustrate how their facts are largely a bunch of lies, in many cases. And that’s what he’s upset about. And you instinctively know this. You’re not here because ideology; you’re not listening to me because I’m conservative. You’re listening to me because you think what happens here is the truth. You hear the truth about liberalism, whatever the issue is. If it’s Obamacare, if it is tax cuts, whatever the issue is, I deconstruct the liberal thinking on it.

Climate change. They lie to you about it. They lie to you about every aspect. They make up this thing called a consensus of scientists. I tell you why they think what they think, what they don’t think, I tell you why they feel what they feel, what they’re trying to accomplish with this, which is what they try to accomplish with everything: more control over as many people as they can. And you, I’m sure, listen to this program ’cause, A, it’s entertaining and informative, and B, you actually do have what you believe affirmed here, but at the same time you learn why you’re conservative.