NFL Moves Raiders to Strip Club Capitol of the World

RUSH: So we mentioned this yesterday. Didn’t talk about it in much detail because it was just announced. The Raiders moving to Las Vegas. You know, there’s a thing called location fee that the moving owner has to pay to the other league owners. Do you know what this location is gonna end up being for Mark Davis who owns the Raiders? He’s gonna have to pay every other owner $11 million. 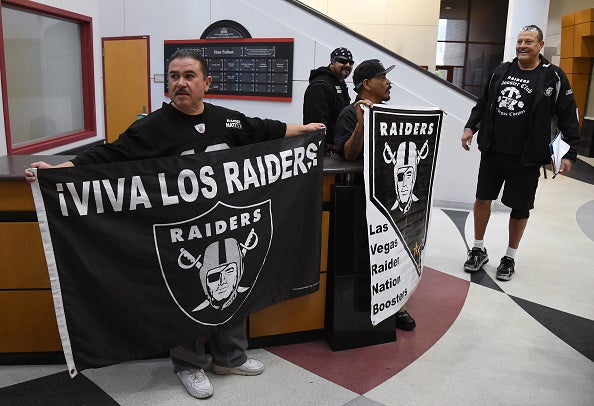 The St. Louis Rams had a huge relocation fee when they abandoned the St. Louis market for Los Angeles. When you have it explained to you what the purpose of the location fee is, it’s about, okay, this owner’s going from a small market to a large market. We are allowing it to happen, so a he’s gonna share with us some of the increased revenue moving to a bigger market gets. That’s part of it. Los Angeles much larger market than St. Louis, for example. Now, Oakland, Vegas — something to that. But $11 million for each owner, at least that’s the latest calculation, it’s not chump change.

Plus Vegas is gonna contribute $750 million to a stadium, which they hope to have completed in 2019 or 2020. So the Raiders announced yesterday they’re gonna move to Vegas in two or three years while at the same time urging fans to come out and support us in Oakland while you have a chance. I want to see how that’s gonna — there’s another thing here too. NFL TV ratings were down 9% last year, despite the rebound during the playoffs, NFL ratings down for the first time in a long time.

But beyond that, let me ask a question. In one year, maybe say two if you want to — it’s actually one year, but you got three teams relocate. You have St. Louis Rams moving to Los Angeles, San Diego Chargers — and the way to put this, St. Louis Rams abandon St. Louis, the San Diego Chargers leave San Diego, and now the Oakland Raiders leave Oakland.
In the case of San Diego and Oakland, two-storied, multidecade NFL franchises pulling up roots in the midst of TV ratings being down. What does this say about the game’s overall popularity if these owners are being forced to move ’cause in Oakland they can’t get a new stadium built that will generate the revenue that say they can generate in Texas or in New York or with new stadiums such as in Atlanta or wherever.

But what about the fan base? It is not the fans’ fault that there’s not a new stadium built in Oakland. But it’s the fans of the Oakland Raiders. And this is the second time they’ve been dropped at the altar. Al Davis moved to LA once, then back to Oakland. San Diego stadium issue, problem. You know how they got it in Vegas? Hotel tax. The people that visit Vegas are gonna be paying for the Las Vegas Raiders stadium in part. 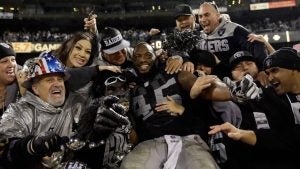 But then there’s this. In addition to the abandonment of three markets, does that happen in leagues that are overwhelmingly loved and popular? Now you’re gonna have 21- to 28- to 33-year-old young men — married or single, doesn’t matter — they’re gonna have six months a year off, six months a year on working in Las Vegas with strippers, strip clubs, gambling, adult beverages. Is the Las Vegas team gonna be able to field a team every Sunday?

RUSH: It’s also gonna be interesting to see starting in 2019, 2020 when the Raiders move to Las Vegas, to see if NFL players on the Vegas team could go bankrupt faster than the usual NFL players in other markets. There will be a number of different, shall we say, metrics that we can use to gauge whether or not the move — imagine the visiting teams going into Las Vegas. Take your average — (interruption) Take who? What team has the most arrested players on it? Take them to Vegas the Saturday night before the game.

No, it might be Cincinnati. I think it’s always gonna be Cincinnati. Maybe not lately, but league average Cincinnati has the most arrested players, most players serving jail time in the off-season. Anyway, take your pick. I mean, you want to say the Giants, I don’t know, but take your average NFL team to Vegas as the road team, road teams always go in on the night, the day before the game, but teams on the East Coast when traveling to the western time zones sometimes leave on Friday to adjust to it. And the players are obviously going to be lobbying for this. So you have maybe two nights if you’re the Patriots, but Belichick will have them under lock and chain, but the Jets, the fish — ah, the fish have South Beach. I mean, they’re used this, the Dolphins.

So you put your average team in a road game, Friday night, Saturday night, a game on Sunday, they’re overnight, two nights in Las Vegas. These are young guys that have more money than they’ve ever dreamed of having in their lives. Coaches and management, “I can’t tell my players what to think or what to do.” That’s the reaction to Kaepernick. I mean it’s the Millennial generation. You don’t tell ’em what to do now. It’s not like football coaches in the old days ran boot camps, or do that anymore.

But the NFL, there was a time the NFL, “No way. We’re not even gonna let you fly over Los Vegas on your way to Oakland or Seattle,” such is the stench of gambling there. Now they’re gonna have a team located in the legal gambling capital of the United States, the legal strip club capital of the United States. This may do wonders for NFL ratings, the stuff that happens off the field. The stuff that makes the news before the game’s even played. Well, then add to the drama of what happens on the field after all this off-field stuff, which is gonna happen. It’s guaranteed.