RUSH: Here is Miriam in West Palm Beach. Miriam, one of my all-time top ten favorite female names, and you’re the first Miriam that I’ve heard from in a long time, so it’s great to have you here.

CALLER: Rush, what an honor to speak with you. I was just calling you to inform you that last night the city commission named our town, the City of West Palm Beach, a sanctuary city.

RUSH: Yeah, you know, I’d heard about that, city of West Palm Beach, which many of us have to drive through to get to where we’re going, has in fact named itself a sanctuary city. This is a liberal anger reaction to the Trump administration. It’s one of defiance. They’re openly asking people, inviting people to violate the law. They are violating the law, and they are daring the Department of Justice and the immigration services to react to them.

CALLER: They sure are. I mean, they’re calling it the welcoming city. That’s what they call it. 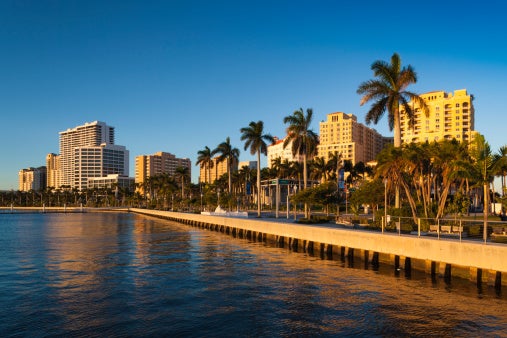 RUSH: Was the public allowed to comment on this?

CALLER: I don’t think that, there was not a lot of, you know, news out there about it, but there was a group of us that were there opposing this designation.

CALLER: But I didn’t speak.

RUSH: They were gonna pass this anyway. Who is the mayor of West Palm Beach? Who is it now?

RUSH: Yeah, it used to be Lois Frankel. The city was a lot more fun when Lois Frankel was mayor. It was screwy, it was crazy, it was wacko leftists, but at least you could run into her. At dinner she’d follow you into Sprinkles, you know, get ice cream. What are you gonna do? It’s just another reason not to stop as you’re driving through. I’m joking about that. But seriously, this is a bunch of leftists and a bunch of Democrats trying to react in a show of defiance, and it’s social protest and so forth based in compassion and humanity.

You know, let me ask you people a question, seriously. Miriam, thanks for the call. In terms of having America be great. And I’m not playing off Trump. I’m talking about we all want the United States to be what it became, the greatest nation on earth, and primarily because of our founding documents and the acknowledgement in our founding documents that we are free and the acknowledgment that that freedom is part of our creation by God, that it is not because of a decree from human beings.

Our freedom doesn’t come from any individual or group of individuals proclaiming we’re free; we’re born that way. It’s established in our founding documents. The United States became the greatest nation on earth in any way you want to measure greatness: economic output, freedom, creativity, happiness, pursuit of happiness, contentment. There was nowhere close. There was nothing like the United States ever. There still isn’t in many regards.

Now, the pro-illegal immigration group will tell you, “We are a nation of immigrants, and we are a melting pot, and our greatness lies in our diversity, and our greatness, therefore, is insured by all of this illegal immigration.” How many of you agree with that? Forget the law for a minute. Do you believe that massive numbers of people coming to this country, legally or illegally, contribute to America’s greatness?

See, I happen to not believe that. The left wants you to believe that the United States does not have a cornered market on making nations great, that we kind of stumbled into it and in many cases our greatness is because we’ve so mistreated many people around the world. Our greatness is not just and earned and that it really isn’t greatness, that we’re imperialistic, that we’ve stolen all the things we have from other people around the world. And that’s one of the reasons we need to let ’em all back in because it’s really theirs and we’ve stolen from ’em, and they want an opportunity to reclaim what was once theirs. Kind of like the rich getting rich by stealing from the poor.

The math doesn’t work out, but the Democrats still live by it. And of course it’s bogus. Diversity in the Democrats’ definition is skin color, sexual orientation, and gender. And the more diverse all of that is, the so-called greater the country is. Bogus. But the left and the Democrat Party, aside from their desires to register these people to vote which is really, really what this is all about. In their attempt to sell it, do try to tell people that this is how we became great. America is a nation of immigrants. What they want you to believe, it’s a nation of illegal immigrants, and that the illegal immigrants are actually indicative of the future of this country. How many of you people believe in that in principle?