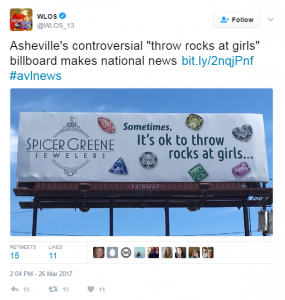 And the billboard says, “Sometimes, it’s ok to throw rocks at girls…”

You heard about this? This has created a firestorm controversy. They’ve had to take the billboard down because the billboard is said to be promoting violence against women. Can you imagine? When I worked in Sacramento one of the greatest all-time billboards in the history of billboards, KFBK Sacramento, 1530 AM, and the billboard was a picture of a car radio with push buttons and the AM dial. It was a close-up of the dial, and there was a hand with a finger moving to punch one of the buttons.

And the billboard said, “Wouldn’t you just love to punch Rush Limbaugh?” One of the greatest billboards of all time. Nobody wanted it taken down except because it was promoting me, but nobody thought it was promoting violence besides it was violence again me, which was permissible.

It was a liberal advertising agency that created it. And it was one of a series of three. 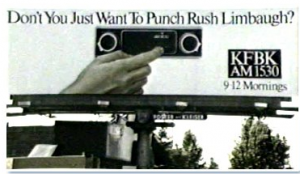 I said, “No. That is as creative as it can be.” I loved it all. And this: “Sometimes, it’s ok to throw rocks at girls”? Spicer Greene Jewelers, welcome to political correctness 2017.