If Democrats Work with Trump It Will Be to Advance Their Agenda, Not His

RUSH: Okay. I want to go back to the first half hour of the program today where I announced to you a possible scenario involving the president working with Democrats, since he can’t get anything done with Republicans. If you missed it, I may recap it. It’s not something I’m predicting yet. It’s a likely scenario. It’s possible that it could happen on a few issues.

We’re talking about people who are trying to via innuendo and leak and media assassination, we’re dealing with people that are trying to destroy Donald Trump and his press secretary just signaled that they are serious about reaching out to these people to try to get certain things done, legislatively, like infrastructure or tax reform. I can’t see the Democrats working with Trump on tax reform unless the rich get soaked.

The thing about this that should be worrisome is that if this alliance happens, if they’re not bluffing, if they’re serious, and if my scenario gets close, it’s not gonna be the Democrats adopting Trump’s agenda. It’s gonna be the other way around. Depending on what all Trump can do with The Art of the Deal and persuasion to bring ’em around.

Here’s Jane in Oakton, Virginia. I’m glad you waited. It’s great to have you on the program. How are you?

CALLER: Oh, Rush, I’m fine. Thank you so much for taking my call.

CALLER: It is such an honor. I can only say I’ve been listening to you for 25 years, and one year during Lent I tried to give up listening to you for Lent, and it didn’t work out too good for me, so I am so thrilled to talk to you. I’ve only known you to be wrong one time, Rush, in all these years, and that was about Hillary and running for the Senate, but when you mentioned earlier that you thought that the Democrats would even — if Trump reaches out to them like he suggested he was going to and the Democrats, you suggested that they might work with him, I don’t see any way that they would ever do anything at all to try to facilitate Donald Trump’s agenda in any way.

RUSH: I didn’t say that.

CALLER: You know, right now I just listen to you, and I guess you didn’t say that, but earlier today I did think that you had said that —

RUSH: Oh, no, I did say that. I did not say that the Democrats would help Trump with his agenda. I said they might work with him, but it’ll only be to advance theirs. Not his.

CALLER: Well, okay. See? Okay. Well, only one time have I ever known you to be wrong. I misheard you. I thought that you suggested that they might work with him to — 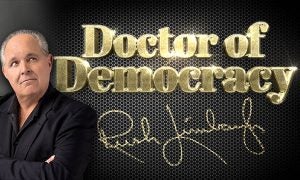 RUSH: No. You know what? In your favor, I can understand the way I explained it, I could understand how you might have thought that I meant that Trump would turn to the Democrats with his agenda and seek some assistance. I can totally understand how you got that impression. My point all along was that Trump’s been telegraphing it. From Reuters: “White House looks past conservatives on tax reform to Democrats,” and so forth, and some other things, even the Obamacare repeal and replace. Nobody wants what’s currently in place to remain, so there’s gonna have to be something done on it at some point.

But my point, the danger on this is twofold. It’s not just that the president gives up on the Republicans, but if he goes to the Democrats, it’s not gonna be because they cave and help him advance his agenda. Their base would abandon them. This lunatic fringe base would switch from assassinating Trump to assassinating Schumer and Pelosi. Can’t have that. But the bottom line of it, if any of that happens, forget which, if any of that happens, guess who’s left alone out there as the obstructors? That would be the Republicans in the House. I can see how this could be set up if that were what somebody wanted to happen. It’s a real possibility. But I didn’t mean they’re gonna help him with his agenda.

CALLER: Right. Right. I just think they will oppose him. Anything that Trump has agreed with the conservative movement with, I think obviously they will do anything at all to undermine and to thwart that.

RUSH: Okay, true. Granted. But tell me where the conservatism is in a trillion-dollar infrastructure bill.

RUSH: You don’t think Chuck Schumer would be chomping at the bit to get his fingers in on that? The president calls him, “Hey, Chuck, I got a trillion dollars I want to allocate to roads and bridges. Can I get your help?” And Schumer’d say, “My God, you picked the issue right out of our back pocket. Of course we’ll help you accomplish what we have always wanted, infrastructure reform.” There’s nothing conservative about that, a government growing by a trillion dollars?

CALLER: Oh. I’m sorry. The whole thing went out for a second. I thought that I had lost you.

RUSH: No matter what happens to your phone connection, I will always be here.

CALLER: Rush Limbaugh, I will love you ’til the day I die.

RUSH: And it’s both ways, I guarantee. Jane, thank you so much. I appreciate it. I was thinking about how I portrayed this likely or possible scenario. The point I wanted to make when I thought I did, maybe I didn’t lead early enough with it, is that should this cross-pollination happen, folks, it’s so easy to see after this debacle on Friday, Republicans can’t get anything done, Trump’s still not through his first hundred days, wants to get things done.

If the Republicans can’t find a way, where’s he gonna go? It’s easy to see how he would join the Democrats, for a host of reasons, not the least of which would be teaching the Republicans a lesson or what have you. But that’s the great — well, there’s more than one great danger in it. The real problem with it is, it’s not gonna be Trump’s agenda that the Democrats help or assist with, or he’s not gonna get it. It’s gonna have to be something that they can say they’ve always wanted to be a part of anyway, like infrastructure spending.