RUSH: Here’s Robert in Dallas as we head back to the phones. Robert, welcome. Great to have you here, sir.

CALLER: You know, Rush, I have so much respect for the vice president, but after just listening to your interview with him, you know, he basically just told us all that they’re not gonna repeal Obamacare with phase 1. They’re gonna do some changes to it and make it better, but they’re not gonna repeal it. And my problem with all this is, to me, this is just a bad bill from the get-go.

I mean, phase 2, even if Tom Price makes some changes, what’s gonna keep the next HHS secretary who’s a Democrat from just going in and changing it back and having that same fight again. Phase 3 is a pipe dream. You tell me the Democrat that’s gonna vote for any one thing that they’re talking about in phase 3, much less all of them.

And the vice president just got through saying, “Well, the president’s gonna get this done in the spring.” Well, hell, it’s March 22nd. Why are we waiting doing something now and doing something in three or four weeks from now? To me it’s just the same old last seven years of the Republicans where it’s always the Democrats that keep from us doing what you wanted. And I will say this, Rush. I have respect for the Democrats, because if they were in charge they’d get their stuff done. They passed everything they wanted through reconciliation. They didn’t wait around for this or that. So to me it’s just the same old stuff from the Republicans.

RUSH: I hear you. You know, Rand Paul is out there saying that he thinks the bill’s gonna be pulled. Now, he said this yesterday, and this thing is changing so fast that he may have changed his mind, but he says once they realize this thing can’t pass, that they’re gonna pull it, and then when they pull it they’re gonna go back and redo it, and that’s when Rand Paul says do it right.

Look, I agree with you to this extent, that you gotta get government out of health care. That’s what people don’t want, the government involved in health care. Just repeal this. And Tom Cotton, the Senator from Arkansas, said it like you did just now, it’s a pipe dream to think there’s gonna be a phase 2 and phase 3. But look, I can’t argue with you about the Republicans and their methodology and in many cases their motivation.

Like you point out, the Democrats — remember, we didn’t have the votes to stop them no matter what they did, although they might not have been able to get 60 votes in the Senate, so you’re right, they did reconciliation for everything, so we allow ourselves to be handcuffed by saying, “Well, we can only use reconciliation to get rid of some of it,” and your point is, “We run the show, we won. Let’s just nuke the thing. What’s the big deal?”

I know a lot of people agree with you. But I think what’s driving this is the belief on the Republican side that the American people want something done with Obamacare, and they want it done now. And so this is doing something about Obamacare. And a lot of people are gonna claim victory after this, Robert.

CALLER: But, Rush, phase 1 doesn’t do anything to lower the cost of health care, I mean, not specifically, because it does not address preexisting conditions. I mean, isn’t that what’s driving health care so high? I mean, hell, wouldn’t it be great if my house caught on fire and I called somebody and said I need some homeowners?

RUSH: Let me tell you something. You might not want to hear it. I don’t care if they nuked Obamacare, if they took every weapon they’ve got and blew it up, preexisting conditions is the cockroach that survives every attempt to destroy it. There is not a single person that’s gonna vote against preexisting conditions be covered, dealt with, or what have you.

It’s almost like the Holy Grail. It’s almost like the third rail. It’s almost become like Social Security in that regard. That’s my point, okay, if that’s the objective — we got two objectives, right? Insure the uninsured and take care of people who are already sick who can’t afford it. Do that! Just do those two things. You’re dealing with maybe 20 million people. You could do it for far less than what this costs. And then go fix the health business and the health insurance business, using markets and the private sector to do it for the most part.

I have always thought all of this was a big leap. And we know why the Democrats do it. You know, every time I mention this, it ends up being misquoted. You take a look at any totalitarian Regime in the modern era — and by modern, I’m talking about Mao, the Nazis, the National Socialist Party, even look at Cuba. The first thing that national socialists do is establish a nationwide health care plan. Why? It’s easily sellable because everybody gets sick. So you make grandiose promises about treating everybody who gets sick and covering every catastrophe as only the government has the money to do, yada yada yada yada.

But the reason they the want is because that one area, health care, including health insurance, is the single biggest one thing you can do to exercise the most control over your population. If you link people’s access to doctors, nurses, and medicine, to them behaving the way you want them to, they will behave the way you want them to. If you tell them that they can only have a doctor, nurse, hospitalization if they eat certain things or if they drive a certain thing, whatever you want them to do, you own them. And that’s why totalitarians and tyrants all make a big deal out of health care, even Cuba. 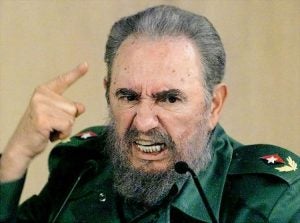 It’s a joke that there’s health care in Cuba, but look at how well the propaganda’s worked. “It’s the best health care in the world.” It’s absurd. Michael Moore makes a stupid movie about it. The second sweeping thing that governments can do to end up controlling their populations and insuring perpetual power is something like climate change.

Climate change, as an issue, contains pretty much everything leftists salivate over, in terms of controlling people, making people responsible for disasters and calamities, offering them chance to repent, offering them salvation, and then exempting them from the blame that you have foisted on them, and then guaranteeing them clean water and clean air.

Obamacare, national health care, and climate. This is why I am so radically opposed to all of them is because those two things together get a totalitarian 90% of the way where he wants to end up being. Climate change contains so much of liberalism, so much of the socialist dream, it’s got everything. It’s got human behavior. It’s got blame. It’s got salvation. It’s got people whose lives don’t mean anything. You can tell ’em they’re saving the planet.

It’s got tax increases, it grows government, people willingly support growing government in order to make sure everybody gets to go to the hospital and the doctor and that the climate’s not destroying the planet! And they’ll sign up for that as fast as you can give ’em the forms. And that’s why, folks, I am probably gotten to the point of irritating you on some days talking about climate change so much, because of how dastardly it is. And the same thing with national socialized health care.