RUSH: By the way, the Gorsuch hearings began today too. The Democrats have two soap operas going today. They’ve got the destroy Trump soap opera and the effort here on Gorsuch, who is the Supreme Court nominee, and this is somewhat interesting, ladies and gentlemen. This is from the… What is this? Well, I’m not sure the source of this, but the story is this. There’s a backup story on NPR. It’s a legitimate story. I just can’t find — in the small font here — the actual source here. But a group of 11 female former law clerks for Neil Gorsuch have submitted a letter to the Senate Judiciary Committee in support of the nominee. Wait. That’s happened, but that’s not… Here. This is the headline I’m looking for. I’m sorry, folks. I’ve got so damn many things happening here at once, and it’s an ongoing organizational problem.

“Former Law Student: Gorsuch Told Class Women ‘Manipulate’ Maternity Leave.” Now, the big news here, New York Magazine is reporting that a former student says that Judge Gorsuch told them that women manipulate maternity benefits. So it’s being set up here that Gorsuch is not for females, that he might be a misogynist, that he’s prejudiced against women because he’s out there saying that women manipulate maternity leave for maternity benefits — which, I mean, here we go again. (sigh) The truth is that people manipulate benefits of all kinds. 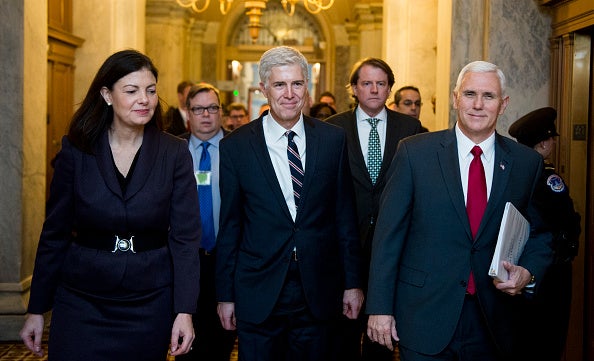 And the argument that maternity benefits are somehow the only form of benefit not subject to that behavior is absurd. But it’s the person that’s responsible for this that’s interesting. The quoted former student of Gorsuch identified by the New York Daily News’s Jennifer Sisk, who graduated from University of Colorado law school last year. She is a former operative for Democrat Mark Udall. She went to college in Massachusetts at Wellesley and then worked as an aide in Mark Udall’s Senate office in Washington.

And that part of the story is not part of the New York Magazine story. She’s just identified as a struggling student. (impression) She’s a student of Gorsuch’s who just wanted to become a good lawyer, and she’s shocked and disturbed and disappointed and saddened and frightened and scared because this nominee actually said that women manipulate maternity benefits!” And therefore he’s not suitable. He’s not suitable if he thinks women manipulate things. (laughing) Is that news? (laughing) But doesn’t matter. Reality is never on the table when it comes to the Democrat Party here.

And then Dianne Feinstein, I did not see it but apparently her opening statement was scorched earth. Now, I… You know, I’ve been reading all this stuff ever since Gorsuch was nominated. I’ve been reading it in all of the intellectual blogs and everywhere about how he’s a slam dunk. “This guy is unassailable! He’s gonna sail through. It’s not gonna take very long because this guy simply has a record that nobody can oppose.” And we’ve been told the Democrats know this, they’re gonna save their powder, keep it dry for the next nominee. And I said, “Just you wait.” What more do you need see to understand that the Democrats are gonna resist and oppose virtually everything Trump does?

RUSH: Yeah, waiting for Anita Hill to show up in the Gorsuch hearings. That’ll take two or three days.