Thomas B. Edsall on the Decline of Men

RUSH: We go to my adopted hometown, Sacramento, California. This is Robbie. Great to have you. How you doing? 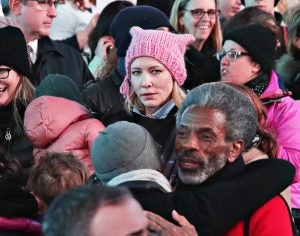 RUSH: They don’t want a level playing field at all. And your point, I have to tell you, that is brilliant. That is the kind of analogy that everybody can understand. I really applaud you. The only problem with it is that the women you’re talking about already think men are pigs.

RUSH: But that is an excellent point. Can you imagine if some guy — let’s say, take your pick, Mel Gibson. Let’s pick an actor, Mel Gibson, who they already hate, right?

RUSH: Or Schwarzenegger. Have Arnie go out there, “I will be back. My moral center is in my penis!” Can you imagine what they would say?

CALLER: It would be so offensive. But a woman can say it and it’s fine and people applaud it.

RUSH: I know. It is an incredible double standard. You know, you have reminded me. I’ve got another story here. It’s in a portion of the Stack here that if I need it, I’ll get to it. It’s not something that I had front and center. But since you’ve called, it’s a story in the New York Times. It’s a column by Thomas B. Edsall. Now, Thomas B. Edsall is a political columnist, and this is the guy who wrote in the Times in November of 2011 how the Democrats were going to be abandon white working men as a voting bloc. That’s who this guy is. Robbie, thanks for the call. What part of Sacramento do you live in?

CALLER: I live out near Elk Grove.

CALLER: There is a very large one.

RUSH: Absolutely. Okay. How long have you lived there?

CALLER: I have the lived here all my life. Well, since I was three, and I’ve been listening to you since the 1980s.

RUSH: That makes you a lifer.

CALLER: Yeah, I am a lifer!

RUSH: I started there, it was October of 1984, and that was my break. Sacramento, California, was my professional break.

CALLER: Well, part of the reason I’m able to think and articulate the things that I can is because I’ve been a student of yours for so long. So thank you for your teaching.

RUSH: Well, God bless you. Thank you. I never take any of that for granted. I really appreciate it. Thank you, Robbie. This piece, Thomas B. Edsall, is entitled, “The Increasing Significance of the Decline of Men.” In other words, this decline in men ain’t a good thing. And I, frankly, was stunned to see that this appeared in the New York Times by a writer who is a card-carrying leftist.

So I said, okay, what’s this? There’s gotta be some catch to this, because this is not something the New York Times would find a problem with. The New York Times is populated by people who think not only is the United States the problem in the world, it is so because of the male population. So here is a pull quote.

“What does all this suggest? First, there are irreversible changes in the workplace, particularly the rise of jobs requiring social skills (even STEM jobs) that will continue to make it hard for men who lack those skills. Second, male children suffer more from restricted or nonexistent parental leave policies and contemporary child care arrangements, as well as from growing up in single-parent households.”

In other words, we finally got an acknowledgment here that single-parent households are maybe a problem, but primarily for the men, or the little boys, and that we need to fix this with expanded parental leave. So there’s the liberalism in this. But this piece portrays men as victims. And I just don’t think that real men consider themselves victims and don’t want to be considered victims, do not want to be victims, and don’t want to be thought of as victims.

A lot of people do want to be victims. It’s easy. It’s an excuse for not doing anything and an excuse for failing. Being a victim means somebody else is responsible for everything going wrong in your life. So Democrats love plugging as many people as they can into victim status. But here’s how it starts.

“In 2016, 95.8 percent of Fortune 500 CEOs were male and so were 348 of the Forbes 400. Of the 260 people on the Forbes list described as ‘self-made,’ 250 were men. Wealth — and the ability to generate more wealth — must still be considered a reliable proxy for power. But at the other end of the scale, men of all races and ethnicities are dropping out of the work force, abusing opioids and falling behind women in both college attendance and graduation rates. Since 2000, wage inequality has grown more among men than among women.” And there’s some stupid chart here from the Economic Policy Institute to illustrate it.

“For many men without college degrees, the scaffolding that underpinned their fathers’ lives has been torn down. David Leegee, an emeritus professor of political science at Notre Dame, wrote me by email: –” this is Thomas B. Edsall of the Times writing — “The institutions they knew to process authoritatively the economic and social changes they faced in earlier times are gone or undermined — the union, the Catholic Church, the industrial bar with co-workers,” as in go get a drink bar, “the compliant wife,” all those things that used to make men men — the union, the church, the bar with Archie Bunker sitting there, compliant women has been replaced. And what has replaced it “is an unvetted information technology that yields little truth or comfort, and nurtures anomie and anger.”

He goes on to talk about the fact that men are declining in power, in stature, and in wealth. And it’s all because all the things that made them bigots and closed-minded mind-numbed robots are gone. Well, now women standing up to ’em. That’s something that these real guys, they just can’t take it. They don’t know how to deal with it, and it’s causing them to shrink away in terms of self-image, stature, and the rest.

Anyway, it’s convoluted. To me it was a surprising thing to see in the New York Times, to even have it acknowledged, the increasing significance of the decline of men. If you want to talk about the decline of men, it is happening. Men in great numbers are not going to college. Now, I would disagree profoundly with the reasons given in this piece as to why. I think a lot of this decline of men or the withdrawal of men from various places in our culture is all due to feminism and what it has done to everybody.

Because what feminism sought to do, when you get right down to it feminism was brought to us by a bunch of angry women whose major grievance and beef was with human nature and God. And they sought to reverse, undo, change, whatever, basic human nature, things that we’re born with. And it rendered, at the peak of the movement, started in the current here, late sixties, seventies, eighties is when this thing was boomeranging. We’re still feeling the effects of it now, but it just caused everybody to be confused.

Nobody knew who they were supposed to be with the opposite sex. Everybody was turned into actors. Everybody was afraid to be who they were, particularly men, because they were taking it in every direction. Men are rapists, men are brutes, men are predators, can’t trust men with their own kids, they beat their wives, they get drunk. This was the image that was being created, chauvinist pigs and all this. And like everything else, nobody wanted to be thought of that way, so immediately men began, even subconsciously, to behave in ways that would try to indicate, “Don’t think of me like that. I’m not that.”

But when the pop culture is littered with TV shows that portray men this way and women as the never ending victims no matter how much power they acquire, no matter how much the decks are stacked in their favor politically, they’re still portrayed as weak and victims and not fairly paid and so forth. And all men want to do is get along. All this feminism garbage about the way men treat women and so forth is so much misunderstood, but it makes sense it’s misunderstood because the women responsible for this modern era of feminism themselves were unhappy over the role basic human nature had assigned them. So they set about grow change it, everybody becomes actors, nobody knows what they’re supposed to do with who, how to behave, and therefore nobody was real.

And in fact being real, actually being who you were, if you were a man back in this era, you could get fired, you can lose your kids, any number of horrible things could happen to you. Now you look at things going on, what guy wants to go to a college with a bunch Lena Dunham’s there? Why do you want to put up with that? It makes perfect sense to me that men don’t want to put up with this kind of stuff, various curriculum changes and some of the stuff you have to take like women studies in the early Amazon years, 1700 BC. BS.

Who cares about any of that? And you’ve got a professor, Catharine MacKinnon at the University of Michigan was teaching in the 1990s women in her class that all sex is rape, even the sex in marriage. And these young college female co-eds are just soaking it all up and thinking it’s gospel and it’s new and revelatory and brilliant and so forth.

What the hell do you think that’s gonna do to normal, everyday male-female relationships? And to me it makes perfect sense that men would matriculate away and out of that, wanting no part of it. Why would they? And if the way you have to get along with women is to go out and find every book that every feminist has written on rape and become a scholar in it, who wants to do that in order to have some way to relate? These kinds of things, it’s not a mystery here, not to me.