My Unpleasant Morning with Allie the Cat

RUSH: I’ll tell you, I look battle-scarred here today. I had the most unpleasant experience at home today. You know, I have my little cat, my little Abyssinian named Allie. I got Allie a little while, about six months after my previous beloved cat passed away, Punkin. 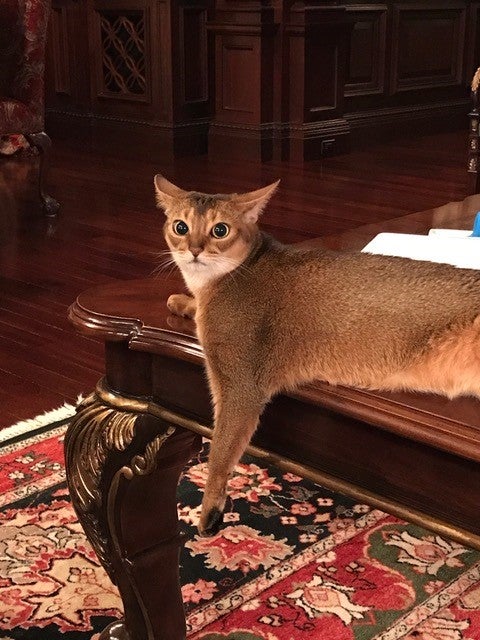 They have two completely different personalities. Whereas Punkin from one year of age was like an old lady, slow moving, totally affectionate, wherever I went the cat was there. This cat Allie is the most independent, like I thought all cats were, doesn’t give a rat’s rear end except when she wants to eat or something. She’s a lovable cat, don’t misunderstand.

But I made a mistake with this cat when she was a kitten because the place I live has many danger points for a kitten like second story balconies to jump or fall off of, nooks and crannies to get lost in. For the first, I don’t know, nine months or year the only place the cat got to go was my library where I could keep an eye on her. And it’s a big enough room as it is, and it has an upstairs and a balcony, had to close that off. I closed off the staircase so that nobody could get up there, including the cat.

Well, this meant that at the end of the night when it was time to go to bed I had to catch the cat and take her up with me. She didn’t like it and she began to hide and to hiss and to basically threaten me when I tried to pick her up because she didn’t want to be captured. But I had to do it, and this went on for nine months. And I’m afraid I have forever scarred this cat into thinking that whenever I approach, she’s gonna be captured and sent back to the zoo or something.

Well, today she had to go to the vet, the annual checkup and to get the claws clipped. I did not remove the claws this time like we did with the previous cat because I thought that was a little bit too much, plus there are dogs running around so the cat needs some defense mechanisms. They’re giant dogs. They’re sheepdogs. So it was time today, and yesterday we could not get her into the travel cage. She just ran away from the staff attempting to — she would hide in places they couldn’t get her.

So I get this note yesterday, “Look, we’ve tried for two hours, but we’re gonna need your help tomorrow,” meaning today. I said, “Aw, no. You mean I’m the one that has to catch her and end up being hated?” 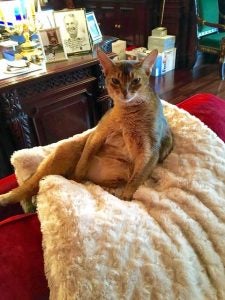 So we devised a plan. The cat every morning, when I’m in the shower, goes to a window sill in my closet and waits for me. I come out of the shower, get dressed, and then go scratch her butt and pet her. So I said, “What I’m gonna do, I’m gonna go in there and I’m gonna grab her and you run in with that cage.” We left the cage in a room overnight so she could get accustomed to it. Well, all of that went according to plan until she saw the cage. And I have got cat scratches all over my hands. That cat was hissing, the mouth was wide open, her eyes, her pupils were wide open.

I said, “This cat’s either traumatized or mad, or maybe both, at me!” So we get her in that cage. She jumped out, I mean, lickety-split. We found her after another 10 minutes, get her back in the cage, and the guy had forgotten to zip up the end and she darted out the edge of it. It took three times, three traumatized cat experiences. And, I don’t know, it’s not cruelty, because we had to take the cat to the vet to make sure she gets her annual shots, checkup and all this. 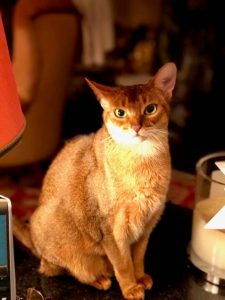 But I had Band-Aids and styptic pencils all over my hands for 20 minutes after this. I’ve never seen the cat so mad and I’m just convinced it was that first year. (interruption) Well, it’s getting worse. I mean, this is the first time this happened. Last year when we put her in the cage, I mean, she objected, but there weren’t any claws and fangs and hisses. If I would have thought about it, I would have put on a hazmat suit or some such thing.

Anyway, got her to the vet, got the claws trimmed, got the shots, she’s back home now. But man, oh, man, I’ve never seen such a traumatized pet. And this cat is treated with the greatest affection and nobody is ever mean. I’m convinced that I made the cat paranoid in that first year.