Media Has Cow Over Trump-Merkel Presser

RUSH: We have the joint press conference going on between Angela Merkel, Germany, and President Trump. And Merkel looks like she’s just been taken to the principal’s office. Well, I’ll tell you what happened there. Trump began by talking about immigration is a privilege, it’s not a right, and the safety of our citizens must always come first. He calls on all NATO allies to pay their fair share, and she’s sitting right there. Germany’s in NATO and he’s claiming we’re getting shafted and that other NATO allies must pay their fair share to the alliance.

He thanked Merkel for increasing defense spending and upping their share, which is a big deal to him, obviously. “I reiterated to Chancellor Merkel my strong support for NATO.” He said, “Our two countries must continue to work together to protect our people from radical Islamic terrorism and defeat ISIS,” with her standing right there. She’s the one that’s let 800,000 of ’em into Germany.

She said, “It is much better to speak to one another rather than about one another,” was her way of saying it’s nice to be in your company, Mr. President. She said, “Together we fight against Islamist terrorism.”

So Trump forced Merkel to use the term. Merkel then said, “We, the Germans, owe a lot to the United States of America.” Which is true. I mean, there is no denying that.

Mark Halperin got the first question, and he asked about health care. And I don’t know specifically what it was, but Trump launched into the fact that Obamacare is a disaster, that it’s failed, that it’s dying and talked about how wonderful the health care plan he’s working on now is.

Now, that was the early stages of it. I haven’t had a chance to follow much more of that, but there was a German reporter that just asked Trump about Obama wiretapping him. I didn’t get to hear the question. The commercial break ended right as the German reporter was getting to the meat of his question. I didn’t hear the answer to that. 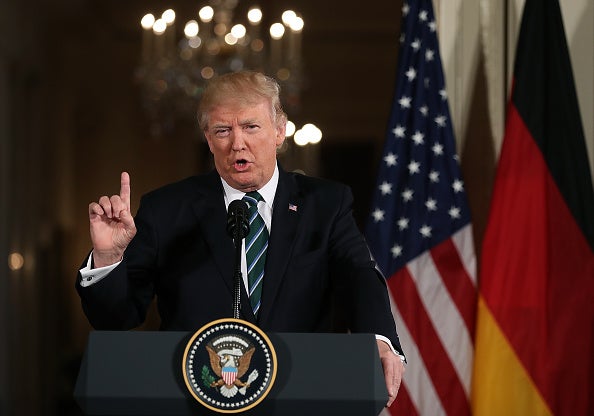 RUSH: All right. We got the sound bite here. A German reporter stands up here at the press conference, he said, “British intelligence today rejected White House claims that they unleashed wiretapping on you, Trump Tower, or members of your campaign. After these claims are rejected, what’s your take on that? Are there other suspects? Do you think it was a mistake to blame British intelligence for this? And, by the way, my the second question, are there from time to time things that you regret tweeting?” Now, that was the German reporter’s question about wiretapping. Trump said…

THE PRESIDENT: Very seldom. We have a tremendous group of people that listen and I can get around the media when the media doesn’t tell the truth so I like that. As far as wiretapping, I guess, by, you know, this past administration, at least we have something in common, perhaps. (laughter) 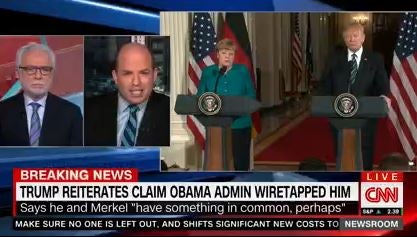 So Trump, when asked about wiretapping, turns to Angela Merkel and says, “At least we have something in common, perhaps,” because Obama wiretapped her! Her phone was monitored! Her phone was bugged by the Obama Regime. So Trump makes reference to it. That’s what the laughter in the pressroom is about.

And Little Brian Stelter over at CNN went doubly crazy talking about how stupid that made Trump look. “Well, that makes Trump look crazy,” even though Merkel was wiretapped! This is what I have meant all day long about Trump turning upside down the way all of this stuff happens in Washington.