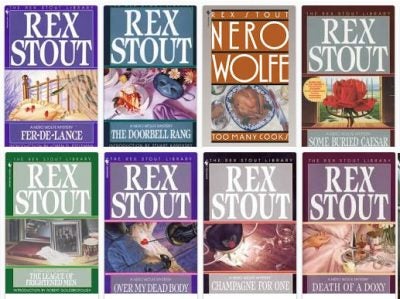 He never left home. He had a sidekick named Archie Goodwin. It’s some of the greatest writing ever. And… I mean, the author died in the seventies or early eighties, but Rex Stout’s Nero Wolfe series is great. Anyway, Nero Wolfe was from Montenegro. It was part of Yugoslavia. (interruption) It’s not landlocked, it’s a tiny little place, and they want into NATO, and so there’s an argument about whether or not they should be included in NATO, and McCain was speaking on the Senate floor during debate about this.

MCCAIN: If there is objection — and I note the senator from Kentucky on the floor, I will say before I read this: If there is objection, you are achieving the objectives of Vladimir Putin. You are achieving the objectives of trying to dismember this small country that has already been a subject of [an] attempted coup. I have no idea why anyone would object to this, except that I will say if they object, they are now carrying out the desires and ambitions of Vladimir Putin — and, yes, I do not say that lightly.

RUSH: All right. So this is McCain and he’s all day ticked off at Rand Paul because Rand Paul offered an objection and then left the floor which essentially shut down procedures on the floor for a time, and that made McCain mad. So McCain launched back at Rand Paul claiming that he is an associate of Putin, that he is furthering the desires of Putin — he’s helping the Russians — by doing what he can to keep Montenegro out of NATO.

Now, this is unhinged. I mean, this is like… This is… It’s built off the idea that Putin and Trump are buddies, and so now Putin and Rand Paul are buddies. Rand Paul reacted to this today. He said, “McCain makes a really, really strong case for term limits. I think maybe he’s past his prime. I think maybe he’s gotten a little unhinged.” That’s Rand Paul speaking of McCain. Nobody’s happy anywhere, folks. Have you noticed this? In government, in Washington, nobody’s happy about anything!