RUSH: You listen to Trump’s rally? Did you see pictures of this last night from outside? Every time Trump… He’s gonna do this every two weeks now, he says. He went to Nashville and he had a campaign rally. Of course the Drive-Bys were saying, “We’ve been there; done that. This is a campaign rally! This sounded like Trump before the election.” Some of the people said after the rally, “Well, doesn’t the president know he won? He’s still talking about things he’s gonna do. Hey, you’ve been in office 50 days. Why don’t you start talking about the things you have done?”

Well, he does that, but they lampoon it and they make fun of it. But it was not a warm day yesterday in Nashville. It was chilly. There were people who waited five hours in line outside to get in. The place was jam-packed except for portions of the upper deck, which were probably deemed to be security problems and not a good vantage point anyway. Lines of people outside. When you see a crowd like this assemble — just assembled — and then you look at the crowd as the event’s taking place, and then you look at a presidential approval number, you say, “Something doesn’t match up here.”

He’s had a couple of bumps, but it started… He had a 50%, 51%. Now he’s at 45, 46%, and maybe 40%, between 40, 45%. I haven’t seen exact number in the Fox poll. In the same poll, however, the percentage of people who think the economy’s going great and is improving is gangbusters. So it is yet another bit of polling data that is a new trend, that the economic performance of the country — the perceived economic performance, ’cause that’s all a poll on the economy is. You know, “What’s your perception of the economy? How do you think the economy is doing? Is it doing well, not doing well?” People answer. 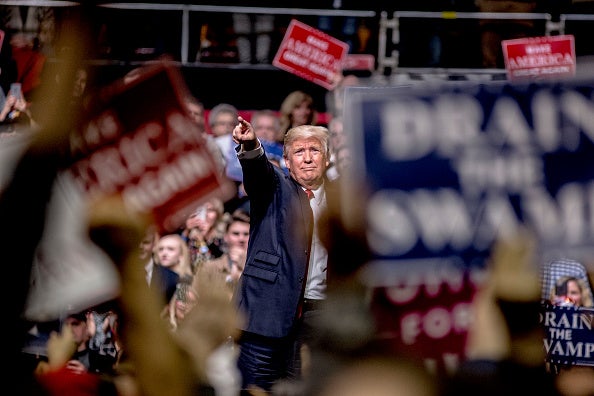 The perception of the economy is just it’s going gangbusters, and it’s up dramatically since the fourth quarter last year. But yet that does not translate into Trump’s approval numbers, so the trend of economic numbers having no impact on presidential approval is continuing, and it started with Obama. That was the first presidency in my lifetime where back-pocket issues had nothing to do with presidential approval. Obama’s always hovering around 50, 51, 48%. The economy was in the tank! Well, now in the case of Obama, I always chalked it up to — once again — the racial component, the Bradley Effect.

Or the Wilder Effect, depending on which black politician effect you wish to cite. But it’s basically a pollster shows up and asks you what you think of a black politician and you say, “Love the guy! Love the guy!” when you don’t and you don’t vote for him to avoid being tagged a racist by the pollster. So the economy with Obama was forever… If it was anything — the best it was — it was a straight line. For the most part our economy was laggard and malaise and declining and part-time jobs only and more and more people not working. This economy is burgeoning, it is expanding, it’s growing.