RUSH: You know, our old buddy Joel Rosenberg — who is now an acclaimed novelist about fictional events in the Middle East and the United States that are very closely attached to potential reality — has a new book out, and it centers on an ISIS plan to attack the U.S., Israel, and Jordan. Joel partnered with the McLaughlin group not long ago to do a massive nationwide poll of the American people and their thoughts on ISIS. 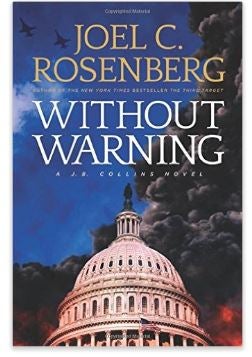 How big a threat do you think ISIS is? Are we beating ISIS? Are we even engaging ISIS? Is ISIS okay? Is ISIS bad? Are we winning? Are we losing? He called me and said, “Would you like to add a question to the survey?” And I said, “Really?” He said, “Yeah.” I said, “Okay. Ask the respondents if they fear climate change or ISIS the most.” It was a joke question! He said, “It’s a great question; I’ll put it in there,” and he did. And you know what? A majority of Americans fear climate change more than they do ISIS, according to Joel’s poll.

Ha! I think everybody that was… I mean, Joel thought I was cracking a joke when I wanted the question in there. And I said, “Joel, you’ll be surprised here. I mean, the left has been pushing this issue far more than they’ve been pushing ISIS. Climate change is considered a greater threat by a majority of Americans than is ISIS.” So Joel’s got the poll. He’s got a piece at Fox News today analyzing and reporting on the poll results.

It is designed to coincide with his new book, which was released on Tuesday. And, again, all of this is being done on the basis that there really isn’t a heightened awareness or concern or — not fear, but — an alertness to the threat that we face from Islamic jihadists, be it ISIS or Al-Qaeda or whoever. And clearly the Democrat Party and their judicial branch, they’re willing to roll the dice. They’ll do anything to stop Trump, mount the resistance, and they’ll deal with the fallout (if there is any) later. 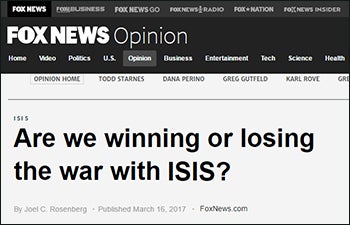 RUSH: Here’s some of the key takeaways from Joel Rosenberg’s poll: “How do Americans view the war with the Islamic State?”  You ready for this? It found 63% of liberal Americans believe “the threat of climate change is greater than the threat of Iran and ISIS obtaining weapons of mass destruction.”  Of liberal Americans, Democrats think climate change is a greater threat than Islamic terrorism.

Less than 10% of the American people believe we are engaged in a war against Islam.  That’s big, that less than 10% believe that we’re engaged in a war on Islam, because the judge claims the exact opposite. Trump’s trying to wipe Islam out, keep ’em from coming into the country and so forth.  Forty-one percent of Americans believe we’re losing the war against the Islamic State.  Twenty-five percent say they’re not sure.