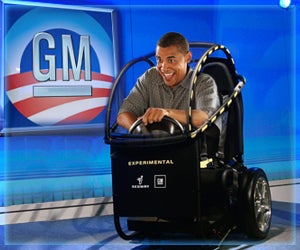 They think they’re going to die in floods and high surf because of rising sea levels. They think that hurricanes and tornadoes and earthquakes are going to kill them. But they are convinced they are going to die, and they are convinced that the Earth is no longer going to be able to support human life in another 30 years. Do not doubt me. They believe this — and the younger the leftists are, the more they believe it. This is why they all drive electric cars and love wind farms and think solar and all this gobbledygook stuff is meaningful when it isn’t.

It’s why they’re willing to go broke getting in line to drive a Tesla, ’cause they really think that kind of stuff is going to save their lives. So here comes Trump today, and he’s gonna eliminate all these pollution restrictions. He’s not gonna get rid of all of them. There are new, really strangling emissions controls on brand-new automobiles that limit creativity and innovation in the design and manufacture of automobiles.

All for the purposes of agreeing with United Nations governmental, intergovernmental, interplanetary statements and beliefs on climate change and global warming. This stuff is… It’s punitive. So the stuff specifically created to battle greenhouse gases is just gonna be reversed and done away with. And they are… I’m telling you, they’re fit to be tied. It’s gonna drive ’em even further insane. “Trump will make the announcement during a trip to Michigan, the center of the domestic auto industry. He is expected to frame the action as a way to help auto industry jobs and consumer choice.

“While automakers and congressional Republicans have pushed hard for the review and rollback, environmentalist [wackos] and consumer advocates say former President Barack Obama’s standards protect the climate while saving consumers money.” They don’t save the consumer money. They’re not designed to save the consumer money! All of this stuff is designed to cost you even more money. That’s the price you have to pay for your role in destroying the planet in the first place! That’s your penance, is agreeing to more government control and agreeing to higher prices. … So Trump’s in Ypsilanti, Michigan. This is where this is gonna be.

RUSH: Our microphones are in Ypsilanti. Trump just started his comments there. Let’s JIP a little here before we have to go to the commercial break.

THE PRESIDENT: It’s not just a motto. It’s a pledge.

RUSH: Just a bit of this.

THE PRESIDENT: It’s a pledge to the working people of this country. The era of economic surrender to the United States is over. It’s over.

THE PRESIDENT: And you see what’s already been happening. Plants are coming back, other plants that were expected to be built in other countries are not being built. I just want to tell the leaders they made some very wise decisions, very wise.

THE PRESIDENT: Some plants that were announced are not gonna be built. They’re smart. We’re going to stand up to foreign cheating. We’re going to crack down on currency manipulation.

THE PRESIDENT: And, yes, we’re going to use the full economic powers of our country to protect our workers and to protect our jobs. Let me also say how important it is for me that we have every segment of this great American industry represented in our audience today. We have everybody. To succeed as a country, we have to work together. We have to fight side by side to protect our industry and to stop the jobs from leaving our country. It’s not gonna happen anymore, folks. We’ve got to —

RUSH: So this is Donald Trump. He’s in Ypsilanti, Michigan. He’s got another rally in Nashville tonight, which is gonna be in front of a full house. In Michigan right now, he’s gonna eventually announce that he’s curtailing all of the Obama-era pollution regulations that were added to cars and their engine performance to eliminate global warming and so forth ’cause he thinks it’s a hoax and a fraud. He’s not removing all of the emissions restrictions; just the Draconian ones that Obama added under the false premise of “saving the planet from climate change.” This was scheduled to start at two o’clock and they moved it back until now. It was a smart thing to do, to delay it as long as they could.