RUSH: Thanks to Mark Steyn for sitting in yesterday, because I was away at the annual Els for Autism charity golf outing. Ernie Els, well-known PGA professional, has won a couple of majors, the U.S. Open, the British Open, which is called the Open Championship, he lives here in the South Florida area for much of the year. And he and his wife, Liezl, have an autistic son.

They have worked tirelessly the last — I guess this is five or six years — it may even be longer. I’ve played in every one of these tournaments. And the Els for Autism organization actually has a campus, and not only do they help with the aspects of autistic children, but they help the parents who have no idea what to do, no idea how to deal with this.

It’s growing, it’s expanding, and Ernie does any number of fundraising efforts throughout the year. I think this Els for Autism tournament was the first one. There are other golf tournaments around the country at different times, but this is the first one and the big one. And it’s at Old Palm, which is actually across the street from PGA National, which is where it was for the first two or three years.

And yesterday my team was, as it always is, Marvin Shanken, the publisher of Cigar Aficionado and The Wine Spectator, and Rudy Giuliani. We have been the three-man team in this tournament from the get-go. The way this tournament works is donors donate whatever it costs or however much they want in addition to that, to play with a pro.

Jack Nicklaus was out there, Bryson DeChambeau. Our pro partner was Branden Grace from South Africa. He and his wife were just fabulous. Louis Oosthuizen, Rickie Fowler, they’re all there. The pros play with the three-man teams. Yesterday we had Branden Grace. And I had the best tournament of my life in terms of golf and how I played.

I had — you ready for this? I had 11 pars which were net birdies because of the strokes and a birdie which was a net eagle, and I counted for minus 13, and this was with a three-hole stretch where I couldn’t hit the ball. A three-hole stretch where I’m hitting the ball in the water, hitting the ball on the ground, but I’m playing golf better than I ever have, and I’ve learned to correct the mistakes. And Branden Grace gave me one of the best pieces of advice. I won’t bore you with it, but it’s a swing flaw that I’ve never known why I was doing it and I learned how to correct it yesterday and did.

And it was just, man, cloud nine, getting that trophy. In fact, there’s a picture. I just sent Koko a picture of it from the Ernie Els Instagram account, that we posted. And Getty Images, they had media all over the place there because there were golf pros. And pictures of us accepting our gigantic trophies with Ernie and Liezl apparently hit the Getty wire. Koko just sent me one, so he’ll post that up at the RushLimbaugh.com website as well.

But these pros are all great. You know, the last thing in the world these guys want to do is what is their job. Playing golf is their job, and they’re all so accommodating and understandings of us hackers and they’re patient and they oftentimes offer advice. It’s just a great time for everybody involved. And the added benefit here is all of the money raised for helping people with autistic children deal with it, learn what it’s about and the autistic kids themselves.

When the tournament’s over there is a shoot-off. The pros all gather on an elevated tee box 120 yards away from a green that’s out on a lake. And if any of the pros hits a hole-in-one, that’s a million dollars to the charity. And last year Rickie Fowler did. Rickie Fowler last year hit a hole-in-one, the picture was spread around media all over the world. The roar when it happened was deafening. And this year there were additions to it.

There were so many people out there. We had galleries, they were walking around, they were taking pictures, so many nice people, so many great fans. One of the valets parking the car, when it was time for me to leave I had to go get cause the car parked next to me was too close, I couldn’t open my door. So a nice young guy, I said, “Could you go grab the keys to that car and move it so I can open –”

“Sure, Mr. Limbaugh, be happy to.” He comes out, moves the car, gets out, comes up to me, “My dad listens to you all the time. My dad never misses your show.”

And I said, “That’s great, but what about you?”

I said, “Oh, wow, you know what? ‘I’m not that old.'” I said, “Yeah, I know, but there are people your age who listen every day. You should give it a shot. Be careful, you’re gonna end up being addicted.”

I had another couple of people, Millennial age people come up to me out on the golf course, “What are we gonna do about my generation, Mr. Limbaugh? What can we do to reach ’em?” This kid was frustrated, embarrassed, as was his wife or girlfriend, about his own generation.

I said, “Look, man, I understand you. I’m a Baby Boomer and half my generation still embarrasses me to this day.” 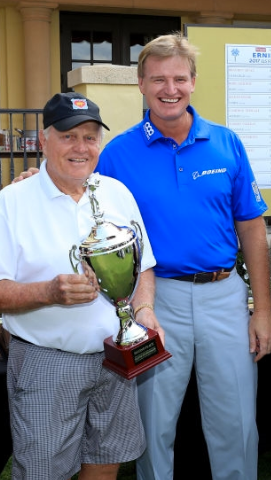 So it was a great day and the added bonus, of course, all the great things that are done for this particular charity. But, man, folks, you just don’t know. I mean, I ran into Jack Nicklaus. I’m not name-dropping here. Jack Nicklaus is on a tear to somehow reduce the distance that these pros are now hitting the ball, ’cause they can’t build golf courses long enough to tame these guys.

He said, “It’s just ridiculous. These guys hit 350-yard drives on a hole designed for a 270 or maybe 300 yards tops, and second shot… It’s all strategized the way the golf course designer built it, and these guys are just blowing ’em out.”

And so he’s pushing for the ball to be manufactured in such a way that it only goes 80, 85% as far as it does today. So I stopped him. He was coming up the steps to the barbecue after the whole thing was over, and I stopped him ’cause I had read last week that there was serious thought being given to this, and I had a couple questions. I play in a couple tournaments where the range at this course — these courses — is very small, and the practice balls on the range are dialed back. You can… I mean, they only go 75% of what any normal golf ball goes.

And the problem is you make a great swing and you just pound the ball; it doesn’t go anywhere. So you start swinging harder; it screws up your swing. So I was asking Nicklaus, “Is that something that could happen? These guys are used to bombing at 325. When they hit it only 290, 300…” “Oh, no, they’ll get used to it.” He said it’s not gonna happen, though. It’s not any time soon. I said, “Jack…” Folks, this was true. Yesterday I was bombing… I had a couple drives — wind-aided — that were close to 300 yards. 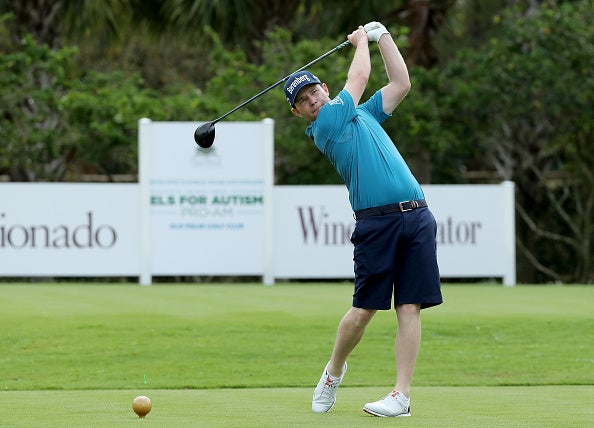 Number 18 I could… I just bombed this! I just… Pshew! I mean, it was so flushed I couldn’t even feel it when it hit the club face. And I heard Branden Grace, who was in the golf cart with Marvin Shanken. As soon as… I was the last one to hit in my tee box, and then Marvin and Rudy drive up to their tee box, and Marvin made tracks to his tee box after I hit my drive on 18. Well, I’ll just tell you, it was a 300 and… (muttering) It was a 380-yard hole, and I had 80 yards in for my second shot.

And Branden Grace said, “Whoa! Best of the day.” I’m telling Nicklaus, “Jack, I’m 66 years old and I’m hitting the ball 280, 290,” and he looked at me. He didn’t say anything, but I could tell he didn’t believe it. (chuckling) Anyway, folks, it was just… It was a wonderful, great day. The weather could not have been better. It was like a summertime day out there. It was 82; the humidity was up. It was all good. And I’ve been looking forward to telling you about it all night. You know, golf is my escape.

It’s what I do to forget everything for just three or four hours, whatever. Everybody needs that. But it’s the most frustrating game in the world ’cause it’s so hard, and the mistakes are microscopic, and if you make ’em… The mistakes… It doesn’t take much but a microscopic swing or your grip or whatever and you can totally blow it. Just… When everything clicks and works, it’s like magic. So it was just a fun day; I wanted to share it with you.