Paul Ryan Audio From Last October: I Won’t Defend Trump “Not Now, Not in the Future”

RUSH: Yeah, okay, grab sound bite number eight; have it standing by. Breitbart News has leaked something today. Headline: “Breitbart Leaks Audio of Paul Ryan Dumping on Donald Trump.” Now, this was during a conference call with Republican members in the House, Paul Ryan on October 10th of 2016. So what’s this, three weeks before the election? He’s talking about Trump. Now, the Breitbart story said… Hang on for the audio. It’s coming up. It’s only 16 seconds, so we’ll squeeze it in here.

“A previously unreleased audio recording of House speaker Paul Ryan telling Republican congressional representatives he would never again defend the party’s presidential nominee was published by Breitbart News last night, the latest salvo in the war between the beleaguered speaker and the far-right news outlets sparked by the introduction of the American health care…” This is a Daily Beast story, not Breitbart. They released the tape.

“The audio was recorded during a conference call between Ryan and Republican members October 10, 2016. It was three days after a decades old video surfaced showing then-Republican presidential candidate Donald Trump bragging about sexually assaulting women.” I guess this was the Access Hollywood video. So it’s three days after that video’s been released and in the recording Ryan is heard telling his party members he would not defend Trump then or in the future. 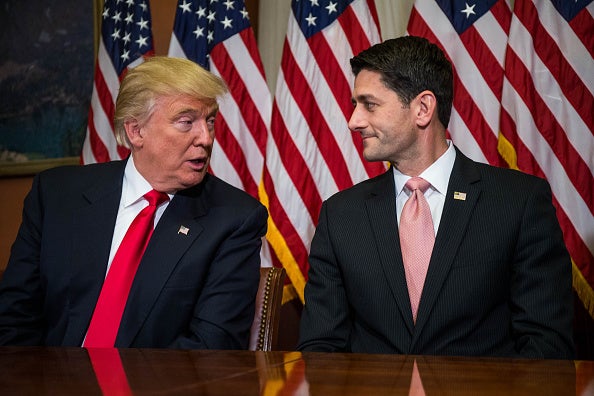 RYAN: I am not going to defend Trump. Not now. Not in the future. Look, you guys know I have real concerns about the nominee. This is gonna be a turbulent month. Um, but with respect to Donald Trump, I would encourage you to do what you think is best and do what you feel you need to do.

RUSH: Okay. So, now, that was about a specific event. I know. Look… (chuckling) I’m seeing the long knives everywhere. Here’s the question you have to ask if you’re gonna deal with this honestly. Here’s a question you have to ask… On October 16th, remember now, everybody thought Trump’s gonna lose then. Everybody. I don’t think that changes the long-term meaning. I’m just pointing it out.