CNN’s All Hot and Bothered About Rex Tillerson’s Emails

RUSH: You see that? You see what I’m pointing at? CNN has just come up. Well, it’s the New York state attorney general, a guy named [Eric] Schneiderman, I think. Apparently, CNN’s all hot and bothered, folks, ’cause they have an exclusive. You know what it is? Rex Tillerson, the former CEO of Exxon, used a secret alias for Exxon emails. (Gasp!) Really? The CEO of Exxon had a secret alias for Exxon emails. This is all meant to blunt whatever Hillary Clinton was doing with her illegal server. Exxon is not the United States government! 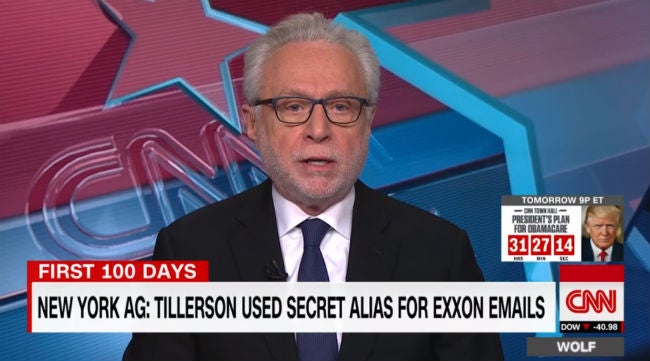 The United States government has completely different rules on communications, secure and otherwise, for employees, particularly ranking like the secretary of state for national security and so forth. For criminently’s sake here! I have email addresses… Well, part of my security is not telling everybody how many. This is just… It’s just ridiculous. So now we’re trying to make news out of the fact that Trump’s secretary of state — which is what Hillary was — had an alias at Exxon. Why would he have…?

You know, maybe he had some friends at Exxon that he wanted to be able to communicate with on private business, private matters that had nothing to do with the company. He could have an alias email address for privacy. How many of you people have email aliases? I don’t mean second addresses, but I mean an alias of your primary address or account? (interruption) Mmm-hmm. Are you kidding me? That’s what this is? You mean to tell me…? Okay, here’s the scoop on this. This New York attorney general, Schneiderman, is trying to say…

Let me see if I get this right. You correct me if I’m wrong. He’s trying to say that the reason Tillerson had an email alias at Exxon is because that’s where he admitted and talked about the truth of global warming with people. But he denied it, of course, in his official Exxon email. So what all this is about is that Tillerson actually knows and actually agrees that there’s man-made global warming, but as the CEO of Exxon he couldn’t dare admit it. So he used secret email address to talk to people about the real truth of climate change so he wouldn’t be tied to his CEO position.

Is that what they’re maintaining? And they’re gonna turn…? They’re trying to turn this into a crime? I mean, if the New York attorney general’s looking into it, they’re trying to say this is a crime? Well then, you know, Tillerson, put him on Undercover Boss and get to the truth of it. You’ve seen that show, right, Undercover Boss? (interruption) You don’t know what that show is? It’s where the real CEO of a company goes on TV and people that work there… He goes on not as a CEO. He goes on as an employee, and the other employees do not know he’s a CEO. 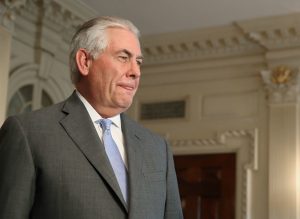 And they bitch, they moan, they whine about what’s wrong with the company. And the CEO or the manager, whoever, gets to sit there and learn what his employees think. Is that pretty close to what it is? Undercover Boss? This is just… (laughing) Well, they’re not gonna let go of this. Anything to get rid of the blemish on Hillary Clinton. That’s what all this is. Get rid of the blemish, get rid of anything… Which is why they’re trying to say that whatever Hillary and Trump did it, too; Rex Tillerson did it, too, and all this. It’s just it’s an ongoing, never-ending project to purify all of the corruption in the Democrat Party and on the American left.

RUSH: Somebody really needs to tell CNN that Rex Tillerson has publicly stated that he believes in global warming many times. The Atlantic January 11th, 2017, “Rex Tillerson Says Climate Change Is Real, but…” he’s come out in favor of a carbon tax as CEO of Exxon, a tax against his product, oil.

January 2009 he said that Exxon was in favor of a carbon tax. It’s not news that Rex — the Schneiderman AG in New York is claiming that Tillerson actually opposed climate change, but in his private alias email account he was admitting to everybody that it was true and he was worried about it. He said it publicly that he thought climate change was real.

But, you see, I, El Rushbo, am not convinced. It’s like the rich, like Gates and Buffett out there campaigning for tax increases on the rich. Of course they’re gonna say that. It’s how they keep the barbarians from their gates. It’s how they keep the people with pitchforks away from ’em. You know, if Gates and Buffett come out and say, “No, we’re for tax cuts for the rich,” then they’re gonna have the hordes bothering them. This is how you buy goodwill.

So the CEO of Exxon, Big Oil, hated Big Oil, if he admits that he believes in climate change and believes in the carbon tax, he just reduced the size of the company as a target, although not much because they hate oil no matter what the CEO is and what he says, but, anyhow.

RUSH: My old buddy Seton Motley just sent me a reminder. Remember the name Lisa Jackson? She ran the Environmental Protection A. Well, she resigned, retired, whatever. She’s been hired by Apple as the director of vice president environmental initiatives or whatever. The woman used alias email accounts at the EPA to stay in touch with activists and the like, and nobody went after her as a criminal. Of course it was the Regime, and Obama wouldn’t go after one of his own, but it’s not uncommon.