Salena Zito Is Still Trying to Explain Trump to the Media

RUSH: I’ve got a sound bite. Grab number seven. Salena Zito. We’ve interviewed her for the Limbaugh Letter. She’s a columnist, used to be at the Pittsburgh Tribune-Review, then the New York Post. She’s great. And she was one of the early predictors of Donald Trump based on her travels of suburban and rural areas of Ohio and Pennsylvania. And she was early on convinced that Trump was gonna win and somewhat handily because she was finding so many Democrats in traditional blue states that just loved the guy. 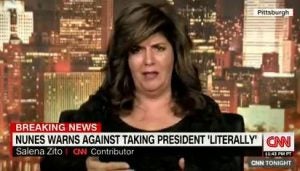 And she has stayed on this case. She stays in touch with people that she’s met during the campaign, takes their temperature regularly. And she was on CNN Tonight last night with Don Lemon. She does some work for the Washington Examiner as well, by the way. Lemon said, “People want to be able to believe what their president said. And no one can believe it’s actually not true,” meaning Trump claiming the White House tapped him and Trump Tower. So, you know, Lemon said, “People want to believe their president. But nobody can believe this. It’s not backed up by the evidence.” And here’s what Salena Zito said.

ZITO: I spent the day going down the Ohio River from Weirton, West Virginia, to Steubenville, Mingo Junction, just talking to people that voted for him, and they’re also all Democrats. One of the things we talked about is, you know, his loose use of words. And this one woman who described herself as a staunch liberal, she said, “Look, he is not a politician. That’s how he talks. He talks like a salesman. There’s this expectation of hyperbole. And it’s part of what we wanted. We wanted someone that was gonna not only just blow up the system, but just not talk like a perfectly measured politician.” And that’s what they got.

RUSH: Now, I have been trying in my own limited fashion for as long as Trump has been on the scene to explain to people that don’t understand him why people love him and how they hear him and how they see him. And I haven’t been able to convince I guess — well, I don’t know how many people I’ve convinced. The point is she’s exactly right about people.

It’s precisely because Trump is not a politician that he’s supported, and he is being supported for reasons that have nothing to do with following a political behavioral manual or a political playbook of any kind. He represents blowing all of that up in a figurative sense. He represents draining the swamp. The media has their blueprint for destroying Republican politicians. It’s never gonna work on Trump.

I said this to Chris Wallace on Fox News Sunday. I said they are not gonna believe me on this because that would be to accept their incompetence or ineffectiveness in this. But it’s no more complicated than this. The media didn’t make Donald Trump, and they can’t break him. If the media makes you, in other words, if you’re a star, if you’re a success, if you have popularity, if you’re an A-list celebrity and the media has had anything to do with manufacturing the reasons why, well, then they own you. ‘Cause if the media’s responsible for people thinking that you’re one way and that’s why they love you, the media can turn on you on a dime, and you’re sayonara history.

But that’s not the case with Trump because the media began trying to destroy him from the get-go. They haven’t been able to do it yet. And they’re not gonna be able to. So when Trump comes out and says, in a tweet, “Don’t you think it’s horrible that President Obama or Obama tapped my wires –” (laughing) it’s what he actually said — “tapped my wires at Trump Tower.” Well, as hard as it is for reporters and others to accept, people that support Trump know exactly what he means by that.

And when they come along and try to say, “That’s outrageous what Trump –” They know what Trump meant by it. He’s being surveilled! He’s being spied on! It makes perfect sense that Trump would be spied on by the people that don’t like hip. That’s all they hear. That’s all they know, and they agree with it. But here comes the media with their perfection specification, and it just falls on deaf ears. And they are not gonna learn it. They’re an obstinate bunch of people.

And I told this guy, “You people that support Trump, you’re all he has, so make it known that you haven’t lost any enthusiasm and everything’s gonna be fine.” That’s optimistic.