A Day Without Women Shopping?

RUSH: Did you see that today is a Day Without Women? Have you heard that? It’s something like that, Day Without Women rally. The organizers here are encouraging women not to shop. Now, how much do you want to bet that idea was cooked up by their husbands? You know that there have to be some men behind this encouraging women not to shop and making it some celebratory day. Where do you sign up, guys, right? (laughing) Where do you go to encourage this? I mean, that’s assuming many of marchers are married. That may be a big assumption when it comes to this march.

RUSH: You should see what I just saw on Fox News. You know the Trump speech to the joint session of Congress? A bunch of Democrat women showed up dressed in all white. I guess, eh… In what? Reaching out to their past association, the Democrat Party, with the Ku Klux Klan? I mean, all that was missing was the hoods. Well, now I just watched a bunch of Democrat women walk out of the Capitol Building all in red. It wasn’t a bunch of them, wasn’t a lot of them. It was some. And there’s some men, you know, following along, trying to get in the action.

It’s all about this International Women’s Day or some such thing. Why is it that when these women’s things happen, they all want to be alike? They all want to dress alike. They all want to be seen the same. What is up with that? I mean, I know it’s a political statement that they’re making here, but I’m thinking of the images that this stuff creates, the photo ops that it creates.

RUSH: This is Susan in St. Louis. It’s great to have you. How are you doing?

CALLER: I’m good, Rush. Thank you for taking my call.

RUSH: I love your phone. Whatever phone you’re on is the best phone quality I’ve heard on a phone call in I don’t know how long, so thank you. What kind of phone are you using?

CALLER: I am. I am at my business.

CALLER: No, I am not. I think this International Women’s Day is the absolute stupidest and most ridiculous thing I have ever heard of. These women, I don’t know what they are marching for, I don’t care what they’re marching for. I’m glad I have a job. I’m glad I have the respect from my employer. I’m glad that my employer can count on me to be at work to do the job that I’m being paid for. They are not moving us forward or doing anything for women. They’re setting women back. They’re telling their employers in this country that they’re not worthy of a job. They want to go back and, what, be barefoot and pregnant? Go ahead. I hope they all get fired.

RUSH: (laughing) All right! Well, let me tell you what I think is really going on. I’m gonna do this because you said you didn’t know why they were doing what they’re doing. I’ve got a theory, and it encompasses much. It will explain, if I’m right, much of why liberals do what they do in this current, modern era. But to understand it — and I had a piece I quoted the other day by Shelby Steele that helped me focus this belief — the modern era of liberalism, the one we’re living in, really has as its focus or foundation that America is unjust, immoral, and corrupt, and from the days of our founding.

So I think, you say, why are they marching today? Why are the college snowflakes, why are these Millennials incapable of dealing with anything other than what they believe? I think part of what’s going on is these women that get together and march today are actually self-medicating. What they’re saying is, they had nothing to do with America’s past. You can’t blame them. You can’t tie them to it. We’re good people. We’re not from America that is the reprobate America.

They’re trying to stand out and basically inoculate themselves from what they’ve been taught and what they now believe is the absolute rotten history of this country in the United States. And I think it explains not all, of course, I mean, the genuine rioting. Militant, destructive people have their own agenda, and it’s not about anything nearly as deep as this. It’s why the sports media, it’s why the mainstream media is now just so totally gone on race.

We are watching people who’ve been educated in the public school system and in colleges for the last 25 or 30 years become adults. They’re getting jobs as TV commentators and journalists and writers and editors and producers in the media. And we’re simply seeing the product of what they’ve been taught. And they so hate what they’ve been told is this country’s history and past that they want everybody to know they disagree with it and they’ve got nothing to do with it, and they had nothing to do with it, and don’t blame them. 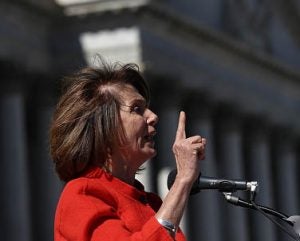 I think that’s a huge aspect. It’s not all. It’s not by any means the total explanation, but it’s essentially an immunization. They’re immunizing themselves against being associated with those horrible aspects of America that didn’t exist in the first place, not to the extent that they’ve been taught. There are probably other reasons why they’re out marching, to get noticed, to take the day off, some of them. They’re all unhappy. They’re all pretty much miserable. Because everything they believe in doesn’t work. It doesn’t make them happy.

They had eight years of their, I mean, king. Every problem they had was supposed to get fixed and everything got worse. So daily they have to face the reality that what they really believe in doesn’t work, and it doesn’t make people happy. So they’re perennially angry and irritated and so forth. It’s a multifaceted psychological explanation.

RUSH: One more email I got from a female friend who wants me to share with you her thoughts on this women’s march, or whatever this is, International Women’s Day. “Feminism, Mr. Limbaugh, is about one thing today, and that’s abortion. And abortion is immoral. And I believe, Mr. Limbaugh, they all know it. You can call it a choice, you can call it an unviable tissue mass, but it isn’t. It’s a life and they’re killing it, and they know it. It’s immoral.

“So to assuage the fact that they are supporting the immorality of abortion, they have these monthly rage rallies to scream about wages and wear these silly pussai hats and smile and blame evil white men. It’s the only way to make them feel better about themselves and have meaningful lives because deep down they know they are supporting immoral action.” And I just wanted to share that thought with you.