RUSH: Okay, now, let me deal with the Russians interfering with our elections. This is a laugh, it’s an absolute joke, and I’m telling you that everybody in Washington that’s acting offended and outraged and shocked by this ought to be ashamed. The prime minister of Israel is a man by the name of Bibi Netanyahu. He is hated and despised by much of the American Democrat Party — and Barack Hussein Obama, specifically, resented him. They have elections in Israel, and when Bibi Netanyahu was most recently up for reelection, the Obama presidency, the Obama administration, the Obama campaign sent campaign advisers, consultants, and advertising makers to Israel to interfere in the Israeli election by helping the opponent of Benjamin Netanyahu.

Do you hear anybody running around squealing and whining about the Americans interfering with the Israeli elections? You don’t, do you? It was widely reported. Folks, I’m not making this up. The Clinton campaign — James Carville and George Stephanopoulos — were routinely deployed to campaign for the candidates that Bill Clinton did not want to win in Central American countries, in certain European Union countries. “Yeah, Rush, yeah, but that was wide out in the open.” It’s interference! It’s interfering in the election!

And how did we know that everything they did was aboveboard? How do we know that the Obama team wasn’t trying to hack Bibi’s computer? How do we know the Obama team wasn’t trying to hack Trump’s network? The thing about this is that everybody in Washington — Republican and Democrat — acting like this was one of the greatest outrages ever in the world, ought to be ashamed of themselves. This is how the world works! The Chinese are in this country trying to undermine various things.

The Soviet Union had activists hired as professors at American universities, and many of them are still there. The Soviet Union had as a campaign to undermine American liberty and freedom from within, and it probably is still operative. We know these things! In some places, the Russian interference is welcomed– like on the college campus — and in other places, when it’s politically convenient, it’s opposed. But in terms of the Russians, what this story is really about… Please do not lose sight of this.

The only reason any of this is happening is because the Democrats lost the election and can’t get over it. That — coupled with Trump’s sincere, serious, and successful efforts to unravel much of the poison that they have infected this country with for the last number of decades — has got them fit to be tied. They are enraged. And so all they have is to try to convince people that Trump’s election is fraudulent. And, ladies and gentlemen, I’ve warned you: You’re going to get maybe frustrated with me.

But this is why I have not let go of this issue, because it’s all they have to try to stop and prevent Trump from succeeding, which is what you wanted him to do. You voted for Trump, and you knew exactly why. There’s no mystery to Donald Trump. He told you exactly what his agenda was five, 10 times a day. He told everybody who would listen! Most transparent candidate in my lifetime. He gets to town and he starts working on it, trying to implement as much of the agenda as he can. They’re scared to death!

They can’t beat him with numbers.

They don’t have the numbers in the House or Senate to stop him, legislatively.

He’s got the Supreme Court in the palm of his hand. Whenever there are vacancies, he got the appointment. They’re in full-fledged panic, and all they’ve got is Russia. And in terms of Russia, all they’ve got is trying to convince as many people as possible that the election outcome was fraudulent. That’s what Russian interference in the election is meant to mean. That’s how they want it interpreted. Well, there’s only one way to interfere in an election that really matters, and that’s somehow getting involved in the two things that happened with the votes. The votes are cast, and they are counted.

And there is no evidence that the Russians hacked any machines. The machines are not connected to the internet. They’re “air gapped” in many cases. There’s no way to do that. The Russians had nothing to do with the outcome of the vote in this country, and nobody will ever say they did that. Nobody will ever. That’s why they want to imply it. That’s why they want you to infer it. So all of this talk about Russian interference and Trump campaign people talking to the Russians? There isn’t any evidence that anything happened. There is none! They don’t have any.

That’s why they keep demanding and calling for an investigation. There isn’t any evidence! They’ve been looking for evidence. The FBI has been looking for evidence for over a year. Nobody has any. So they can’t leave it to reality. They have to try to use PR, buzz, spin, and try to convince as many people as possible that the Russians hacked Hillary’s email, John Podesta’s email. “All of these embarrassing emails that were made public by WikiLeaks, the Russians did that!” There isn’t even any evidence for that. There’s a lot of supposition. There may be some circumstantial evidence.

But nobody can prove it, nobody has proven it — and interestingly, nobody in the Clinton campaign or Podesta has denied any of the allegations or the contents of any of Podesta’s emails. There hasn’t even been any polling data on what effect those emails had on the way people voted. We don’t even know that! I would be suspicious if we did have polling data on that; I don’t care how it turned out. So, folks, this is all they’ve got is the attempt, the effort to make it look like some massive — really, really dangerously bad, unprecedented — event of tampering with the sacred elections of the United States happened last year.

And again, I just want to remind you that as recently as December, Barack Obama himself said there was no evidence that Russia tampered with votes in the election. He tamped it down. He pooh-poohed the whole thing. Now, the New York Times. The New York Times has a story today which is trying to piggyback on a Washington Post story about Jeff Sessions. Essentially, what the New York Times is saying is that the Obama administration was so concerned about what they saw in terms of contact between Trump people and the Russians, and what they saw — the things they saw the Russians trying to do — was so bad that they ordered all of that evidence preserved.

It was so bad, it was so scary, it was so frightening, that Obama administration officials ordered that evidence chain to be preserved for investigators later, should they need it. The New York Times says the campaign to sabotage Trump “was multifaceted but was not directed by Obama himself.”

Obama doesn’t have to. Remember the Lois Lerner situation at the IRS when she was not granting tax-exempt status to Tea Party fundraising groups? And do you remember people said, “Well, we gotta find a smoking gun. We need to find a memo from Obama telling Lois Lerner to do that.” I said, “You’re never gonna find one because there isn’t one. Lois Lerner doesn’t need instructions. Lois Lerner is at the IRS precisely because the people who put her there know she’s capable of understanding what to do and how to do it. There isn’t gonna be a smoking gun.”

So now they’re saying, “Well, yeah, the campaign to sabotage Trump was multifaceted, was not directed by Obama himself.” It didn’t have to be. You think Eric Holder needed to talk to Obama to know what Obama wanted? Do you think these people trying to sabotage the Trump administration have to talk to Obama to know how to do it, to know what to do? They do not. They’re all on same page. They’re all the same people. They’re all the same leftists, and they have the same modus operandi. 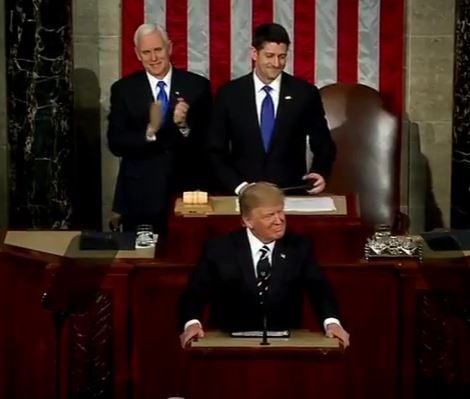 Obama is doing what he always does. He is an organizer. He’s a community organizer. He’s organizing behind the scenes and in the streets. We know how it works because James O’Keefe’s Project Veritas videos have captured it in progress. The catalyst for these stories today is Trump’s speech before a joint session of Congress on Tuesday night. That speech upset every consideration the Democrats had for the future.

They had believed that Trump would never understand the real ways of Washington and therefore would never really ever be able to get anything done. He’s too rough around the edges. He’s too raw. The Republican leadership doesn’t like him. He’s never gonna really get it. Then he gave that speech and all of that is now out the window. In fact, The Politico: “With a Single Speech, Trump Rattles 2018 Landscape — The idea that Democrats have to start taking the president more seriously as a political operator suddenly has more currency.”

That’s why the Jeff Sessions story has ratcheted up today in the Washington Post.
This New York Times story is not a new story. It’s just a rehashed, rewritten story that appeared first last October and has now appeared again back in late January. This is the third version of the New York Times story alleging that there were contacts between the Trump campaign and Russians to do what? Well, we don’t know yet. We need to investigate. We need a special prosecutor. We need to dig deep. In every one of these stories you will find a reference to the fact that, so far, evidence has not been found of a direct link between Trump and Russian officials and the election. They haven’t found it.

But that’s not stopping them. In fact, that is what’s fueling the call for a special counsel, an independent prosecutor, a further FBI investigation. Because it’s all the Democrats have.

RUSH: Okay, folks, I want you to listen. This is President Obama last December 12th on The Daily Show.

OBAMA: Russia trying to influence our elections dates back to the Soviet Union. What they did here, hacking some emails and releasing them, uh, is not a particularly fancy brand of espionage or propaganda. We were, frankly, more concerned in the run-up to the election to the possibilities of vote tampering, which we did not see evidence of and were confident that we could guard against.