RUSH: Now to immigration. “The Department of Homeland Security to Expedite deportation proceedings by not using Judges.” This is in The Daily Caller today. “With immigration courts reaching a record backlog in 2016, Secretary of Homeland Security John Kelly ordered Monday that illegal immigrants who have been in the U.S. for less than two years should be allowed to be deported without a court hearing. … ‘It is in the national interest to detain and expeditiously remove from the United States aliens apprehended at the border, who have been ordered removed after consideration and denial of their claims for relief or protection,'” and not go through judges, “Kelly wrote in one of the two memos.”

Now, see, this is the loophole that the Obama administration discovered and publicized and which caused the flood of unaccompanied minors from countries not contingent to the U.S. That’s countries other than Mexico like El Salvador, places such as that, and it’s high time something was done about this loophole, which raises the question: Why hasn’t the Republican-controlled Congress closed it?

The loophole is: “Existing immigration law allows an immigration officer to order the removal of an illegal immigrant without a court hearing, unless the illegal immigrant is an unaccompanied child or is applying for asylum.” That was the loophole. I remember talking about this when we were flooded with these kids via the train rides from all parts of Central America. That’s what’s been shut down here, simply by an act of the Department of Homeland Security. It could have been done at any time.

But you really can’t erase or ignore the racial component whether asking, “Why didn’t Republicans stop this?” They just we’re not going to. And it’s clear. Townhall. This is Katie Pavlich. This also is from — let’s see — a couple days ago. February 21st. “Trump Administration Strips Funding For Illegal Aliens, Reallocates Money to Victims of Their Crimes.” I don’t know how many people heard about this, but this is huge.

“Speaking from the White House briefing room Tuesday, Press Secretary Sean Spicer announced the development of a new Immigration and Customs Enforcement office focused on helping victims of crimes committed by illegal aliens. The office will also assist family members of victims and is part of President Trump’s recent executive action to bolster enforcement of immigration laws already on the books. … [DHS Secretary] Kelly immediately ordered the Director of ICE to ‘reallocate any and all resources that are currently used to advocate on behalf of illegal aliens to the new [Victims of Immigration Crime Engagement] Office.”

So that money is being reallocated to the families and victims of illegals who have committed crimes against them. This could have been done at any time. Well, Obama would have stepped in and tried to stop it. Look, that’s another thing. I don’t want to be too hard here on the Republicans. What I’m trying to point out is that what Trump is doing could have been done. You might say, “Well, it does require some courage to do it.” Well, he’s got some courage because he’s got a mandate because he was elected on premises just like this.

But the fact is he’s doing it. He’s implementing the things he said he was gonna implement, and one of the things he spent a lot of time on was how the victims of crime committed by illegals are just ignored. Much like no pressure was ever brought to bear on sanctuary cities. From Investor’s Business Daily: “Democrats Attack Trump for Enforcing Their Own Immigration Law.” This is what I meant earlier. “The deportation rules announced this week by Department of Homeland Security Secretary John Kelly were greeted with the expected outrage from the usual suspects.

“But since when is enforcing the law a crime? In this case, the law that Kelly plans to enforce is the 1965 Immigration and Nationality Act, which was approved by 52 Democrats in the Senate and 202 Democrats in the House in a Democrat-controlled Congress and was signed into law by President Johnson, a Democrat. That hasn’t stopped today’s Democrats” from bellyaching and whining and moaning that the memo enforcing… It’s a six-page memo! What?

That’s how far off the reservation all of this has gotten. This isn’t even… When you get down to it, this is not even really new restrictions yet. This is just phase one, enforcing existing law, and the Border Patrol agents are energized. They’re enthused. They’re finally no longer called “rogue” when they go out and do their jobs. This is causing all kinds of crazy protests at these Republican town halls as well.

RUSH: Here’s Mark in Manhattan. Mark, I’m glad you waited. Great have you on the program, sir.

RUSH: Hold it. Are you talking about the travel ban?

RUSH: You’re talking about the Seattle Judge and the Ninth Circuit Court?

CALLER: Yes, and I think they mentioned the technical companies couldn’t bring in foreign employees. And, you know, the real injured… They’re taking these H-1B visa people —

RUSH: Exactly. That is the biggest crock, the biggest phony. Besides, it has nothing to do with the law.

RUSH: Those courts have still not ruled on the law, which they couldn’t because the law is crystal clear. Trump has the power by proclamation to do what he did. They used such nefarious things as, “Well, you know, the president said that he wanted to ban all Muslims during the campaign.” That’s what the Seattle judge said. “So we have to take that into account.” No, you don’t take that into account. But your point about the H-1B visas is exactly right. These tech companies are whining and moaning, “We can’t get our employees in.” Well, all you’re doing with them is replacing Americans, and you’re paying the H-1B half or less what you’re paying the Americans. 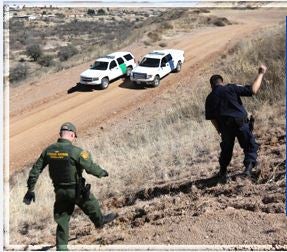 CALLER: Right, and the H-1B visa people can’t look for another job. I’m an unemployed PhD myself.

RUSH: Well, that’s what — and at Disney, the employees had to train their H-1B replacements. Yeah, that’s a straw dog argument. That was just, “Our poor tech companies can’t get our really high-qualified foreign workers in.” Well, then you won’t be able to fire an American in the process. How about that? But let me tell you: There’s something else going on out there. Like this story. I have it right here. “Why Trump’s Immigration Crackdown Could Sink U.S. Home Prices.”

I just got another, an email: “Immigration Policies are Destroying the Arizona Economy.” This is all a crock, folks. This is all BS. This is the Drive-Bys and the left trying to make you think that what Trump is doing is damaging the economy by getting rid of legitimate, hardworking people, blah, blah, blah. This is first being enforced on criminals! Criminal illegals. It’s being enforced on criminals, those who have been victimizing, who might be convicted, who might be charged, who have been charged. That’s who’s being deported first. But you be on the lookout for this: Trump’s immigration policies are destroying the Arizona economy and destroying home prices. It’s all a crock, as much in the media today is.