RUSH: Either I’m missing something or they expect fisticuffs to break out at this thing. What is the big deal? (interruption) Well, no, at CPAC. The Conservative Political Action Committee conference, whatever. They got their annual three-day convention going here, and the media is breathless. They can barely contain themselves because Reince Priebus and Steve Bannon are gonna appear on a panel together. It was supposed to start five minutes ago. But, as things these things always happen, everybody’s running a little bit late. 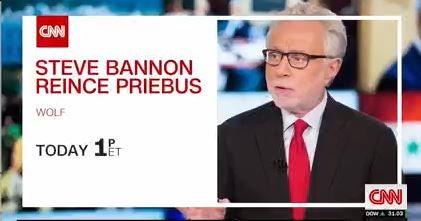 Are they then expecting Bannon to take over the whole hall and hijack everybody and not let ’em out until they swear allegiance to Trump? (laughing) What are they expecting to happen? You know, this is… I watch this in amazement. I really do. And it’s all of them, including Fox. It’s every network, and all of this is the result of previously written media narratives, and they expect some kind of news to be made. These guys have been working with Trump in the White House since Trump was inaugurated and even before he was elected, and for some reason… 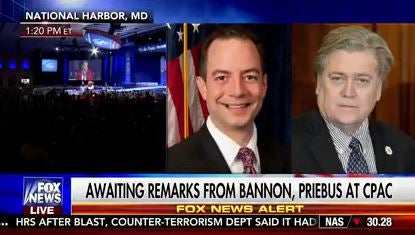 I don’t know what they expect to happen here. Now, there may be some lingering aspects of, “Well, you know, we’re the Conservative Union, and Trump’s really not one of us, and maybe these guys are gonna come up here and try to tell us why we should accept Trump.” But I don’t think that’s what it is. I think they’ve got themselves believing that Bannon is trying to get rid of everybody: try to get rid of Kellyanne Conway, try to get rid of Spicer, try to get rid of Priebus.

Basically try to shut down the West Wing so that the only person is him and Trump in the Oval Office. And they supposed to see evidence of this today? What, is Bannon gonna show up and be aloof and disrespectful, is gonna start insulting Priebus? I don’t know. This stuff amazes me. I guarantee you whatever happens, the media is going to report that they were stunned and that they were shocked and that they were surprised by it. As I say, there are a lot of… You know, the audience at CPAC… (coughing)

But the audience at CPAC is made up of… You’d be surprised at the number of young people who show up at this thing every year. I made my first national address there. My first televised address to the nation ever was a CPAC speech, and that was back in 2009. That was Obama’s first year. Eight years ago? Is that right? Eight years ago I did that speech? Son of a gun. And it was overwhelmingly well received and accepted.

As I pointed out, Trump’s cabinet graded by this bunch as 30 points more conservative than even Reagan’s. And it does make me wonder why the Never Trumpers… You know, I read a whole bunch of Never Trumpers still every day, and they’re still ticked. They’re still lived. They’re still mad. And it’s all about Trump’s behavior. They think Trump makes things up and lies. They think he’s off his rocker. They think he’s gonna end up embarrassing everybody, including them and getting them in trouble, and that you can’t trust Trump and he doesn’t know anything and he doesn’t read anything and he’s just a flat-out embarrassment.

And yet, I can’t recall a Republican president since Reagan who’s gotten anywhere near this much done, or at least made the effort to do so fearlessly. I know it’s still early. But it has to be substantively much different than what the Never Trumpers believe, because the Never Trumpers believe that he wasn’t conservative in the first place and at all and was essentially fooling everybody and that we were all being fooled and stupid. And those of us that didn’t see it, we were gonna be profoundly embarrassed and discredited inside two months of Trump being inaugurated or some such thing.

And I think many of them are still waiting for it to happen. 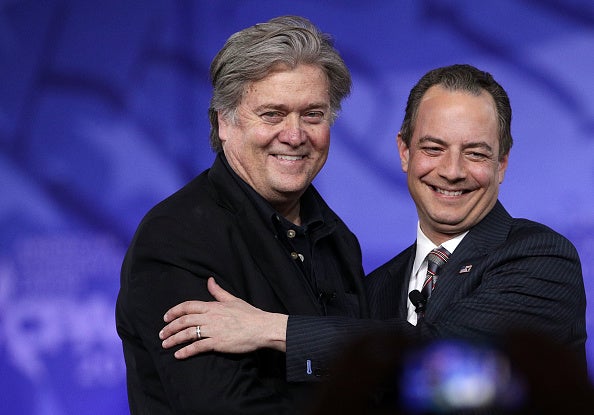 RUSH:  The Drive-By Media has to be distraught.  Reince Priebus, Steve Bannon are on the stage together at CPAC, and they’re getting along.  That was not supposed to be the case.  Bannon was supposed to shoot Priebus today in a duel and get… (interruption) Well, I know it’s not… (laughing) That’s right. “It’s not over yet.” Bannon can still bring out the fisticuffs.  Anyway, they’re both singing the praises of Trump.

And Priebus just mentioned that Trump spoke at CPAC four or five years ago. You go back and look at it, and he spelled out his agenda.  Trump’s real, he’s who he is, and he doesn’t stop until he’s accomplished what he wants to accomplish.  And, folks, if I may, that is what is making me not worry about what’s going on in Congress right now because we do have Trump and he does succeed at what he wants. And when he gets around to it, he’s gonna get around to it, and they haven’t been able to stop him yet.  They’ve been trying since the summer of 2015, and they can’t.

RUSH: Now, I heard Reince Priebus answer a question from Matt Schlapp. Matt Schlapp is guy running CPAC, the American Conservative Union, and he asked him if he thought that the opposition to Trump would simmer down over time, and he said he thought it would. Which is, I think, a natural thing for chief of staff and former chairman of the Republican National Committee to say as a party man. I don’t think that at all. I think it’s gonna continue this way. I don’t think the press is gonna slow down ever.

I don’t think the press can ever peacefully coexist with Trump.

I don’t think… It’s gonna stay like it is or get worse. The real question to me is can the left and all of this bought-and-paid-for opposition maintain itself, because that’s what the press feeds off of. The left and their bought-and-paid-for opposition — such as showing up at town halls or just showing up in the streets on random days in New York, Washington, and Philadelphia to make it look like they’re just generally angry. That’s what allows the media to join the fray of anti-Trumpism, and if that stuff ever…

If they run out of money, if they figure it’s money being wasted, if they run out of energy, or if they’re exposed for the frauds they are, then the media would have to carry this anti-Trumpism more on their own shoulders, and… (sigh) I think they will. I think this… Everybody involved in this on both sides probably thinks this is ballgame for who’s gonna win and what kind of country we’re gonna have. I would love for Priebus to be right about this. I just don’t think that’s gonna be the case.