Trump and His Cabinet Will Get the Economy Going 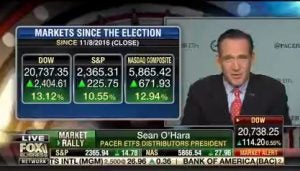 RUSH: Audio sound bite time. This was Fox Business Network late yesterday afternoon, the program Countdown to the Closing Bell. The fill-in host Ashley Webster, a guy speaking with Pacer ETFs Distributors President Sean O’Hara about the economy and Trump. Question: “There’s a lot of sentiment and emotion as part of this stock market rally I think in the sense of optimism, Sean. Do you think that’s well based? I mean, it just seems that business optimism, consumer optimism, housing market slowly turning around, it’s all pointing in the right direction.”

O’HARA: Optimism begets more optimism. The market seems on a tear. I was listening to something on the radio on the way down here. I was listening to Rush Limbaugh, and he said something which is right, which is obviously — Rush is always right, but he said, look, Donald Trump is up against so much resistance here, not only from Democrats, but also from people in his party. So if they’re not gonna cooperate with him, he’s not gonna get what he wants done, and that could be a big problem. But just like they did in the primaries and the election, I don’t think anybody should discount the president, especially Mr. Trump. He will, I think by sheer force of will, play the game his way and get what he wants to get done.

They can’t get it into their heads who’s calling the shots. On one hand over here Trump is this giant Godzilla that’s come in and just stomping all over everything and on the other hand he’s this idiot narcissist fool that doesn’t know anything and all of his advisers are running the show.

RUSH: This is Ted, Spring Lake, Michigan. Welcome, sir. Great to have you with us. Hi.

CALLER: Thank you very much, Rush. Mega dittos from the Great Lakes State of Michigan. 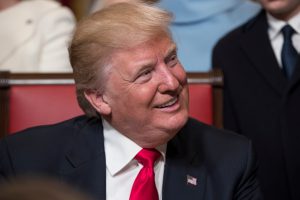 CALLER: I want to thank you so much for taking my call and also thanking you for everything that you have done in your efforts to have Mr. President Trump elected. Also I have two issues that actually are related to one another, and I want to get your input on them. The first one is, besides yourself and a handful of others, nobody is really talking about what we are seeing in the stock market. It’s unprecedented.

We shattered the 20,000-point ceiling, and we are three-quarters of the way to 21,000 at this point. With that said, we have a Federal Reserve chairman that is stating that she is going to start raising the interest rates, which I believe is a partisan move on her part. What do you think President Trump can do to offset that should she go ahead and proceed, and how do you see her doing that. If she raises the interest rates, how that’s gonna affect us?

RUSH: Okay, remember that no matter what they say, everybody’s political.

RUSH: The Federal Reserve is political. No matter what they say. Every institution in government is political. Sadly, it’s what’s happened. I assume you’re talking about Janet Yellen?

RUSH: Yeah. See, the theory here, folks, is that the stock market going up such means that the U.S. economy is roaring and the Federal Reserve has for decades been afraid of economic growth. They think they got to get a handle on it ’cause they’re really afraid of inflation and so they think raising interest rates will slow down economic activity, which also slows down jobs, slows down hiring. It slows down productivity and wage increases all at the altar of stopping inflation.

Well, the dirty little secret is that inflation’s been going nuts like it always does. I mean, there are certain market items that are down, like oil is down, gasoline prices are down. But there are other things that cost you much in more today than they did two years ago, and that’s due to inflation. Now, the Fed is ostensibly immune and independent, and thus Trumpster cannot call her up and demand that she not raise interest rates.

Now, there are other ways. The Treasury secretary can go do things. He has contact with ’em.
Other economic things, if she raises interest rates, if they do this, are there countermeasures that — well, yeah, get going on cutting taxes, get going on tax reform. That should happen regardless what the Fed does. But your question really is are there people at various levels — the Federal Reserve is not part of the government, but for the sake of communication, everybody thinks that it is, so let’s just, without getting too technical here, the question is, if the Federal Reserve is raising interest rates, is it a purposeful move to harm Trump politically?

Just like they kept interest rates nonexistent to help Obama and his phantom recovery. Absolutely. Look, the Federal Reserve is practically the grand ballroom of the globalists’ big club. But what can happen if she does raise rates, what Trump’s recourses are, they’re limited. He can’t browbeat her and they can’t fire her. You know, she has a term, and I don’t believe — like he can fire the attorney general, I don’t think he can fire — I have to check. I’ll double-check this, but I think they’re fully, completely, ostensibly independent. The Fed’s congressional mandate is all about trying to keep full employment which is why they get so concerned about inflation. Anyway, I appreciate the call, Ted.