“Protections” Is the New Liberal Word for Regulations 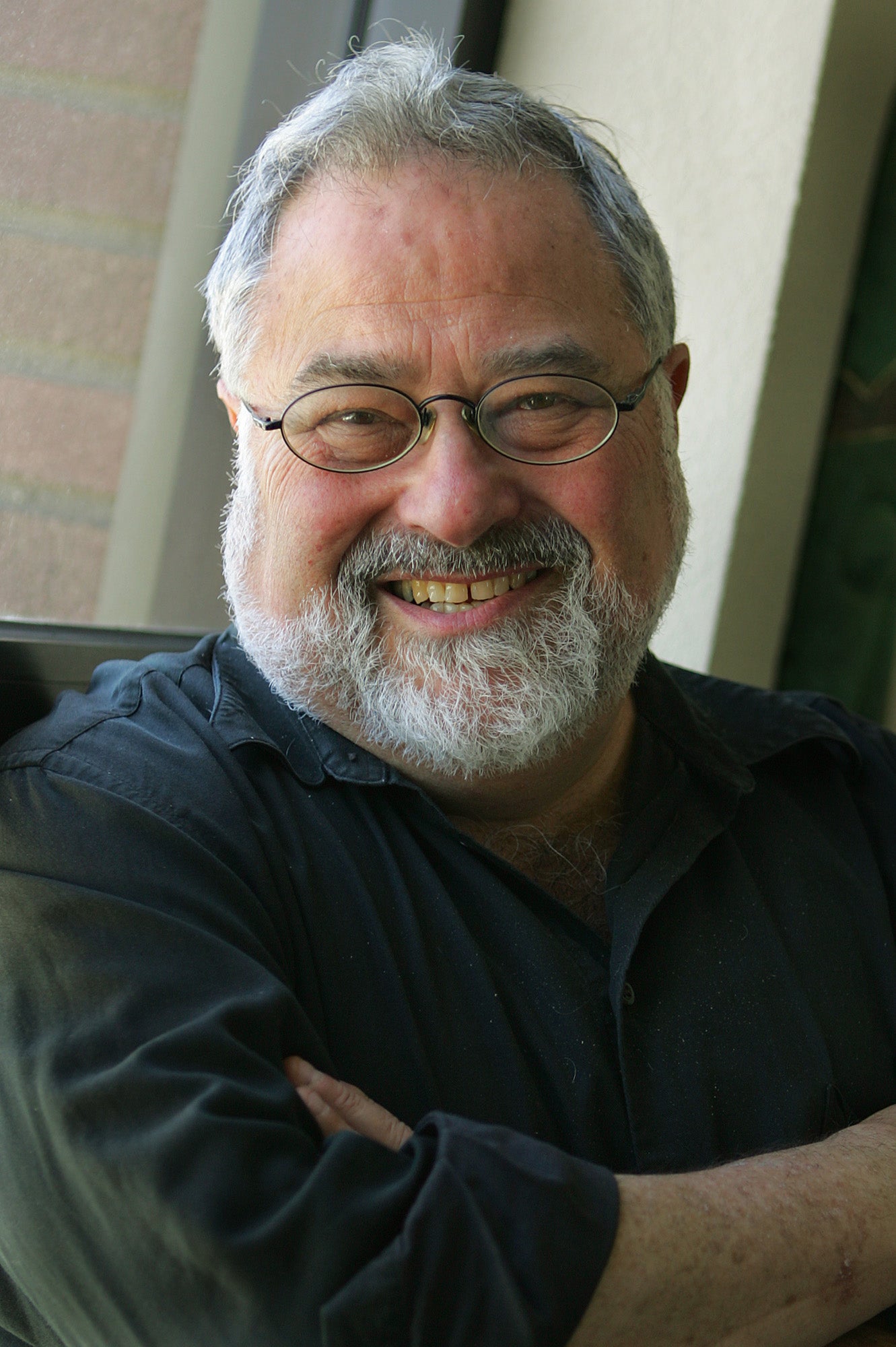 RUSH: To Trump executive orders and action here. I want to start with this, because I don’t… This is gonna drive ’em nuts out there, and it’s gonna cause even more fevered protests and anger and anguish if it happens. I mean, it may not even need to happen, just Trump is thinking about it. The New York Times: “Trump Appears Set to Reverse Protections for Transgender Students — President Trump appears on the verge of reversing protections put in place by the Obama administration to stop discrimination against transgender students in schools, [supposed] officials said Tuesday.

“Civil rights advocates said that the possible rollback of protections, which could come as soon as [today], would represent a major step backward after the enormous progress made by gay and transgender people in recent years.” Um, Mr. Snerdley, Official Program Observer? He’s really frustrated at a caller in there. I can tell it. He’s gesticulating wildly in there. It’s not worth getting all frustrated. You can say, “Thanks for calling and call back on Open Line Friday,” and hang up. He gets into arguments with them in there.

We’ve had to suspend him. I had to suspend him once for 45 minutes and just took raw calls, didn’t screen ’em, ’cause he was being so mean to ’em in there. (sigh) Anyway, can somebody explain to me what is the commonality of homosexuals and transgenders? Why are they politically aligned? I mean, you look here and it says “civil rights advocates.” Don’t tell me the civil rights angle. That’s not what it is. I mean, it may appear to be. “Civil rights advocates said that the possible rollback of protections put in place by the Obama…”

Be it in housing, be it in any kind of business, be it environmental, it’s all now gonna be called “protections.” And right there it is (shuffling paper), in the New York Times: “President Trump appears on the verge of reversing [regulations] put in place by the Obama administration…” Obama introduced regulations, but they’re now being called “protections.” Folks, do not fall for this. This is a word game trick, and the purpose is very clear. It’s to make it look like Trump is endangering people that Obama previously “protected.”

Yeah, Obama had this cloak of protection put over all these groups! Now Trump’s coming in and he’s gonna reverse these protections. Make a note. I’m gonna be reminding you of this frequently. This is the latest Democrat trick with the language and with the lexicon to convince people to oppose the relaxation of burdensome regulations, which in many cases have been placed on individuals and businesses without having been passed as laws. 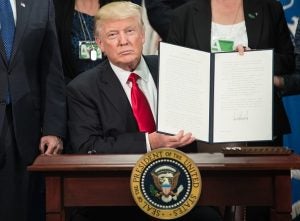 They just get written by these embeds in the bureaucracy, at the EPA, at the Department of Justice –, any number of places — Fish and Wildlife, Department of the Interior. They just issue these regulations. And they hamper… Like puddle of water in your backyard can now make your backyard a wetland, and you can’t mow the grass. You can’t do anything. It’s not your property essentially because of a regulation. Now Trump’s gonna roll back these “protections.” So just keep a sharp eye, ’cause I predict we’re gonna be seeing this thousands of times a week.

(interruption) Right. (interruption) Okay. (interruption) Well, see, you know what it is. The homosexual community had much progress, faster than they thought they were gonna get it on the battle. They thought that was gonna be a 20-year battle, and then here came Anthony Kennedy and the Supremes. (laughing) “Sure! Sure, absolutely.” (laughing) So, I mean, what is there left to complain about? (laughing) So they had to align with the next group that’s being discriminated against every which way you look at, and that’s the transgenders — and transgenderism became the new homosexuality that was besieged and set upon, and it’s to continue the activism of gay activists, give them an arena to continue their activism.

(interruption) “How many transgenders are there?” Doesn’t it depend on what day you ask? Transgender can be either/or, depending on the day, right? One day they could identify female, and the next day they could identify male. Is that one or two transgenders? (chuckles) But what is the…? I’ve seen no estimates, but I have to say it’s less than one-tenth of 1% of the population. And the gay population best guess — not guess — is 3%. So, anyway, this word “protections” shows up 10 times in this New York Times article. I’m telling you, it’s gonna be used thousands of times over a week. 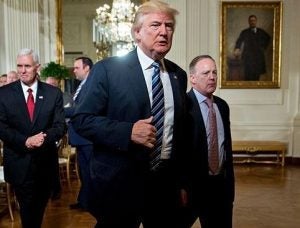 But to many people sounded like a good idea. Theoretically AmeriCorps swas a program where American youths could basically earn free college by working and helping their communities. It was a way of converting young skulls full of mush to socialists, obedient socialists who owed the state for whatever they had, ’cause there’s this word “free.” (Clinton impression) “Hey, you know what we’re gonna do? (chuckling) We’re gonna give you a free college education! You know what happens when you go to college and you see the women at those places?

It was Clinton’s version of the Peace Corps. It was a domestic version of the Peace Corps. Clinton loved JFK. They had a lot in common in the bedroom and the backseat of the car, and so it was his attempt to be like JFK with a similar kind of program. Now, on the surface, and if you don’t understand the inherent issue with any government program, it sounds like a great way to help people get their education. Oh, man, it sounded great, free education, and they get to learn community service, wow, nothing could be better.

But that’s, of course, not what it was. And the proof that that’s not what it was, it never reached the level that Bill Clinton envisioned. A whole bunch of skulls full of mush didn’t sign up for it, and now AmeriCorps is on the Trump chopping block along with the National Endowment for the Arts and Humanities. You believe this? Do you know what things we’ve been given by the National Endowment for the Arts? Try this. Try nude chocolate covered performance art. Some woman nude wrapped herself in milk chocolate, went out dancing on stages. It was called performance art. It was funded by the NEA.

Another artiste by the name of Andres Serrano got really mad at the pope one day and put his crucifix in a jar of urine, and it became an art display traveling from museum to museum to museum because of an NEA grant. And then there’s the National Endowment for the Humanities. Anyway, these are the chopping block along with AmeriCorps, and college officials are freaking out.

“The Trump administration is circulating a list of programs to eliminate — The list, revealed by The New York Times, also includes the National Endowment for the Arts and the National Endowment for the Humanities, previously reported to be targets for elimination in the first Trump budget. … In the case of AmeriCorps, the program was a major initiative of President Clinton, and has long been associated with him.” Hillary tried to get in on it, too. You know how this was all sourced? Oh, and here: “Trump Administration Poised to Change Transgender Student Bathroom Guidelines.”

The Washington Post hasn’t gotten the memo on protections yet. You watch. They’ll see it in the New York Times today and I’ll guarantee you everything tonight starting tomorrow, the New York Times will also start changing “guidelines” to “protections,” “regulations” to “protections.” The idea that Trump is going to change transgender student bathroom guidelines is according to a draft of the letter obtained by the Washington Post. So somebody in the Trump administration is leaking this to the Washington Post, and so now these various groups are gonna be all hotwired and ready to go.